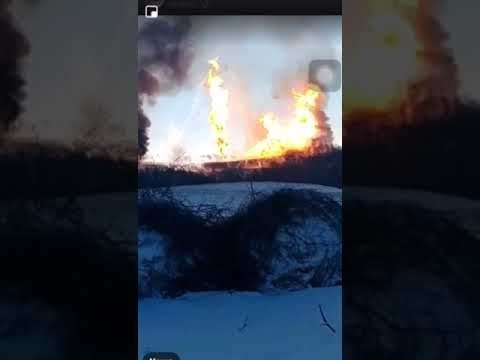 At least two people were reportedly injured and two homes are believed to have been damaged in the incident.

“We got reports flames were shooting (up) 80 feet to 200 feet (25-60 meters),” Chasity Schmelzenbach, emergency management director for Noble County, Ohio, told Reuters. “You could see it upwards of 10-15 miles (16-24 km) away. Lots of people thought it was in their backyard because it does appear large.”

The Canadian energy transportation company
confirmed that the incident occurred on its 30-inch Texas Eastern pipeline. The pipeline was built in 1952-53 and an in-line inspection was performed in 2012, “and no remediation was needed,” Enbridge said.

The fire has been contained and residents near the incident have been evacuated, the company said, adding that “field operations immediately started to shut in and isolate that section of pipeline.”

“Our first concern is for the safety of the community and our employees,” Enbridge said. “We have activated our emergency response plan and are cooperating with authorities in our response.”

Noble County resident Trina Moore, who lives 7 miles from the scene, told The Daily Jeffersonian that the explosion caused her home to shake.

The 9,029-mile Texas Eastern pipeline carries natural gas from the U.S. Gulf Coast and Texas to high demand markets in the northeastern U.S., according to the operator’s
website. It’s not yet clear if the shut-in will impact its customers, Reuters noted.

In October, another Enbridge-owned pipeline exploded in rural land north of Prince George, British Columbia, forcing 100 people to evacuate from the nearby Lheidli T’enneh First Nation.

Enbridge is the same company behind the proposed
Line 3 oil pipeline in northern Minnesota and the contentious Line 5 oil pipeline, which is notable for a section that runs along the bottom of the Straits of Mackinac, a narrow waterway that connects Lakes Huron and Michigan.