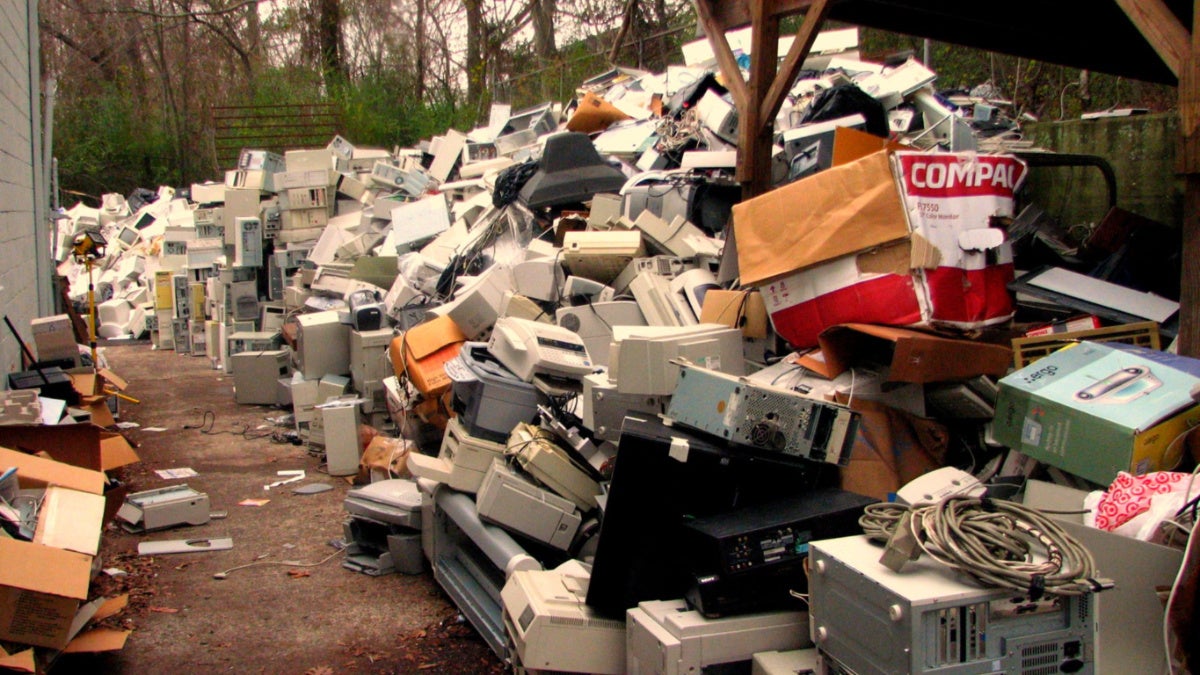 Billions worth of valuable metals such as gold, silver and copper were dumped or burned last year as electronic waste produced globally jumped to a record 53.6 million tons. Curtis Palmer / CC by 2.0

Billions worth of valuable metals such as gold, silver and copper were dumped or burned last year as electronic waste produced globally jumped to a record 53.6 million tons (Mt), or 7.3 kilogram per person, a UN report showed on Thursday.

Growing demand for electronic gadgets, mostly with short life cycles and few options for repair, has caused e-waste — discarded products with a battery or plug — to surge by more than a fifth in the past 5 years, according to the joint study by the United Nations University, the UN Institute for Training and Research, the International Telecommunication Union and the International Solid Waste Association. The report forecasts the amount of e-waste generated to top 74 Mt by 2030.

“We are seeing a growing middle class in many countries around the world, which a few years ago were really typical developing countries. And there is a very large backlog demand here,” Rüdiger Kühr, director of the Sustainable Cycles Program at the United Nations University (UNU) and a co-author of the report, told DW, adding that a growing trend of things like cars and bicycles being electrified was also contributing to the menace.

The weight of e-waste produced in 2019 was equivalent to 350 cruise ships the size of the Queen Mary 2, one of the largest cruise ships in the world, the authors of the report said.

Less than a fifth of the scrap — which the authors referred to as “urban mine” — was known to have been properly collected and recycled, which means a vast bulk of the billion (€50 billion) worth of valuable metals such as gold, copper and iron and other recoverable materials were dumped or burned rather than being collected for treatment and reuse.

“E-waste quantities are rising three times faster than the world’s population and 13% faster than the world’s GDP during the last five years,” said Antonis Mavropoulos, president of the International Solid Waste Association. “This sharp rise creates substantial environmental and health pressures and demonstrates the urgency to combine the fourth industrial revolution with circular economy.” 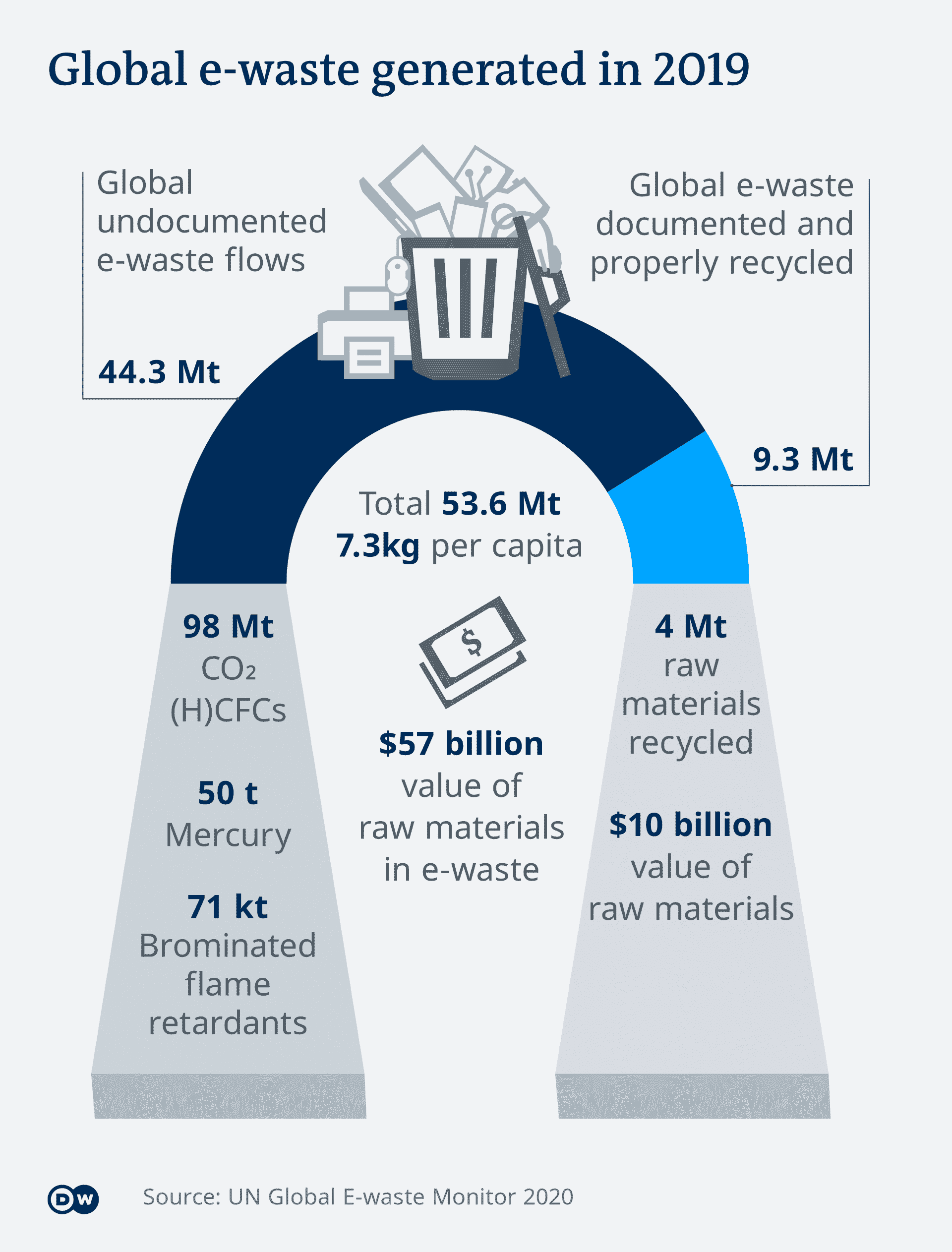 Simply throwing away electronic items without ensuring they get properly recycled leads to the loss of key materials such as iron, copper and gold, which can otherwise be recovered and used as primary raw materials to make new equipment, thereby reducing greenhouse gas emissions from extraction and refinement of raw materials.

Refrigerants found in electronic equipment such as fridge and air conditioners also contribute to global warming. A total of 98 Mt of CO2-equivalents, or about 0.3% of global energy-related emissions, were released into the atmosphere in 2019 from discarded refrigerators and ACs that were not recycled properly, the report said.

E-waste contains several toxic additives or hazardous substances, such as mercury and brominated flame retardants (BFR), and simply burning it or throwing it away could lead to serious health issues. Several studies have linked unregulated recycling of e-waste to adverse birth outcomes like stillbirth and premature birth, damages to the human brain or nervous system and in some cases hearing loss and heart troubles.

“Informal and improper e-waste recycling is a major emerging hazard silently affecting our health and that of future generations. One in four children are dying from avoidable environmental exposures,” said Maria Neira, director of the Environment, Climate Change and Health Department at the World Health Organization. “One in four children could be saved, if we take action to protect their health and ensure a safe environment.” 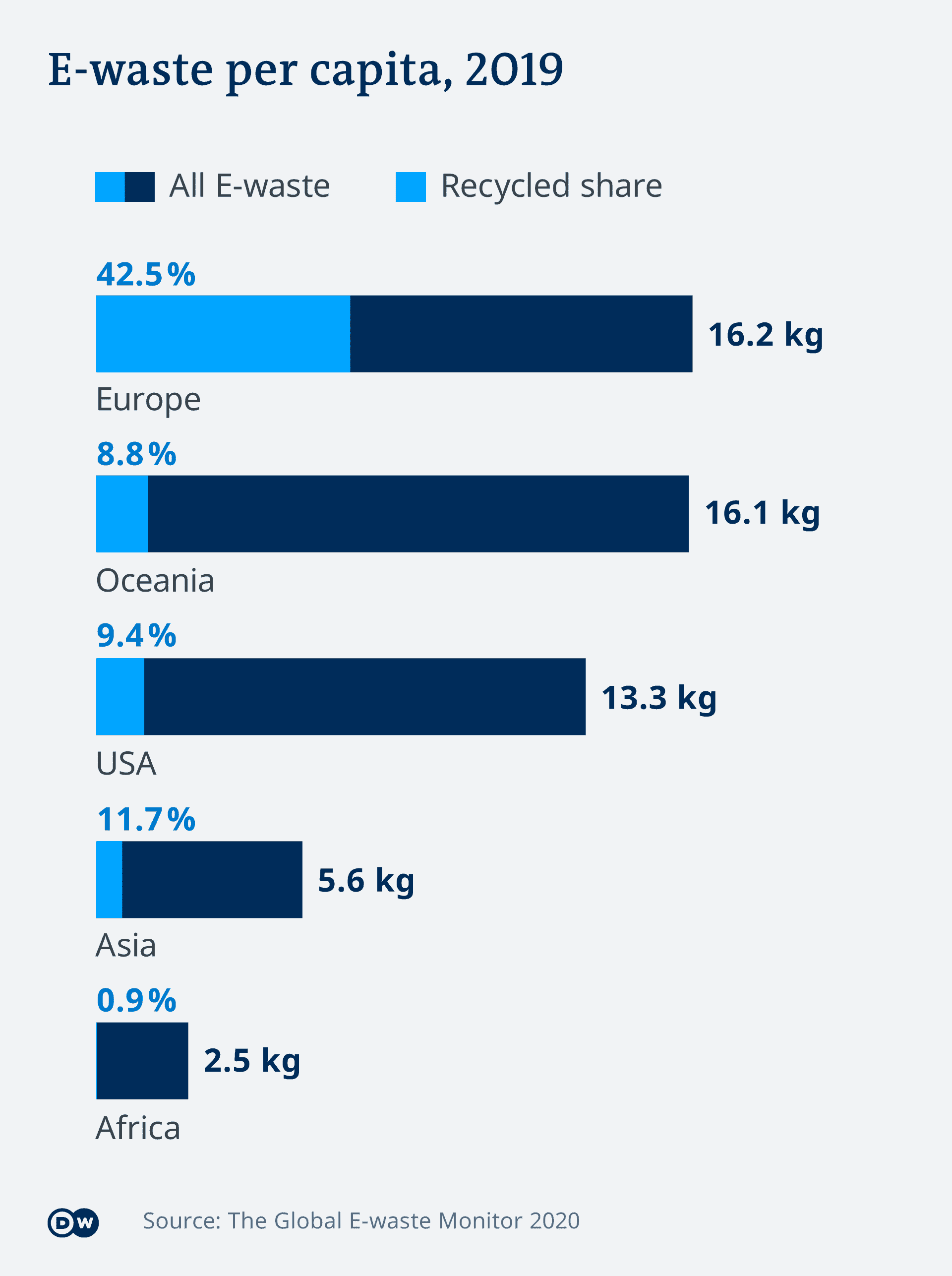 But the continent also recorded the highest documented formal e-waste collection and recycling rate at 42.5%, still below its target of 65%. Europe was well ahead of the others on this front. Asia ranked second with 11.7%.

The authors said while more that 70% of the world’s population was covered by some form of e-waste policy or laws, not much was being done toward implementation and enforcement of the regulations to encourage the take-up of a collection and recycling infrastructure due to lack of investment and political motivation.

“You have to think about new economic systems,” said Kühr.

One approach could be that consumers no longer buy the products, but only the service they offer. The device would remain the property of the maker, who would then have an interest in offering his customers the best service and the necessary equipment. The maker would also be interested in designing his products in such a way that they are easier to repair and easier to recycle, Kühr said.