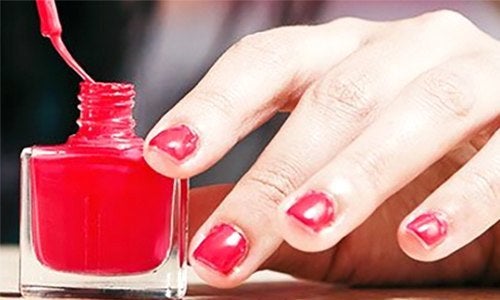 A new study co-authored by researchers at Duke University and Environmental Working Group (EWG) has detected evidence of a common nail polish chemical called triphenyl phosphate (TPHP) in the bodies of every woman who volunteered to paint her nails for the study.

TPHP is listed on the ingredient labels of a wide array of nail polishes now on the market. Photo credit: Environmental Working Group

The results represent compelling evidence that TPHP, a suspected endocrine-disrupting chemical also used in plastics manufacturing and as a fire retardant in foam furniture, enters the human body via nail polish. These results are troubling because a growing body of scientific data from other studies indicates that TPHP causes endocrine disruption, meaning that it interferes with normal hormone functioning. In animal studies, it has caused reproductive and developmental irregularities. (Some studies use the acronym TPP for this chemical).

TPHP is listed on the ingredient labels of a wide array of nail polishes now on the market. Forty-nine percent of more than 3,000 nail polishes and treatments compiled in EWG’s Skin Deep database disclose that they contain TPHP. Even worse, some polishes contain it but don’t disclose it.

The Duke-EWG study, published Oct. 19, in Environment International, tested 10 nail polishes in all for TPHP and found it in eight of them.

Importantly, two of the eight polishes that tested positive for TPHP did not disclose its presence on product labels. The Duke researchers decided not to make public the names of those two polishes or the six others that contained TPHP and disclosed it because the lab tested only 10 samples, not the manufacturers’ entire nail product lines. As well, the Duke team anticipated that some or all the manufacturers might update their product labels to disclose their TPHP use before the study could be published.

The manufacturers likely added TPHP as a plasticizer, to render their polishes more flexible and durable. The concentrations in the eight nail polishes with TPHP ranged from 0.49 percent to 1.68 percent by weight. Clear polishes generally contained more TPHP than colored polishes.

The study found that when women applied nail polish with TPHP directly to their nails, the levels of a biomarker of that chemical in their urine increased sharply. Technically, the researchers tested the women’s urine for a chemical called diphenyl phosphate or DPHP, which is created when the body metabolizes TPHP.

Most studies of TPHP involve investigations of its effects on cells and test animals. A few have associated the chemical with changes in the hormone and reproductive systems of humans. The most recent studies are striking—they suggest that TPHP interacts with a protein central to regulating the body’s metabolism and production of fat cells. Scientists are conducting more investigations to discover whether, in fact, TPHP contributes to weight gain and obesity.

Nail polish manufacturers may have turned to TPHP as a replacement plasticizer for dibutyl phthalate, or DBP, that was added to polish to improve flexibility. This chemical fell out of use in nail polish because highly publicized scientific studies showed that DBP and other phthalates are likely endocrine disruptors and toxic to the reproductive system.

Urine tests have found that Americans are extensively exposed to TPHP, probably because it is a common plasticizer and fire retardant often applied to foam cushioning in furniture. A recent biomonitoring study by Duke scientists who investigated TPHP exposure in adults found significantly higher levels of DPHP in women than in men who were tested in a separate study. These findings suggest that women may absorb more TPHP through personal care products, such as nail polish, that are marketed specifically to women.

Another biomonitoring study conducted last year by Duke and EWG researchers found DPHP, the metabolite of TPHP, in the urine of 95 percent of the adults and 100 percent of the children who participated (Butt 2014). A separate study by scientists from Duke University and the University of North Carolina found DPHP in more than 90 percent of samples collected from pregnant women (Hoffman 2014). An Australian study found DPHP in more than 95 percent of samples tested, and researchers in Asia found TPHP in 86 percent of breast milk samples from Japan, the Philippines and Vietnam (Kim 2014, Van den Eede 2015).

To investigate how TPHP from nail polish was absorbed into the body, study participants collected urine samples before and after they applied a polish that was about 1 percent TPHP by weight. When the participants wore gloves and applied polish to synthetic nails, their urinary levels of the metabolite DPHP did not change appreciably. However, when they applied the polish directly to their own nails, the levels of DPHP in their urine increased sharply.

Normally, most molecules do not permeate nails (Gupchup 1999). The researchers theorized that other polish ingredients such as solvents rendered nails more absorbent. They also suspected that the network of capillaries in the cuticle that surrounds the nail might play a role in carrying the chemical into the body.

Two to six hours after they painted their nails, 24 of the 26 volunteers in the study had slightly elevated levels of DPHP in their urine. Ten to 14 hours after polishing their nails, the DPHP levels in all 26 participants had risen by an average of nearly sevenfold, suggesting that more of the TPHP had entered their bodies and been metabolized into DPHP.

Four volunteers collected urine over 48 hours. For three of the four, their concentrations of DPHP peaked between 10 and 20 hours after painting their nails.

These results indicate that nail polish may be an important contributor to short-term TPHP exposure. For frequent users of nail polish, exposure to TPHP may be a long-term hazard.