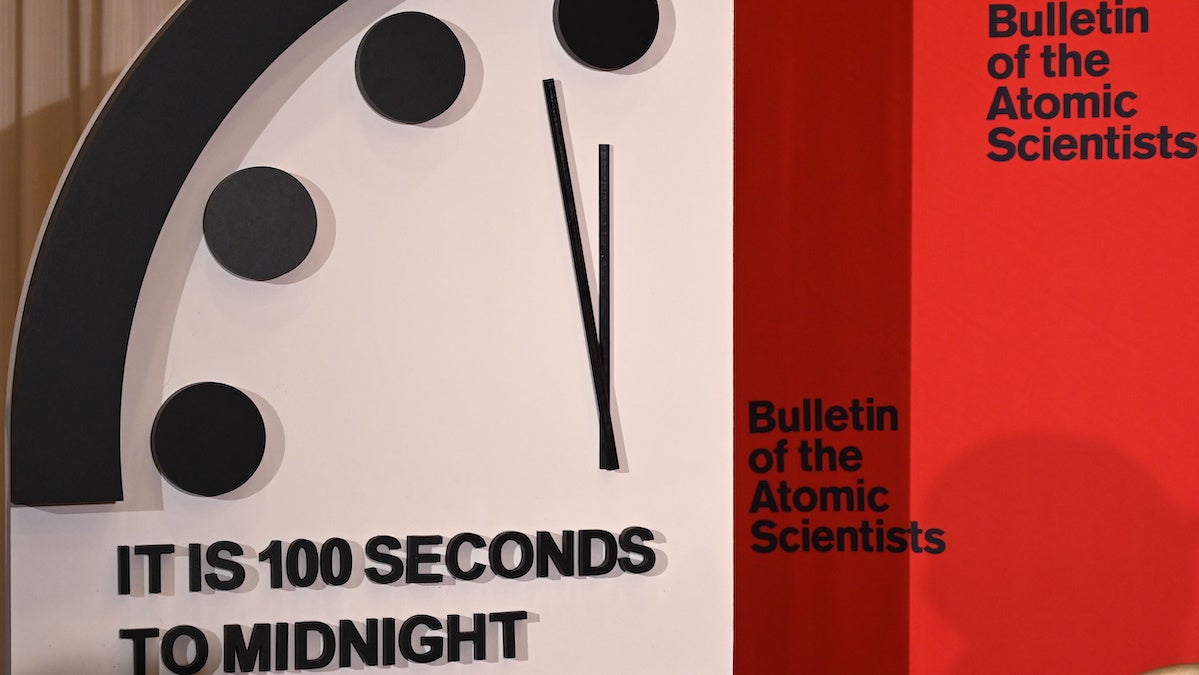 The Doomsday Clock is now at 100 seconds to midnight. EVA HAMBACH / AFP via Getty Images

The Doomsday Clock is now 100 seconds to midnight, partly because of the climate crisis.

That’s the closest the clock has moved to the apocalypse since it was first started in 1947 to warn of the dangers of nuclear war, BBC News reported.

“It is 100 seconds to midnight. We are now expressing how close the world is to catastrophe in seconds – not hours, or even minutes,” President and CEO of the Bulletin of the Atomic Scientists Rachel Bronson said in a press release announcing the time change Thursday. “It is the closest to Doomsday we have ever been in the history of the Doomsday Clock. We now face a true emergency – an absolutely unacceptable state of world affairs that has eliminated any margin for error or further delay.”

Today, the Bulletin set the #DoomsdayClock closer than ever: It is 100 seconds to midnight. Read the full Clock statement here. https://t.co/w3aOZ3voUh pic.twitter.com/sxQv92dGP0

The Bulletin of the Atomic Scientists was founded by scientists who worked on the Manhattan Project to develop the first nuclear bomb, according to NPR. It has 13 Nobel laureates on its board, which determines how close humanity is to annihilation each year, using the Doomsday Clock to raise awareness of global threats. This year, they were joined in the decision by the Elders, a group of world leaders founded by Nelson Mandela who work independently for peace and human rights, according to the press release.

“The Doomsday Clock is a globally recognized indicator of the vulnerability of our existence,” Elder and former Irish President Mary Robinson said at the annual clock-unveiling ceremony, as NPR reported. “It’s a striking metaphor for the precarious state of the world, but most frighteningly, it’s a metaphor backed by rigorous scientific scrutiny.”

The two groups made their decision to move the clock closer to the zero hour based on the two threats of nuclear war and climate change, compounded by the rise of false information online and the refusal of world leaders to act on these critical issues.

“Civilization-ending nuclear war — whether started by design, blunder, or simple miscommunication — is a genuine possibility. Climate change that could devastate the planet is undeniably happening. And for a variety of reasons that include a corrupted and manipulated media environment, democratic governments and other institutions that should be working to address these threats have failed to rise to the challenge,” the bulletin wrote in a statement explaining its decision.

On the nuclear front, the group cited several concerning foreign policy developments. These included increased tensions between the U.S. and Iran, which has continued to stockpile uranium after the U.S. pulled out of a nuclear deal. The group also mentioned the official end of the Intermediate-Range Nuclear Forces (INF) Treaty, which has led the U.S. and Russia to begin developing previously banned weapons.

When speaking of climate change, the group called out the government of the U.S. for withdrawing from the Paris agreement and the government of Brazil for weakening protections for the Amazon rainforest. But it also spoke of the general failures of world leaders to make any significant progress at either September’s UN Climate Action Summit or December’s COP25 in Madrid.

The Doomsday Clock was set to two minutes to midnight in 2018 for the first time since 1953, when both the U.S. and the Soviet Union tested hydrogen bombs. In 2019, the clock stayed at two minutes, but this year the bulletin decided to move it forward even further.

The group did say that there were things world leaders and citizens could do to move the clock backwards again. When it comes to the environment, they recommended that world leaders recommit themselves to the goals of the Paris agreement and that U.S. citizens pressure their government to acknowledge climate change and to act to address it.

“We ask world leaders to join us in 2020 as we work to pull humanity back from the brink,” Robinson said in the press release. “The Doomsday Clock now stands at 100 seconds to midnight, the most dangerous situation that humanity has ever faced. Now is the time to come together – to unite and to act.”