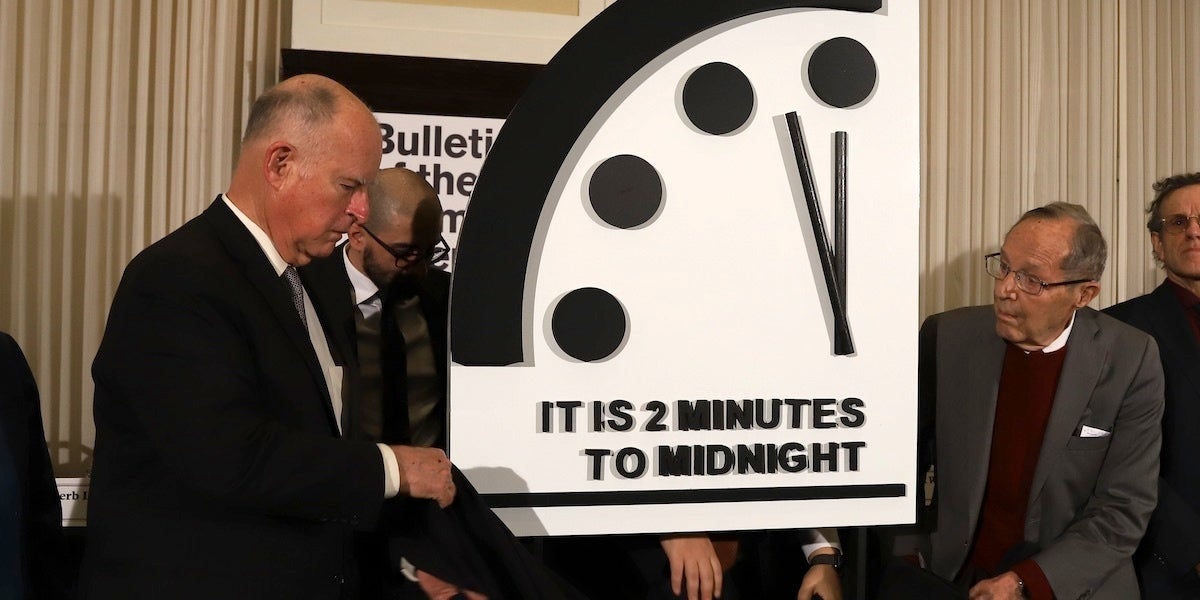 The Doomsday Clock is still set at two minutes to midnight due to a lack of progress on nuclear weapons and
climate change, as well as growing concerns of “information warfare,” the Bulletin of the Atomic Scientists announced Thursday, describing this bleak time as “the new abnormal.”

Midnight is “the symbolic point of annihilation,” the non-profit Bulletin of the Atomic Scientists said. Last year, the clock was also set two minutes to Armageddon, the closest it’s been since 1953 in the height of the Cold War.

“The ‘new abnormal’ that we describe, and that the world now inhabits, is unsustainable and extremely dangerous,” according to the 2019 Doomsday Clock statement.

Former California Gov. Jerry Brown, the executive chair of the Bulletin of the Atomic Scientists, and former Secretary of Defense William Perry, the chair of the organization’s board of sponsors, helped unveil the Doomsday Clock in Washington, DC Thursday.

“Humanity faces two dire and simultaneous existential threats: nuclear weapons and climate change. The longer world leaders and citizens thoughtlessly inhabit this abnormal reality, the more likely it is that we will experience the unthinkable,” Brown said in a press release.

Read the op-ed penned by @JerryBrownGov and @SecDef19 detailing the motivations behind the decision to keep the 2019 Doomsday Clock set at two minutes to midnight, the closest it's ever been to apocalypse. @CNN @CNN https://t.co/ngWJWT78dG

Perry added, “Brash leaders, intense diplomatic disputes, and regional instabilities combine to create an international context in which nuclear dangers are all too real.”

Since its inception in 1947, the Doomsday Clock was set at seven minutes to midnight. The minute hand ticked the farthest away in 1991 when the clock was 17 minutes to midnight, due to the end of the Cold War. But in recent years, we seem to be striking much closer to doom.

In 2017, the clock ticked forward two and a half minutes to midnight mostly because of President Donald Trump. The nuclear danger of a Trump presidency, combined with his and his administration’s climate denialism, heightened the risk of a global catastrophe, the group warned then.

The Bulletin of the Atomic Scientists included a number of recommendations on how to rewind the clock.

On the climate front, the group called on U.S. citizens to demand that their government to acknowledge and act on global warming and for President Trump to revisit his decision to withdraw the United States from the Paris climate agreement.

Countries were also urged to “act promptly and redouble efforts” to reduce greenhouse gas emissions in line with their Paris pledges.

“The world security situation can be improved, if leaders seek change and citizens demand it,” the Bulletin’s statement continues. “It is 2 minutes to midnight, but there is no reason the Doomsday Clock cannot move away from catastrophe. It has done so in the past, because wise leaders acted—under pressure from informed and engaged citizens around the world.”