Doomsday Clock Now Two and a Half Minutes to Midnight, Thanks to Trump 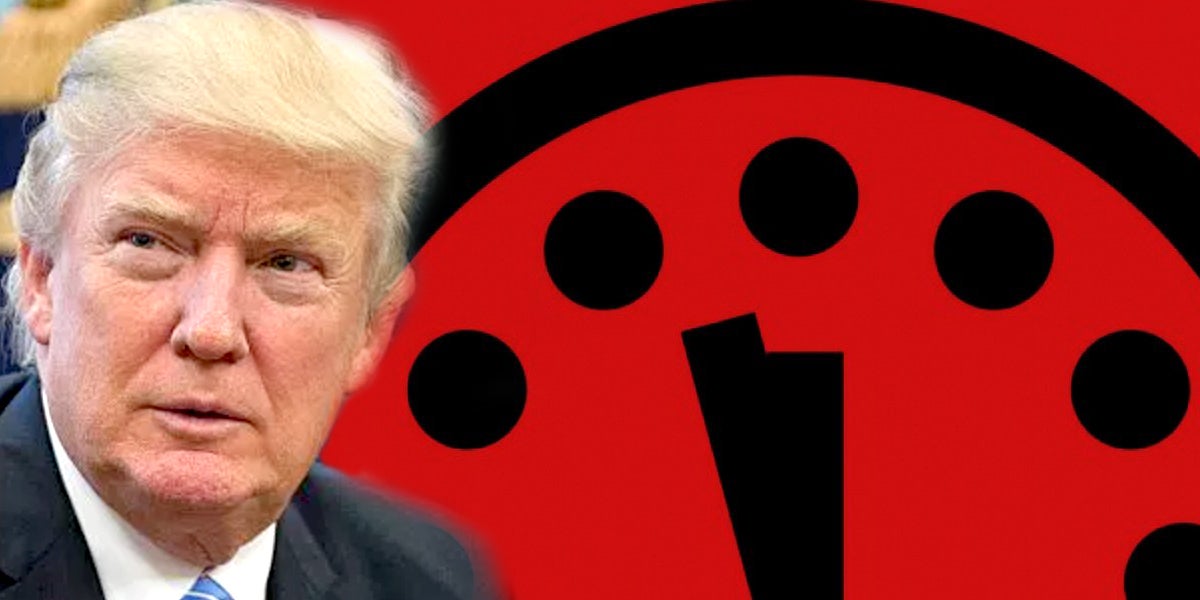 The symbolic Doomsday Clock inched closer to midnight on Thursday and we have President Donald Trump largely to thank for the ominous development.

At the National Press Club in Washington, DC on Thursday morning, the Bulletin of the Atomic Scientists’ Science and Security Board moved the hands of the iconic clock 30 seconds closer to “midnight” or the end of the world.

For the first time in the 70-year history of the clock, “the board has decided to act, in part, based on the words of a single person: Donald Trump, the new President of the United States,” according to a press statement.

The nuclear danger of a Trump presidency, combined with his and his administration’s climate denialism, heighten the risk of a global catastrophe, the group warned.

“As we marked the 70th anniversary of the Doomsday Clock, this year’s Clock deliberations felt more urgent than usual,” said Rachel Bronson, executive director and publisher of the bulletin. “In addition to the existential threats posed by nuclear weapons and climate change, new global realities emerged, as trusted sources of information came under attack, fake news was on the rise and words were used by a President-elect of the United States in cavalier and often reckless ways to address the twin threats of nuclear weapons and climate change.”

A further statement from the full board noted that the development comes even as Trump had only held office for a few days.

“Just the same, words matter and President Trump has had plenty to say over the last year,” it read. “Both his statements and his actions as President-elect have broken with historical precedent in unsettling ways. He has made ill-considered comments about expanding the U.S. nuclear arsenal. He has shown a troubling propensity to discount or outright reject expert advice related to international security, including the conclusions of intelligence experts. And his nominees to head the Energy Department and the Environmental Protection Agency dispute the basics of climate science. In short, even though he has just now taken office, the president’s intemperate statements, lack of openness to expert advice and questionable cabinet nominations have already made a bad international security situation worse.”

Last year, the board opted to hold the clock at three minutes to midnight after a two-minute leap in 2015.