The Doomsday Clock Is Now Just Two Minutes to Midnight 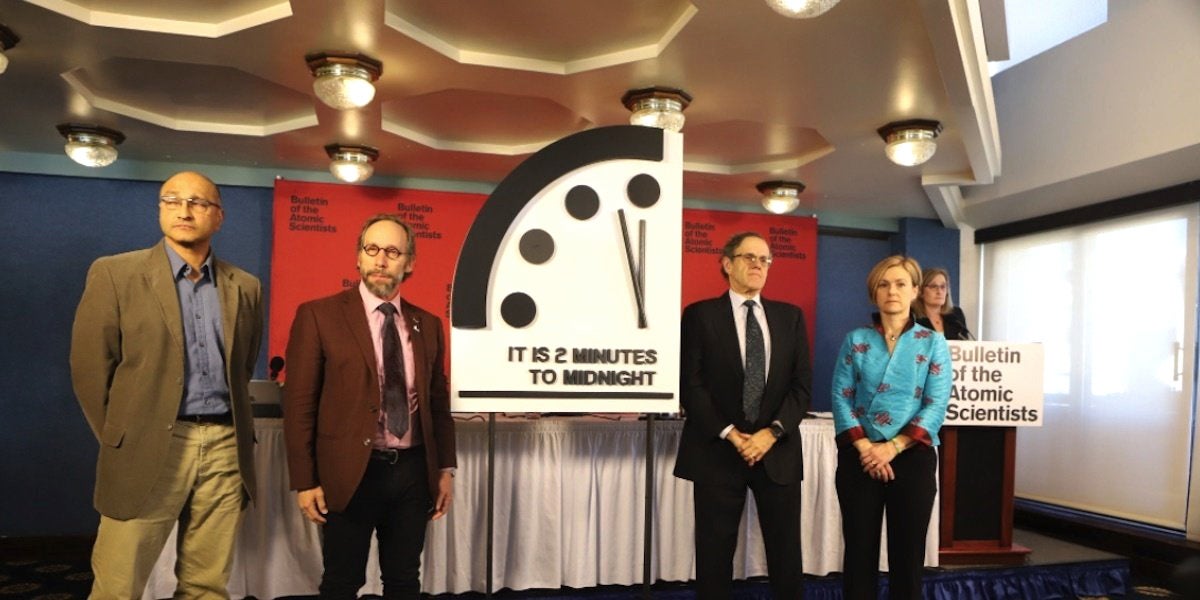 The symbolic Doomsday Clock is ever closer to midnight, or the end of the world, scientists announced Thursday at the National Press Club in Washington, DC.

The clock is now two minutes to midnight based on the predictions of the Bulletin of the Atomic Scientists, a non-profit organization that informs the public about threats to its survival due to nuclear threats, emerging technologies and climate change.

“This is the closest the Clock has ever been to Doomsday, and as close as it was in 1953, at the height of the Cold War,” the group said.

Last year, the Clock ticked forward an ominous two and a half minutes to midnight mostly thanks to President Donald Trump. The nuclear danger of a Trump presidency, combined with his and his administration’s climate denialism, heighten the risk of a global catastrophe, the group warned then.

As for this year, the Bulletin of the Atomic Scientists explained that the clock moved forward another 30 seconds because “in 2017, world leaders failed to respond effectively to the looming threats of nuclear war and climate change, making the world security situation more dangerous than it was a year ago—and as dangerous as it has been since World War II.”

“The greatest risks last year arose in the nuclear realm. North Korea’s nuclear weapons program appeared to make remarkable progress in 2017, increasing risks for itself, other countries in the region, and the United States,” the group continued. “Hyperbolic rhetoric and provocative actions on both sides have increased the possibility of nuclear war by accident or miscalculation.”

“On the climate change front, the danger may seem less immediate, but avoiding catastrophic temperature increases in the long run require urgent attention now. The nations of the world will have to significantly decrease their greenhouse gas emissions to keep climate risks manageable, and so far, the global response has fallen far short of meeting this challenge,” the Bulletin of the Atomic Scientists said.

Rachel Bronson, president of the Bulletin of the Atomic Scientists, called on immediate global action to rewind the clock.

“It is urgent that, collectively, we put in the work necessary to produce a 2019 Clock statement that rewinds the Doomsday Clock,” Bronson said. “Get engaged, get involved, and help create that future. The time is now.”