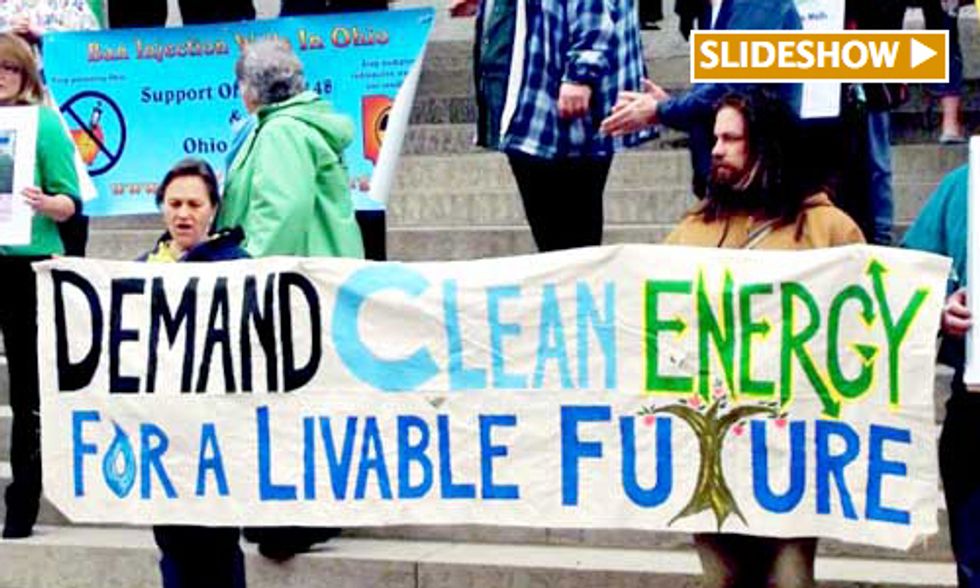 A coalition of local, statewide and national groups concerned about toxic waste from fracking, gathered yesterday at the Ohio statehouse for “Don’t Waste Ohio” Legislator Accountability Day. The coalition called for an end to Ohio being used as a regional dumping ground for oil and gas waste. Participants attending the accountability day met with their legislators in the morning and attended a rally in the afternoon advocating for the passage of legislation in both the House and Senate that would ban fracking wastewater injection wells.

In 2012, the City of Cincinnati banned facking wastewater injection wells within city limits. Following the unanimous vote on the ordinance, residents called on State Rep. Denise Driehaus (D-Cincinnati) to take action on the state level. Along with fellow co-sponsor Rep. Robert Hagan (D-Youngstown), Rep. Driehaus introduced House Bill 148, which would enact a statewide ban on the underground injection of fracking waste. Sen. Michael Skindell (D-Lakewood) followed suit by introducing the same legislation in the Senate.

“It’s like we have a sign on our backs here in Ohio for the industry saying ‘Dump your waste here,’" said Alison Auciello, an organizer with Food & Water Watch. "We don’t know what is in the waste or how radioactive it really is, and the leaders in the state legislature haven’t even allowed the legislation to be open for testimony from the public. We need to protect Ohio communities, not risk them for cheap, easy disposal of the oil and gas industry’s dirty leftovers.”

In 2013, the fracking industry disposed of nearly 700 million gallons of fracking waste in Ohio by injecting it underground into Class II wells, an increase of 100 million gallons from the previous year. More than half of the wastewater injected each year in Ohio comes from out-of-state fracking operations. Ohio is home to more than 200 active injection well sites. Pennsylvania has five active injection wells.

“What is shocking is how quickly the administration and ODNR [Ohio Department of Natural Resources] move forward to allow more and more waste injection without knowing the effects underground," said Susie Beiersdorfer, geologist and member of Frackfree Mahoning Valley. “We’ve seen problematic injection wells, sporadic inspections and earthquakes. But, the agency charged with protecting us sounds just like the oil and gas industry when they minimize or dismiss the problems.”

Under Ohio regulation, local municipalities and residents cannot appeal issued permits or decide where and whether fracking activity happens in their community. There is a short public comment period for injection well permit applications, but despite overwhelming opposition the ODNR continues to issue new permits.

“The ODNR has failed to hold public hearings concerning the proposed injection well, ignored and denied lawful information requests, and continues to act in a capricious and arbitrary manner concerning the citizen's stated objections," Kip Rondy, farmer and owner of Green Edge Gardens, told a judge after he was arrested with eight others blockading a fracking waterwater injection well site in Athens County, OH.

"It is then, when we the citizenry of Athens County, facing the real and permanent threat to our aquifer, our air, our Earth—when the will of lawfully elected officials is ignored—that the acts of civil disobedience before the court today are not merely justified, but become obligatory.”

Shalefield Stories: Personal Accounts From the Frontlines of Fracking