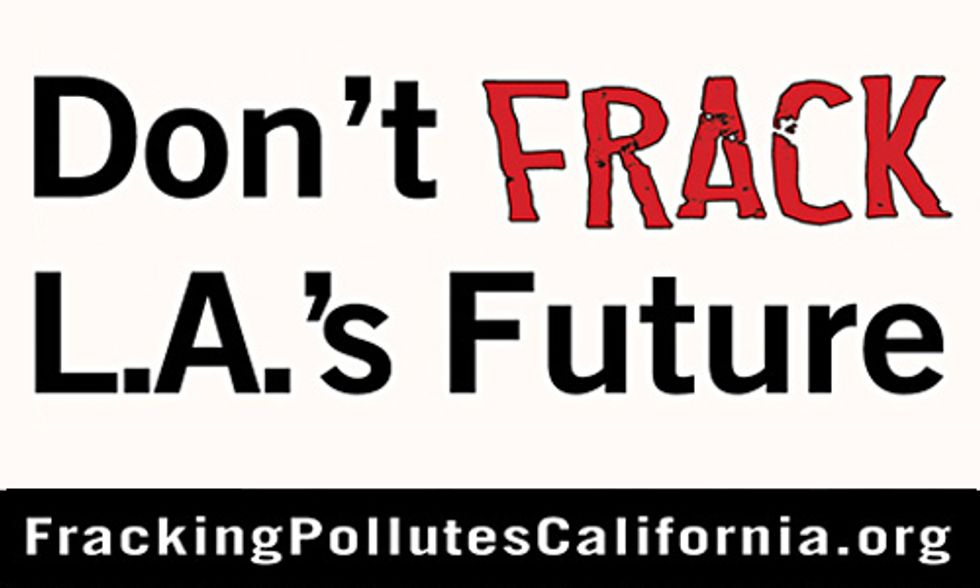 A striking new billboard on Westwood Boulevard warns Los Angeles residents that fracking, acidization and other dirty forms of oil production pollute the air and endanger the health of children and other vulnerable people. The billboard, sponsored by the Center for Biological Diversity, reads “Don’t Frack L.A.’s Future” and directs readers to FrackingPollutesCalifornia.org.

The billboard, featuring a picture of a baby in a gas mask, is located above 2346 Westwood Blvd., north of West Pico Blvd. Part of a series of billboard advertisements highlighting fracking’s threats to public health and the climate, the new ad follows revelations that toxic air pollutants have been used hundreds of times in recent months at oil and gas wells in L.A. and Orange County. The ad is part of a larger campaign to persuade Gov. Brown (D-CA) to halt fracking and L.A.-area air officials to protect public health and the environment from oil industry pollution.

“Oil companies are contaminating California’s air with formaldehyde and other toxic chemicals, and kids are especially vulnerable,” said Rose Braz, who coordinates the Center of Biological Diversity's anti-fracking campaign. “We can’t afford to frack our future. To protect our air, health and climate, we need Gov. Brown and other leaders to halt fracking and other toxic techniques.”

A coalition of health and environmental organizations last week called on the South Coast Air Quality Management District to better protect Los Angeles residents from air pollution caused by fracking and other dangerous oil and gas extraction methods. New data from the air district shows that oil companies have used thousands of tons of “air toxics” at area oil and gas wells over the past five months.

Labeled “air toxics” because they are among the most dangerous air pollutants, these chemicals can cause illness and death. A few examples:

The American Lung Association says there is irrefutable evidence of serious threats to human health from air pollutants emitted during fracking and other forms of oil and natural gas production. Infants, children and teenagers are among those most at risk.

Pollution from fracking, acidization and other forms of oil production also threatens California’s efforts to fight climate disruption. A recent study found that the methane leak rate from Los Angeles-area oil and gas operations was 17 percent. Because methane is a powerful greenhouse pollutant, leakage rates of more than three percent make even natural gas worse for the climate than coal.

“Los Angeles residents deserve full transparency from oil companies about the dangerous chemicals being spewed into the air,” Braz said. “But disclosure alone won’t protect our hearts and lungs. To shield ourselves and our future, we need Gov. Brown to put a stop to fracking, acidization and other extreme oil recovery techniques.”