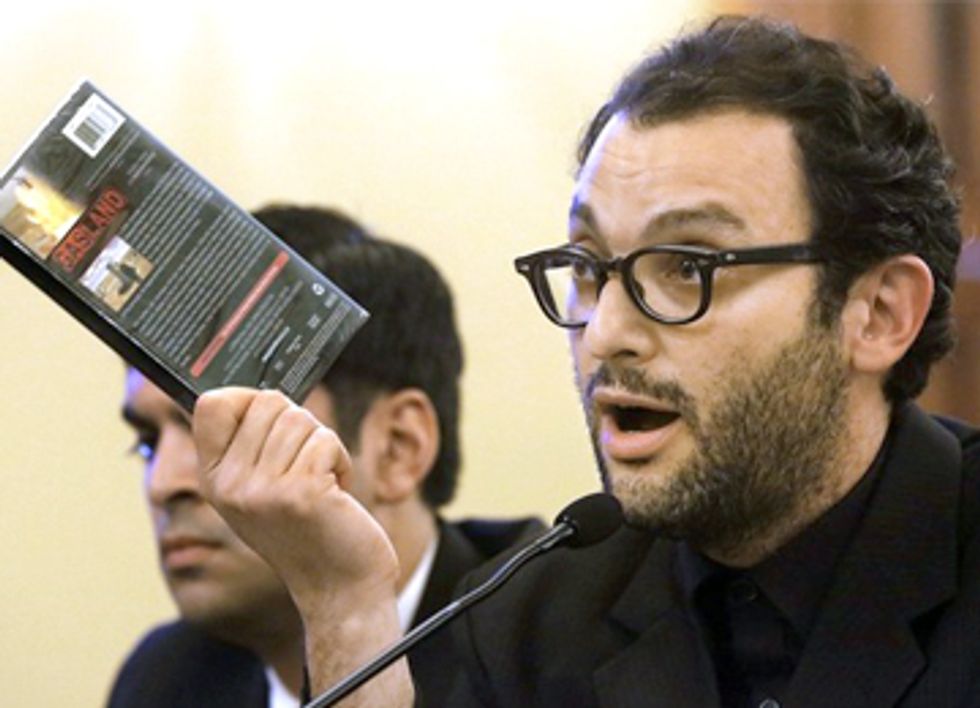 [Editor's note: This op-ed by Josh Fox is in response to an op-ed by Thomas Pyle—president of the Institute for Energy Research, a pro-industry nonprofit organization—on Real Clear Energy.]

Industry’s denial of the dark side of natural gas fracking shouldn’t fool anyone. Thomas Pyle’s claim on Real Clear Energy that there is not one “confirmed case of groundwater contamination” from fracking is the big lie, repeated often. It’s like saying cigarettes don’t cause cancer. And industry’s intentional disinformation campaign comes from the same tobacco playbook (it even uses the same PR firm).

After spending the past four years traveling the country and meeting people whose lives were wrecked by fracking operations at their doorstep, I’ve learned the oil and gas industry is willfully misleading the public. Let’s look at each of Pyle’s misrepresentations one by one:

“Hydraulic fracturing has been in use for more than 60 years without any confirmed cases of groundwater contamination.”

Fracking—when taken to mean the entire process of developing an oil or gas well—has conclusively been linked to water contamination by federal and state environmental authorities many times. In Dimock, Pennsylvania, for example, the PA Department of Environmental Protection’s (DEP) determined that methane contamination of the local water supply was due to gas drilling, specifically finding that 18 drinking-water wells in the area were affected by the operations of Cabot Oil & Gas.1

When oil industry spokespeople say "not one well" has been contaminated by fracking, it's deeply and dangerously misleading. The claim itself requires the parsing of language so that “fracking” only refers to one step in the process, namely the point when a toxic slurry of water and chemicals is pumped at enormous pressure into the ground to fracture the shale rock and free the gas within.

Industry knows it’s the drilling and well construction stages where it all breaks down—literally. As the drill penetrates deep into the earth, it punctures different gas pockets that can mix together. The well around the hole is generally sealed with cement. But this thin layer of cement—the supposed barrier to gas and chemical migration into drinking water supplies—is notorious for cracking and leaking.

Industry’s own documents show that 5 percent of oil and gas wells leak immediately and up to 60 percent of them fail over a 30-year time period. Industry estimates that about 35 percent of all oil and gas wells are leaking now. These conclusions aren’t my own: They come from drilling giant Schlumberger, Archer Oil & Gas, Southwestern Energy, Society of Petroleum Engineers, and Colorado Oil and Gas Conservation Commission, to name just a few.3

Why do so many wells leak? Pressures under the earth, temperature changes, ground movement from nearby wells and shrinkage all crack and damage the thin layer of brittle cement that seals the wells. And getting the cement right as drilling goes horizontal is extremely challenging. Meanwhile, once the cement leaks, no one can go thousands of feet under the earth to repair it.

And it is not a question of stronger cement or better technology. Industry’s own documents say that “strength is not the major issue in oil well cementing under any circumstances … cement clearly cannot resist the shear stress that is the most common reason for oil well distortion and rupture during active production.”4 In other words, the great pressure underground will cause a significant proportion of wells to fail no matter what.

Fracking has got to be seen as the sum of all parts of the operation. While the gas industry is busy playing semantics, people’s health, lives and property is being compromised.

“[W]hen water from a kitchen faucet is set ablaze … the stunt is completely unrelated to drilling; rather it’s the result of naturally occurring methane.”

The flaming faucets documented in Gasland I and II are the product of natural gas migration into water supplies due to fracking right next door. Numerous investigations have confirmed this fact, including studies by the U.S. Environmental Protection Agency, the Pennsylvania Department of Environmental Protection, and many others.5 When industry says no, that’s not true, it’s telling you to believe in some giant conspiracy theory—that families all across the country are lying in reporting that their wells never flamed before fracking.

Piling on the evidence, Duke University recently conducted a peer-reviewed study that links water contamination with nearby drilling and fracking, concluding that water wells near drilling and fracking operations were 17 times more likely to contain elevated levels of methane.6 Seventeen times!

The Pennsylvania Department of Energy issued a consent order specifically concluding that 18 drinking-water wells in the area were affected by the drilling and fracking operations of Cabot Oil & Gas.7

“Even the Environmental Protection Agency’s groundwater studies cited by Fox were so deeply flawed that then-EPA administrator Lisa Jackson publicly disputed them.”

Here’s what Lisa Jackson really said, as captured in an on-camera interview with her for Gasland II: “We do have cases where we believe we see many cases of groundwater contamination and drinking water contamination that are, if not brought on entirely by natural gas production, were exacerbated by it. Not just methane, which is natural gas, but other contaminants as well.”

First, we don’t use gas to power cars—save a few niche city bus fleets—nor oil to generate electricity, so the “energy independence” hype is truly misleading. Much of the gas fracked in the U.S. will end up overseas. Currently gas in Europe costs about 3 times more per unit than it does in the U.S. Prices in Asia are even higher. These realities are leading to an explosion of permitting requests for the construction of Liquefied Natural Gas terminals on our coasts for the purpose of transporting gas overseas.

What’s more American prosperity will be gutted anyway if we continue to flood the atmosphere with heat-trapping gases like carbon dioxide and methane. Some say gas is a bridge to get us over the climate hump because it’s cleaner than coal. But this ignores the leakage of methane—a heat-trapping gas up to 105 times as potent as carbon dioxide over 20 years. Experts have said anything more than a 2 percent leakage rate of methane means any climate benefits of gas over coal are voided.8 Results now coming in from the field show leakage rates between 7 and 17 percent9—making natural gas from fracking way worse than coal as far as climate is concerned.

The explosion of fracking across the American landscape is being painted by industry as a blessing to us all. But for the families I’ve met with, it’s the worst kind of curse. Lives upended, forced to move, health hanging in the balance—these are the “blessings” families I now know well are experiencing. Don’t believe the hype. See the film and judge for yourself.

Up until now, humans have had an invaluable ally in the climate crisis battle: Earth's plants.

Fridays for Future, the youth-led global group inspired by Swedish campaigner Greta Thunberg, announced Wednesday that its next international day of climate strikes will occur on March 19 of this year with a demand for "immediate, concrete, and ambitious action" directed at world leaders who have in recent years talked seriously about the urgent need to address the planetary emergency but stalled dangerously by failing to make those words a reality.

United Airlines is seeking to reduce its net greenhouse gas pollution by investing in carbon capture and sequestration instead of merely buying carbon offsets.