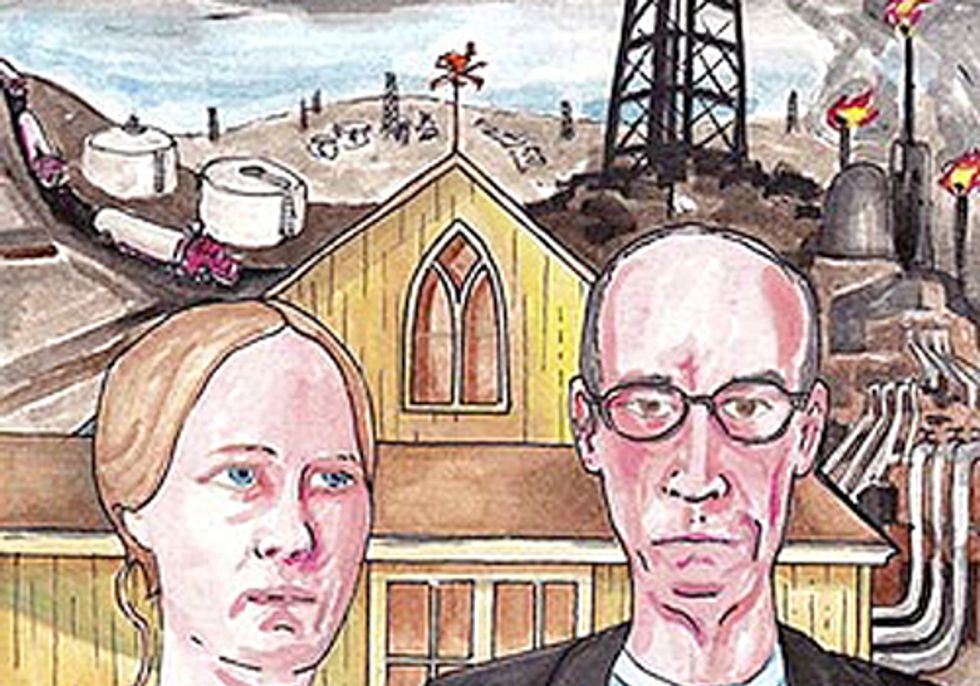 A major storm is brewing over the U.S. Department of Agriculture's (USDA) sudden about-face on fracking and environmental laws. On March 20, the head of the USDA pulled a 180-degree U-turn and decided to reverse the call made by his staff specialists, who advised that the agency immediately stop giving special exemptions from environmental laws to people applying for federal mortgages on properties with oil and gas leases.

Now, environmentalists, members of Congress, and transparency groups are saying that something seems amiss and they are looking for answers.

It all started on March 19 when The New York Times ran a story with emails showing that the USDA planned to tell its $165 billion dollar mortgage program to stop financing properties with drilling leases until an environmental review of the impact of drilling and fracking on homes backed by the agency could be completed.

“The proposal by the Agriculture Department, which has signaled its intention in e-mails to Congress and landowners, reflects a growing concern that lending to owners of properties with drilling leases might violate the National Environmental Policy Act, known as NEPA, which requires environmental reviews before federal money is spent. Because that law covers all federal agencies, the department’s move raises questions about litigation risks for other agencies, legal experts said,” the story explained.

DeSmogBlog has obtained many of the emails and they make very clear that the staff specialists, whose job it is to interpret laws like NEPA, believe that environmental reviews are legally required and that the agency is vulnerable to litigation if it gives these mortgages a pass, called a “categorical exclusion.”

The emails come from staff specialists in the agency’s New York office as well as from headquarters.

One from a Congressional liaison, sent to members of Congress on March 8, said:

“The level of NEPA review known as a Categorical Exclusion (CE) streamlines the NEPA process for those actions that are so routine and harmless in nature that no further documentation or analysis is required.”

But fracking is hardly “routine” or “harmless," the liaison added in the email quoted by The New York Times.

“There is substantial controversy over the extent, range and issues associated with hydraulic fracturing (fracking) for gas in the Northeast region of the U.S.,” the liaison wrote. “Approval of such leases would allow for a number of potential impacts to possibly occur which would need to be analyzed in a NEPA document that would be reviewed by the public for sufficiency.”

Why should anyone care about this?

First of all, the situation speaks to a larger trend. The specialists on the front lines came to one conclusion about what the science and law requires. The political appointees at upper ranks decided that such policy does not fit with the current agenda to promote drilling, so they went the opposite way.

But the review being called for by USDA staff also makes common sense. NEPA, sometimes called the magna carta of environmental laws because it is so fundamental and powerful, requires government agencies to understand the environmental impacts of decisions before taking action.

If a full environmental review under NEPA is done, the government would not only need to study the full range of fracking’s environmental impacts, but the public can weigh in on the adequacy of the review. If corners are cut, citizens can sue. And that’s exactly what so scares the Obama administration.

The pressure on the USDA to reverse the recommendation of its legal experts began almost immediately after the NY Times report.

“Not only would an environmental review harm the individuals that need the loans the most, it would also be detrimental to our nation’s progress towards energy independence,” he wrote. “If we make potential home owners choose between getting a home loan to keep their house or maintaining a mineral lease, viable sources of oil and gas may become less accessible.”

Rep. Boren, who has leased his own land for hundreds of thousands of dollars and happens to be the son of Continental Resources board member David Boren, kept the pressure high.

“Our economy is in jeopardy and now is not the time to spend when it is unnecessary,” he wrote, referring to the cost of conducting the environmental reviews that NEPA requires.

Indeed, Sec. Vilsack’s office has attempted to disavow the clear counsel from his frontline offices and experts.

“The information provided to Congressional offices on March 8, 2012 was premature and does not reflect past, current or future practices of the department,” Mr. Vilsack announced yesterday, adding that he would immediately authorize an Administrative Notice “reaffirming” that rural housing loans are exempt from full NEPA reviews.

On March 20, Rep. Edward J. Markey (D-MA), Ranking Member of the Committee on Natural Resources, sent a letter [PDF] to the Council on Environmental Quality (CEQ), the part of the White House that is responsible for overseeing NEPA, requesting  information about how the administration plans to handle fracking and mortgages.

Many agencies, not just the USDA, issue or back mortgages, Rep. Markey explained, so he formally requested a full environmental review to protect taxpayers not only from being sued for failing to follow NEPA, but also from being liable for environmental damage from drilling on mortgaged lands.

Rep. Maurice Hinchey (D-NY) called on the USDA to pay close attention to the views of their experts. “There are many cases where these operations have contaminated water supplies and significantly downgraded air quality,” Rep. Hinchey said. “It is critically important that the appropriate federal agencies, including USDA, do everything they can to prevent these things from happening again.”

The Center for Biological Diversity (CBD), an environmental group known for conducting aggressive litigation, said in interviews that it was considering filing lawsuits.

Public Employees for Environmental Responsibility (PEER), which specializes in whistleblower and open-records litigation, is hitting USDA with a broad Freedom of Information Act (FOIA) request.

PEER is asking USDA to release a series of documents that may shed light on pressure that the White House may have put on the USDA to reverse the view of agency staff and instead continue granting categorical exclusions. It also seeks documents between elected officials and the agency about their decisions.

Wenonah Hauter, the executive director of Food and Water Watch, described the reversal by USDA as “the antithesis of good public policy”.

“Throughout the rancorous debate on fracking, the Obama administration has signaled it will put the interests of the oil and gas industry ahead of the welfare of rural communities and U.S. taxpayers,” she said.

“It is embarrassing for Secretary Vilsack, who has been an outspoken advocate for renewable energy and for preserving the quality of life in rural America, to now do the Obama administration’s bidding and prevent environmental reviews that could protect the water and air resources of rural communities.”