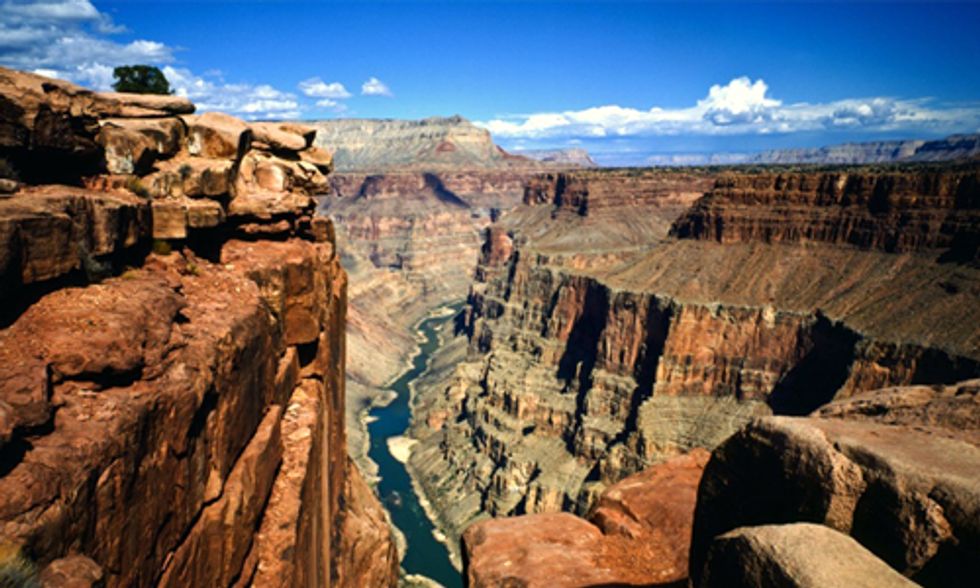 Do Charles and David Koch want to mine the Grand Canyon for uranium?

The proposal, in so many words, deems the area around the Grand Canyon a national monument. The bill is supported by 80 percent of Arizonans as well as a number of environmental organizations and native tribes.

However, pro-mining Arizona Chamber of Commerce and the Koch-linked Prosper Foundation have co-authored a report calling the efforts a "monumental mistake" and that monument designation for the Grand Canyon "will only hurt—not help—Arizona."

As it appears, the Prosper Foundation receives nearly its entire budget with funds from the Koch-backed American Encore, according to 990 tax forms seen by Greg Zimmerman, the policy director at the Center for Western Priorities.

As Zimmerman explained on ThinkProgress:

Prosper, which was formed in 2013, covers nearly its entire budget with funds from Koch-backed American Encore—formerly known as the Center to Protect Patient Rights. According to tax filings, American Encore has funded 83 percent of Prosper Inc.’s total budget since its creation, donating over $1.5 million to the organization in 2013 and 2014.

Despite vast public support for permanent protection of the area, Zimmerman pointed out that "most of Arizona’s congressional delegation—including Senators John McCain and Jeff Flake, and Representatives Paul Gosar, David Schweikert, Trent Franks and Matt Salmon—want the gateway to the Grand Canyon open to uranium mining."

The state of Arizona has mined for uranium—the raw material needed to make nuclear power—since the early 1900s. Though it has created an industry for the state, the process "has caused cancer in miners who breathed it or the many Native Americans who drank it after their water became contaminated by it," Arizona's 12 News noted.

Still, Republican lawmakers have long been opposed to conservationists' efforts to protect the Grand Canyon from the uranium mining. McCain and Gossar proposed legislation Oct. 12, 2011 to open 1 million acres of public lands that form Grand Canyon National Park’s watershed to new uranium mining. The bill would have overturned an existing moratorium on new mining and mining claims and block Interior Sec. Ken Salazar’s proposal to extend those protections for the next 20 years.

Grijalva's act would pave the way for President Barack Obama to declare a national monument in his last year in office.

"One of the complaints you hear from members, particularly on the Republican side, is the president shouldn't use his executive authority, that this is something we should do as law," Grijalva told The Arizona Republic. "Well, you've got a law in front of you. ... At some point, if the lack of response by the Republicans ... continues, then obviously the appeal is to the president to consider this legislation for a presidential designation of a monument."

Zimmerman has also expressed frustration at the GOP over the obstruction. “The thing that’s so fascinating to me is that the polls show [the monument] is overwhelmingly popular across Arizona, and yet the political establishment in the state is so diabolically opposed to it," he told The Phoenix New Times.

“There is a tight-knit community among right-wing Republican leaders who are strongly opposed to public-land protection,” Zimmerman said, adding “what these guys do to move money is incredibly sophisticated.”