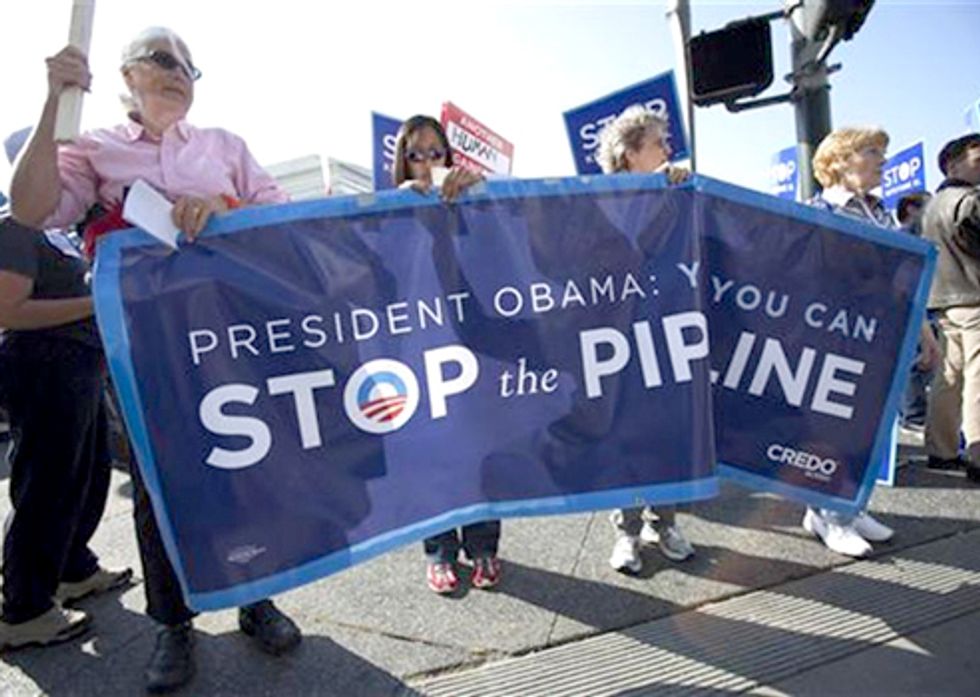 Just in case you thought there was anything subtle about the Keystone battle, you need to hear what Jack Gerard, president of the American Petroleum Institute—the oil industry's #1 front group—said Jan. 5. If the president doesn’t approve the project there will be "huge political consequences.”

That’s as direct a threat as you’re ever going to hear in Washington D.C., and it shows just how mad you made the oil industry last year by exposing Keystone for the climate-killing danger it is. And the oil industry can obviously make good on their threats—they’ve got all the money on Earth, and thanks to Citizens United they can use it without restriction in our elections. They’re not used to ever losing.

So far the Obama administration is standing firm in the face of Big Oil's bullying—the White House made it completely clear last month that if the oil industry and its harem in Congress forced a speeded-up review, it would lead to an outright rejection of the permit for the pipeline. We expect they’ll keep their word.

Here's what I think we need to do.

1. Let the president know you’ve got his back when he rejects the pipeline. Tell him that addressing climate change is the key to our future, and that you’re glad he’s not bending.

2. Take the offensive against the oil industry. If they’re going to try and ram Keystone down our throats, we’re going to try and take away something they hold dear, the handouts that Congress gives them each and every year. They’re the richest industry on earth, they’re doing great damage to the planet—and they expect us to pay for it with our tax dollars.

Can you send a quick note to President Obama covering those two key points?

To send a message to President Obama, click here.

Thank you for opposing the rushed Keystone XL pipeline permit. Responding to climate change is critical to preserving our collective future, and I hope this is a first step towards the dramatic changes we need to avoid catastrophe. P.S.—Please take handouts for the fossil fuel industry out of next year’s budget. There are people in America who need that money more.

There’s lots more to be done, of course. In the slightly longer run, we’ve got to take on the greatest subsidy of all—the special privilege that Congress gives the fossil fuel industry to use the atmosphere as an open sewer into which to dump its carbon for free.

But today—right now, in the face of this kind of straight-up bullying—it’s time to punch back. We’re nonviolent, but we’re not wimps.