Did Your State Make the Top 10 List for Its Commitment to Local Food? 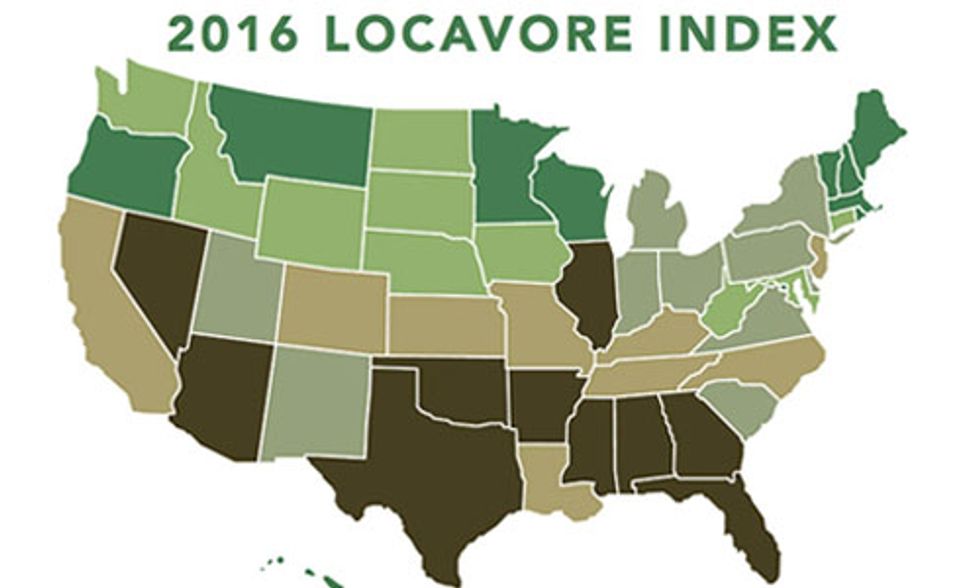 By Strolling of the Heifers

Vermont once again tops all the other states in terms of their commitment to local food, according to the 2016 Locavore Index.

The index ranks the 50 states, plus Puerto Rico and the District of Columbia, using a variety of indicators related to local food production and consumption. It has been produced annually for five years by Strolling of the Heifers, a non-profit food advocacy organization based in Vermont.

“The index has stimulated a lot of discussion and a lot of action in many states to improve their ranking," said Orly Munzing, founder and executive director of Strolling of the Heifers.

“We're proud that Vermont is still number one, but it is great to see so many other states following Vermont's lead in building strong local food systems. The purpose of the index is to stimulate efforts across the country to use more local food in homes, restaurants, schools and institutions."

After Vermont, the next four spots in the index are occupied by Maine, Oregon, Montana and New Hampshire, in that order. Montana is a newcomer to the top five, moving up from seventh place on the strength of strong investment of U.S. Department of Agriculture (UDSA) Know-Your-Farmer grant funding.

Rounding out the top 10 are Hawaii, Massachusetts, Wisconsin, Rhode Island and DC.

“While it's exciting that Vermont remains number one in the nation for local food production and consumption, it is also exciting to witness the great strides other states are realizing in reaching these goals," said Chuck Ross, secretary of the Vermont Agency of Agriculture, Food and Markets.

“As we all know, farmers are very effective educators and often best positioned to promote agricultural literacy in our communities. The future of a successful agricultural economy in which farmers and producers can prosper and consumers have access to safe, affordable, healthy food depends upon an agriculturally literate and engaged public. The Locavore Index helps us track our progress and work towards that success."

This year's index incorporates new data from the USDA on its Know Your Farmer—Know your Food grants. These were calculated on a per-capita basis for each state. Vermont, the top-ranked state, received $21.43 per person in such grants, more than twice the amount for North Dakota ($10.10), which came in second in this category.

The index continues to include data from the USDA's Census of Agriculture, including data on the dollar volume of direct-to-the-public food sales by farmers, including sales at farmers markets, CSAs, farm stands and online sales. But since this census data has not been updated since 2012, its weight within the index has been reduced.

Puerto Rico is included in the index for the first time this year. Even though its local-food movement is still fledgling (it has only one CSA), it came in 41st, ahead of New Jersey and Georgia, on the strength of a strong farm-to-school program in its schools.

Martin Langeveld, who researches and compiles the index for Strolling of the Heifers, commenting on the evolution of the index, said, “It's interesting to see that each year, there is a greater variety of metrics available around local food and developing more of them is important. Many states and the federal government have programs to build the consumption of local foods, but to assess the effect of those efforts, we need more and better metrics."

Strolling of the Heifers lists 10 reasons for people to increase their use of local foods, stressing that local foods are more sustainable, healthier, better for the environment and economically positive than foods sourced from large-scale, globalized food systems.

4. Less waste: Because of the shorter distribution chains for local foods, less food is wasted in distribution, warehousing and merchandising.

5. More freshness: Local food is fresher, healthier and tastes better, because it spends less time in transit from farm to plate and therefore loses fewer nutrients and incurs less spoilage.

6. New and better flavors in each season: When you commit to buy more local food, you'll discover interesting new foods, tasty new ways to prepare food and a new appreciation of the pleasure of each season's foods.

7. Good for the gene pool and the soil: Local food encourages diversification of local agriculture which preserves genetic diversity and reduces the reliance on monoculture—single crops grown over a wide area to the detriment of soils.

10. Builds more connected communities: Local foods create more vibrant communities by connecting people with the farmers and food producers who bring them healthy local foods. As customers of CSAs and farmers markets have discovered, they are great places to meet and connect with friends as well as farmers.

Milk Alternatives That Will Make You Want to Ditch Dairy