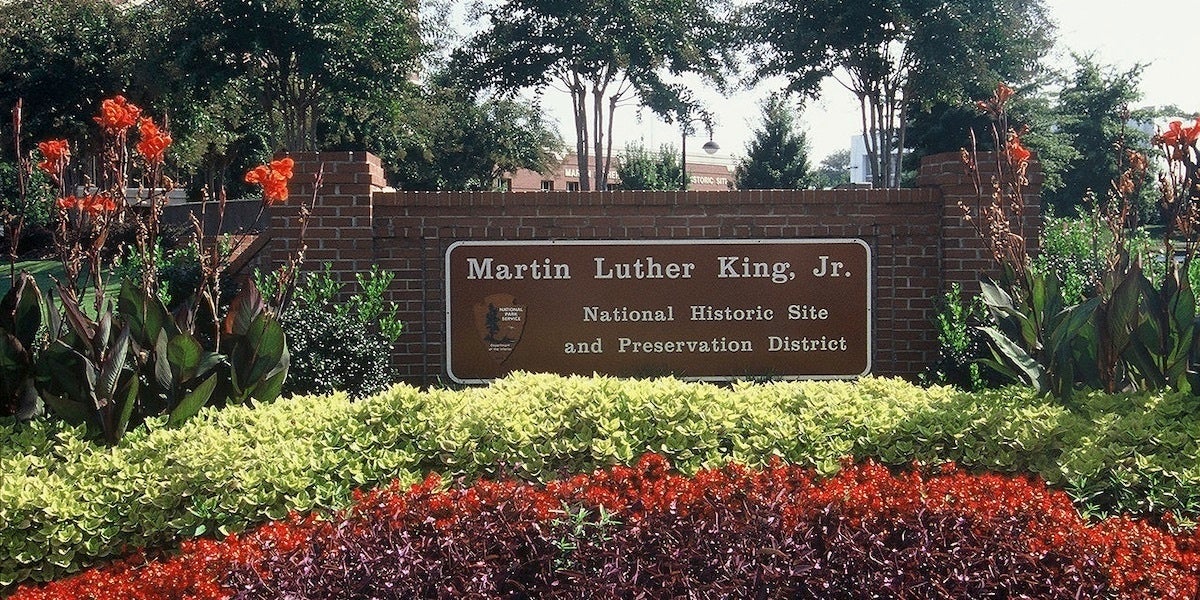 Hats off to Delta Air Lines. The company’s charitable arm awarded the National Park Service an $83,500 grant to help reopen the
Martin Luther King Jr. National Historical Park in Atlanta from Jan. 19 through Feb. 3 in honor of Dr. King’s legacy.

The Atlanta-based airline was inspired to act after learning that some of the park’s sites, including Dr. King’s birth home, Ebenezer Baptist Church, Fire Station No. 6 and the visitor center, were closed due to the
partial government shutdown, now on its 28th day, according to LinkedIn post from Delta Air Lines CEO Ed Bastian.

“These historic landmarks represent the strength of our community and should always be made available for the public to enjoy,” Bastian wrote in the post.

Martin Luther King Jr. Day is always observed on the third Monday of January each year. This year’s occasion is particularly special as the civil rights icon would have turned 90 on Jan. 15.

The Delta Air Lines Foundation is honored to give the @natlparkservice a grant to reopen the Martin Luther King, Jr. National Historical Park on its most important weekend of the year.

Bastian also said he wants the landmarks to be open for travelers who will be in town for the Super Bowl on Feb. 3.

“For everyone visiting Atlanta for the big game, I highly recommend touring these inspiring sites,” he wrote.

The grant from the Delta Air Lines Foundation will go towards clean up, administration, maintenance and operating costs of employees not covered under recreation fee funds, according to a National Park Service
press release.

“It is not possible to overstate our appreciation to The Delta Air Lines Foundation for ensuring the Martin Luther King, Jr. sites are accessible to the American people as we honor Dr. King on the 90th anniversary of his birth,” said
David L. Bernhardt, acting secretary of the Department of Interior, in the press release. “This is yet another example of private organizations stepping up to ensure that our visitors from across the nation and around the world are able to have a meaningful experience at national parks.”

The National Park Service has contributed funds from fees paid by park visitors for entrance, camping, parking and other services. The Interior “has determined that these funds can and should be used to provide immediate maintenance assistance and services to parks during the lapse of appropriations,” the press release said.

The environment is a civil rights issue. We can’t talk about fighting for clean air, water and land without mentioning how people of color, low-income populations and other marginalized communities are disproportionately exposed to pollution and the harmful impacts of climate change.

The National Association for the Advancement of Colored People (NAAP)
wrote last year before the launch of its Solar Equity Initiative:

Multiple NAACP studies and reports chronicle the disparities in exposure to pollution from fossil fuel based energy production in low income and communities of color. Communities of color and low income communities, as well as population groups such as women, consume the least energy, but are most disproportionately impacted, suffering poor health outcomes, compromised education, loss of livelihoods and loss of life as a result of exposure to toxins and the ravages of climate change.

The ongoing government shutdown has caused disruption in air travel and could expose passengers to potential security vulnerabilities from air traffic controllers and TSA workers going without pay and calling in sick.

Bastian, Delta’s CEO, said this week that the shutdown will cost the company $25 million in revenue in January alone because fewer government contractors and employees are traveling.

“We are seeing some pressure on our business,” he said, according to
The Atlanta Journal-Constitution. “We strongly encourage our elected officials to do their very best to resolve their differences and get the government fully open as soon as possible.”

“The time is always right to do what is right.”

These powerful words spoken by Dr. Martin Luther King, Jr. resonate stronger than ever as we celebrate his life and legacy this weekend. While his work in bringing people together can be felt worldwide, his influence is a constant presence in Delta’s hometown of Atlanta. Upon learning that the #governmentshutdown meant Dr. King’s birth home, Ebenezer Baptist Church, Fire Station No. 6 and the visitor center would be closed during the national holiday, we knew we had to take action. These historic landmarks represent the strength of our community and should always be made available for the public to enjoy. I’m honored and humbled that Delta Air Lines will continue supporting Dr. King’s legacy by funding the Martin Luther King, Jr. National Historical Park, allowing these sites to be open January 19 through February 3. For everyone visiting Atlanta for the big game, I highly recommend touring these inspiring sites.