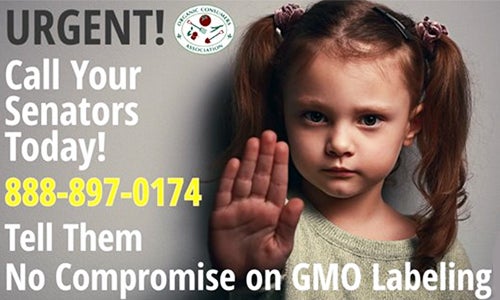 Last night, Sen. Pat Roberts (R-KS) filed a new version of the anti-GMO labeling bill widely known as the DARK Act, which would prevent states from requiring labeling of genetically engineered (GMO) foods and stop pending state laws that require labeling from going into effect. We urge the Senate to reject this bill that favors the interests of corporations over those of the people.

The majority of Americans, more than 90 percent in many polls, favor GMO labeling. The long-term effects of GMOs are not known, so it only makes sense that consumers should have the option to avoid them if they so choose. Instead, the DARK Act would strip away the power of the states to protect the public’s right to know what is in their food.

The Senate could vote this week on S. 2609, the Senate version of the DARK Act! https://t.co/Wrw6autAaF #RightToKnow pic.twitter.com/SJAlWeILaP

Sen. Roberts’ bill will not provide consumers with information they need to make informed choices at the grocery store. Instead it sets up a complicated and unrealistic process for allowing companies to use voluntary labeling, QR codes, (800) numbers or social media to avoid putting simple information about GMO ingredients on food packages.

We call on Congress to create a mandatory on-package GMO labeling requirement so people can decide for themselves whether they want to eat a food that has been produced using genetic engineering. We urge all Senators to oppose Sen. Roberts’ bill.