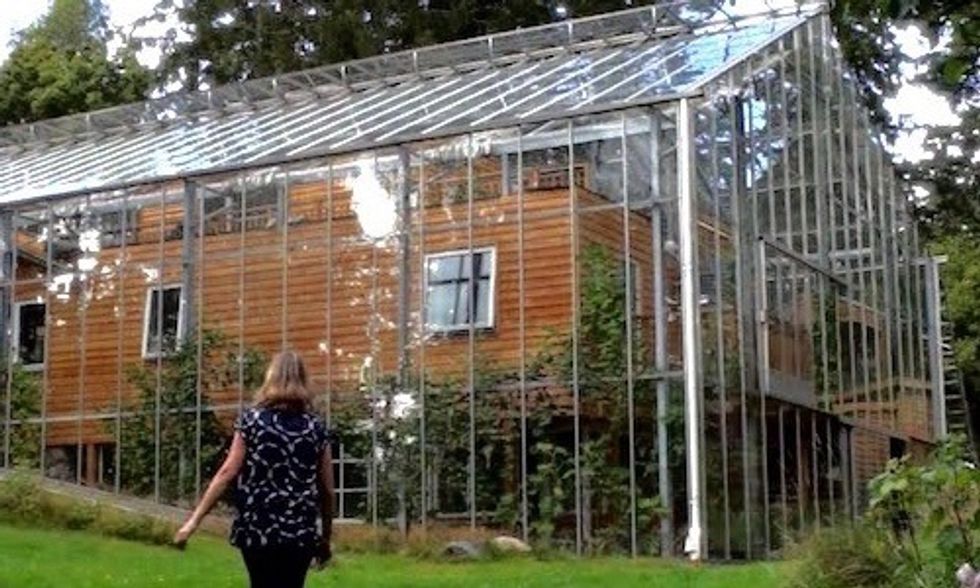 With average January temperatures hovering around 27 degrees Fahrenheit, Stockholm, Sweden isn't very pleasant to live in when you don't have heating.

But for Marie Granmar, Charles Sacilotto and their young son, their environmentally friendly house-within-a-greenhouse is a true winter escape.

The couple recently gave Fair Companies a tour of their "Naturhus" (or Nature House) that's surrounded by a 4-millimeter pane of glass that cost roughly $84,000 to install.

The Naturhus was built on the site of an old summer house on a Stockholm archipelago and was inspired by Swedish eco-architect Bengt Warne, who was also Sacilotto's mentor.

There are many advantages of living in a greenhouse for this family. Sunlight helps warm the home during the day and residual heat is stored in the bedrock below the house. The roof deck can be used for year-round activities such as sunbathing, reading or playing with their son.

The environmentally conscious family is incredibly self-sufficient. They collect rainwater for household needs as well as for watering their plants. Kitchen and garden waste is composted.

Sacilotto, who is an engineer, even built the house's sewage system. According to Fair Companies, "the sewage system begins with a urine-separating toilet and uses centrifuges, cisterns, grow beds and garden ponds to filter the water and compost the remains."

And yes, because it's a greenhouse, they also grow their own food such as tomatoes, cucumbers, figs, grapes and herbs that wouldn't normally survive during the Scandinavian winter.

You might be wondering: Is it safe to live inside a glass greenhouse?

"It's security glass," Sacilotto told Fair Companies. "So in principal this can’t break. If it ever does, it will break in tiny pieces to not harm anyone."

Take a tour of the Naturhus in the video below.