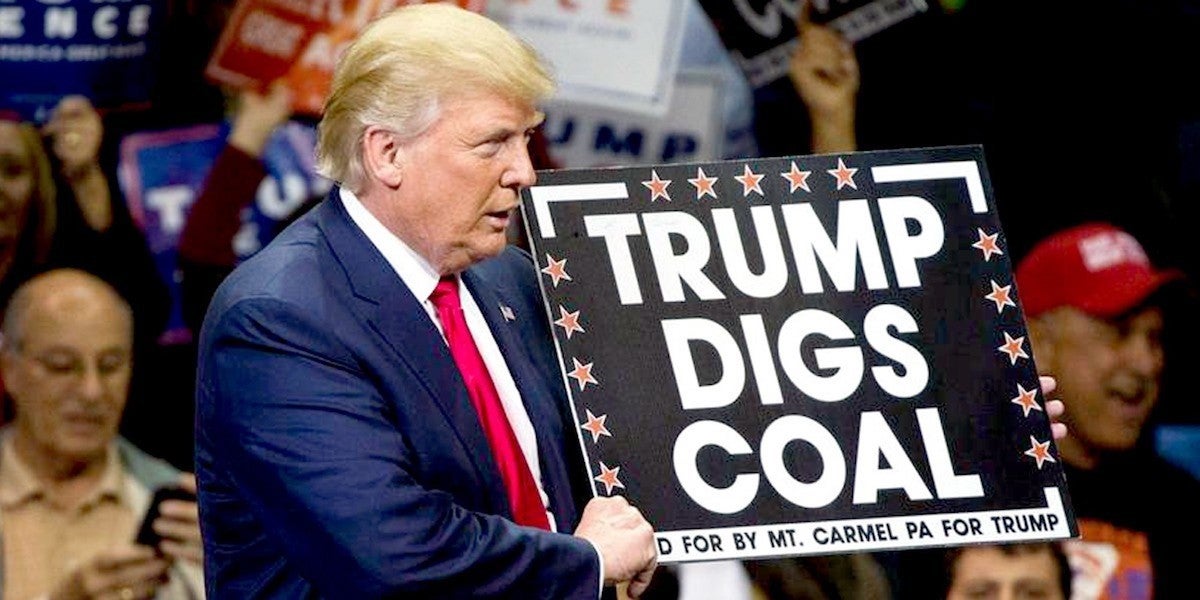 Is this what Donald Trump meant when he campaigned on being the “greatest jobs president that God ever created”?

The president celebrated the 70 whole jobs created by the Acosta mine in Somerset County, Pennsylvania, the nation’s newest coal mine.

“When I ended the ‘war on coal,’ I said I would put our incredible miners—and that’s what you are, incredible—back to work,” Trump said after the mine opened last Thursday, likely forgetting that his budget slashes 40 percent, or about $1 billion, from federal job training programs.

Dethlefsen said the mine will help the area’s struggling economy but as Quartz pointed out that’s “significantly fewer than the 92 jobs created by the opening of one American supermarket on average.”

Most of the coal isn’t even staying in the country. According to PennLive, “as for where the coal ultimately ends up, as much as 85 percent could be exported overseas to make steel in countries such as South Korea, Turkey, Egypt and Brazil, Corsa officials say.”

Even though Dethlefsen praised Trump for easing regulations and encouraging fossil fuel exploration, FactCheck.org reported that the administration had nothing to do with the Acosta mine opening as development began in September, or before the 2016 election.

“The opening of the Acosta mine has nothing to do with U.S. federal policy,” Trevor Houser, a partner with the economic research company Rhodium Group, told FactCheck. That’s because the mine produces metallurgical coal, which is used for iron and steel-making, whereas thermal coal is used for energy generation.

As FactCheck explained, about 90 percent of U.S. coal production is thermal coal “and it has not been doing well at all in recent years,” with coal consumption down nearly 18 percent between 2012 and 2016. And while Trump has added about 1,000 total coal jobs since taking office, the current number of coal mining jobs, 51,000, is 43 percent lower than in January 2012.

Meanwhile, America’s clean energy jobs have soared, with solar employment expanding 17 times faster than the overall economy and wind turbine technicians are expected to be the fastest-growing occupation over the next 10 years.

However, it’s unclear how long this growth might last with Trump’s proposal to cut about 70 percent from the Office of Energy Efficiency and Renewable Energy’s budget.