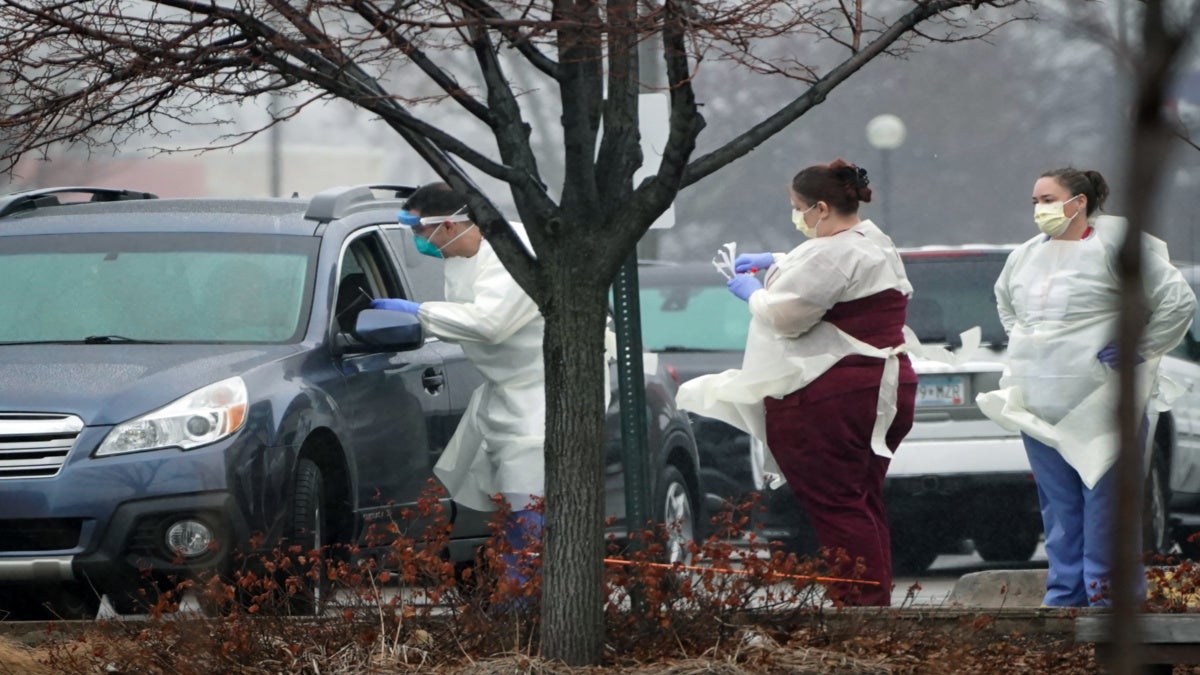 Medical staff at a Fairview clinic in Minnesota appear to administer a COVID-19 test to a patient in the clinic parking lot on March 12, 2020. Shari L. Gross / Star Tribune / Getty Images

The COVID-19 pandemic has already swept through cities and urban centers.

Now, the illness appears to be building like an infectious prairie fire in rural America, as well as in larger towns in the Midwest.

That wasn’t the case just a few weeks ago.

“Many rural communities aren’t seeing anything. They’re simply having to prepare for what they know is coming,” Dr. Randall Longenecker, the assistant dean for rural and underserved programs at Heritage College of Osteopathic Medicine at Ohio University, told Healthline in late March. “[But] it will come, no matter what.”

The number of COVID-19 cases in Minnesota, Wisconsin, North Dakota, South Dakota, and Iowa has been steadily increasing.

In South Dakota, more than 1,300 residents have now tested positive for COVID-19. More than 500 of those cases are employees of the Smithfield Foods meat processing plant in Sioux Falls that was closed until further notice on Wednesday.

A team from the Centers for Disease Control and Prevention (CDC) visited the plant on Thursday. The complex, which employs 3,700 people, is now considered the largest COVID-19 hot spot in the nation.

Despite these increases in infections, there are still five states, four of them in the Midwest, that have no shelter-in-place orders.

There are also three other states that have restrictions in only some of their communities.

Among the states without any sheltering orders is South Dakota, which now has by far the highest number of COVID-19 cases per capita than any Midwestern state.

In that state, the owner of the Nebraska Crossing mall plans a “soft reopening” of his shopping center next weekend. That complex sits along Interstate 80 between the population centers of Lincoln and Omaha.

All of this has experts worried about what’s in store for the middle of the country.

A potential recipe for disaster

Rural areas may end up being among the hardest hit regions due to their demographics and lack of resources.

The 15 percent of people in the United States who live in rural areas are largely a higher-risk population that’s particularly vulnerable to serious outcomes with COVID-19.

In addition, many people in rural areas live 30 or more miles away from the nearest hospital.

“Systems that are under stress during routine times will be more stressed during disasters and times of crisis. Sometimes we forget those systems that are at the brink,” said Tricia Wachtendorf, PhD, director of the Disaster Research Center at the University of Delaware.

Rural health systems already stretched financially are therefore particularly vulnerable, but so are rural areas that don’t have as deep a bench of resources to tap when times get tough.

“When you start thinking about recovery trajectories and impacts, the extent to which there is community functioning before a disaster has strong implications in that recovery trajectory post-disaster,” Wachtendorf told Healthline. “That goes right down the spectrum: transportation systems, employment support, hospitals and public health, food security — all the key systems. If those are low pre-disaster, those are going to have substantial effects on what communities experience during the disaster, as well as their post-disaster recovery.”

Nearly 20 percent of the population in completely rural counties is 65 and older, according to U.S. census data, compared with around 15 percent in mostly urban centers.

Both older age and cigarette smoking are two factors tied to a higher risk of severe illness or death from COVID-19.

Despite these statistics, there’s a sense among some experts that some people in rural communities, as well as political leaders in these states, haven’t taken the threat of COVID-19 seriously enough.

Initially, “Less dense areas might be at an advantage compared to geographic areas that are more densely populated, and they may also be less connected to some areas where there’s a concentrated case,” Wachtendorf said in late March.

But once these communities do start to see cases, they might struggle to fill basic public safety and administrative roles, especially if people such as police officers and firefighters get sick and have to self-quarantine.

Despite this potential threat, Mississippi Gov. Tate Reeves, Missouri Gov. Mike Parson, and Alabama Gov. Kay Ivey all rejected calls in late March to issue shelter-in-place orders that are common in other states to try to slow the spread of the disease and help flatten the curve.

Doctors in Tennessee also urged that state’s governor in late March to issue a shelter-in-place order.

In addition, Reeves issued an executive order in late March that seemed to exempt most businesses in Mississippi from closures, muddying the public’s understanding of how to respond to the crisis.

Neighboring Louisiana saw its COVID-19 cases soar in late March, recording the highest growth rate in the world in the first 2 weeks since its first confirmed case.

But even there, with Louisiana Gov. John Bel Edwards urging residents to stay home, some were defying those recommendations.

In the town of Central, Louisiana, for instance, the Life Tabernacle Church continued to host gatherings of 1,000 people or more as COVID-19 cases mount.

These religious services were held as President Donald Trump suggested that some businesses could reopen and people could “pack” churches on Easter Sunday.

The president backed off that notion and then announced he has extended his administration’s guidelines on social or physical distancing until April 30.

Experts say any lack of physical distancing could have ripple effects that overwhelm rural hospitals and disrupt essential services down the line.

“If someone gets sick in those areas or an agency or department gets sick, there may be fewer people within those agencies to continue operations, leaving that particular community more vulnerable,” Wachtendorf said.

A lack of hospitals

Medical facilities known as critical access hospitals, which have 25 beds or fewer and are 35 miles away from the closest facility, are among the ones that have closed at the highest rates in the past two decades, even as their closure rate slowed somewhat thanks to provisions in the Affordable Care Act.

In the meantime, however, “Rural hospitals right now are seeing a steep decline in activity, empty beds, and empty practices, so for right now there’s a steep loss of revenue.”

For those rural hospitals — ones that remain after more than 80 have closed since 2010 and nearly 700 more found themselves on the brink of closure — that loss of revenue illuminates a dangerous teetering in our health system, as administrators try to balance the costs of staying afloat against the predicted flood of eventual COVID-19 cases.

In the meantime, many of these critical access hospitals are operating with bare-bones staff.

“What’s happening is the wave hasn’t come yet here,” said Jane, a travel nurse working at a critical access hospital in Wisconsin. “We’re down to two teams working here per day, which is OK most days because procedures keep getting canceled and falling off, but yesterday, we were working our (tails) off and I’m wondering why are we down to a skeleton crew? It’s because they’re trying to save money for when the s— really hits the fan.”

By then, supply shortages and other issues may have already rocked the system, Longenecker said.

“Hopefully some things will be worked out, like the supply of testing and supply of personal protective equipment, or not. They may have already sent them to the city,” he said.

“What scares me is that — because there’s not confirmed cases up here yet and there’s only two in the county. I’m just worried that we’re going to get overlooked when it happens, and we’re going to be up a creek,” she told Healthline. “I think a hospital is not a place you want to be right now unless you absolutely have to be.”

Rural zip codes lost almost 20 percent of their hospital beds between 2006 and 2017, according to a study from the Economic Innovation Group (EIG), a bipartisan public policy organization.

But that doesn’t tell the whole story. Within this study, EIG found that economically distressed rural areas were especially affected.

Wachtendorf noted the example of hospital closures funneling people from a wide geographic radius into central, overburdened regional health centers, as well as local clinics that aren’t full hospitals, as potential points of strain in the system in a crisis.

Rural areas that rely on farming as a main source of income might also find themselves in a particular bind.

“It’s not like you could just take 2 weeks off and think the crops will still be there,” Wachtendorf said. “Some of that seasonal work is very much dependent on timing. And it’s not just a matter of pushing off that production for 2 weeks or a month. It’s either done now or it’s not done at all.”

Is telemedicine the answer?

One way in which hospitals and doctors are dealing with this ongoing crisis in rural and urban centers is through telemedicine.

Not every patient is a patient with COVID-19, so those who can receive care from their homes and thus stay out of overburdened hospitals are a benefit to the system at large.

“Prior to COVID-19, we were seeing much more of a demand for telehealth in rural areas,” said Pamela Ograbisz, DNP, FNP-BC, director of telehealth at LocumTenens.com, a healthcare staffing agency. “In a way, COVID-19 leveled the playing field in healthcare by erasing the boundaries between rural areas and large cities. It doesn’t matter where patients are located; they need care.

“Because of this and because clinicians are overwhelmed, demand for telehealth has gone up across the board,” Ograbisz told Healthline.

But telemedicine can only go so far, and won’t fix the fragmentary nature of the American healthcare system, Longenecker said.

“It’s hard, as individualistic as we are as Americans, for us to think about the good of the community or think epidemiologically, which is a very different way of thinking than just thinking about me and my family,” he said. “But anything we could do to be less fragmented and to be more systemic (as a healthcare system) would be really, really good.”

Reposted with permission from Healthline. For detailed source information, please view the original article on Healthline.