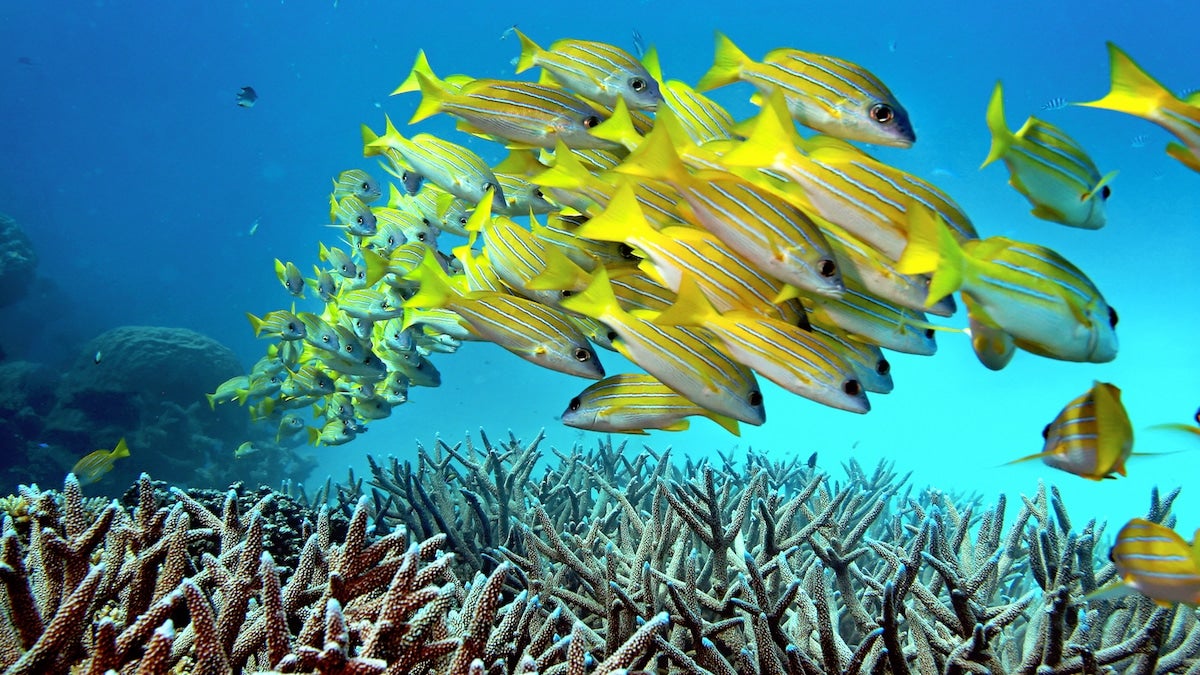 Coral bleaching leaches a reef of its yellows, greens and pinks, leaving behind a graveyard of brittle white.

Now, new research indicates that it isn’t just the coral that loses its colors after a bleaching event. The fish that find a home there become less brilliant, too.

“We found that as the cover of structurally complex corals increases on a reef, so does the diversity and range of colours present on fishes living in and around them. But, as the cover of turf algae and dead coral rubble increases, the diversity of colours declines to a more generalised, uniform appearance,” research leader Dr. Christopher Hemingson, who recently earned his Ph.D. from James Cook University’s Centre of Excellence for Coral Reef Studies, said in a press release.

The research, published in Global Change Biology March 16, looked at a dataset of fish color and environmental conditions in the Great Barrier Reef spanning 27 years. Specifically, the data set focused on the coral and fish in and around Orpheus Island, Science Alert reported. These reefs were hit especially hard by the Great Barrier Reef’s first mass bleaching event in 1998, which devastated branching corals and led to a “complete shift” in fish communities. For example, lemon damselfish and green coral goby have declined by about two-thirds in the 30 years since.

“A colourful fish blends into a colourful reef, and if you’re brightly coloured in a drab environment you may not fare so well in avoiding predators and things like that,” Hemingson told the Brisbane Times.

Further, the structure of the marine environment makes a difference. The 1998 bleaching event led to the deaths of branching corals that provide shelter.

“Having places to hide from predators may have allowed reef fishes to evolve unique colourations due to a reduced reliance on camouflage to avoid being eaten,” Hemingson said in the press release.

Including the 1998 event, the Great Barrier Reef has suffered five mass bleaching events in the last 30 years, according to Science Alert. And it may be in the grips of a sixth. Coral bleaching occurs when warmer ocean temperatures force coral to expel the algae that provide them with color and food, and it is considered an important impact of the climate crisis.

Hemingson said in the press release that the corals more resilient to warmer ocean temperatures – massive and boulder corals – do not provide the hiding spots that attract brightly colored fish.

“Fishes with colouration directly appealing to human aesthetics are becoming increasingly rare, with the potential for marked declines in the perceived colour of reef fish communities in the near future. Future reefs may not be the colourful ecosystems we recognize today, representing the loss of a culturally significant ecosystem service,” the study authors wrote.

This might not harm the future reefs from an ecological perspective, Hemingson said in the press release.

“But in a human context, loss of these colourful species may trigger a broad range of human responses, including grief,” Hemingson said in the press release.