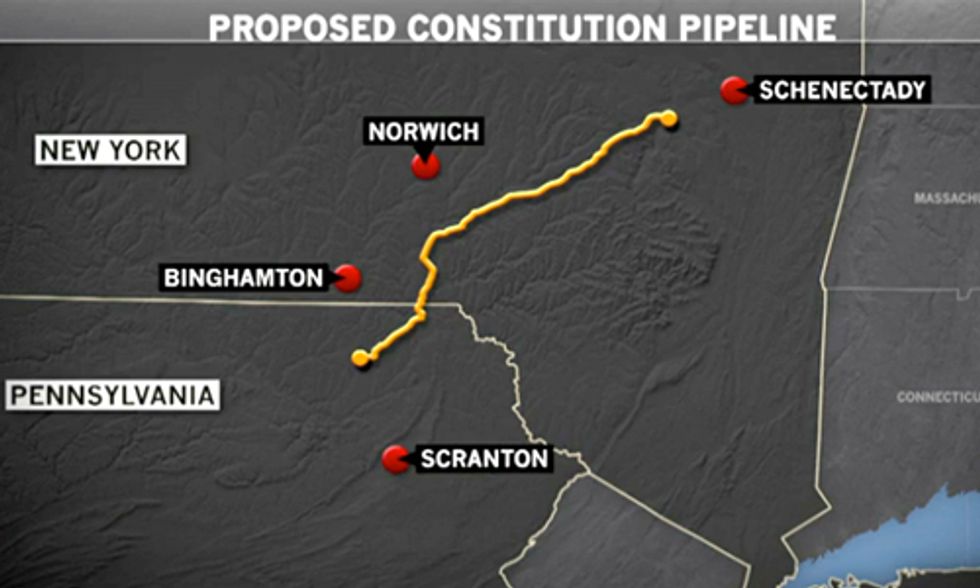 “This Constitution Pipeline is about enriching a few billionaires by impoverishing the people of New York State," Robert F. Kennedy, Jr. told Ed Schultz on MSNBC's The Ed Show. "And the bullying that we’ve seen go along with this, the corruption—FERC is really a rogue agency, it’s a classic captive agency, it issued this permit illegally.”

A popular movement is building against the Federal Energy Regulatory Commission (FERC), for its outrageous rubber-stamping of permits for expansion of the gas industry. Kennedy’s powerful indictment of FERC on national television last week was the latest manifestation of this hopeful, much-needed development.

Kennedy was speaking about the Constitution Pipeline, one of about eight interstate pipelines originating in or going through Pennsylvania (ground zero for fracking in the Northeast) that are currently in some stage of getting approval from FERC, which interstate gas pipelines need to do. And the approval process is essentially pro-forma. In the two and a half or so years that I’ve been actively involved with this movement, I know of none proposed that have been rejected. It’s the same with proposed export terminals. At a federal Court of Appeals hearing last year in Washington, DC it was stated in open court that 95 percent or more of such proposed pipelines are approved, with no disagreement from the FERC lawyers present.

Some of the other pipelines which FERC will likely approve—barring the kind of organized people’s uprising we have seen around the Keystone XL pipeline—are: Penn East, Mariner East 2, Atlantic Sunrise, Atlantic Coast, Algonquin Incremental Market and Northeast Energy Direct.

Virtually all of these pipelines are being built, in part, to ship fracked gas from Pennsylvania, West Virginia, Ohio and possibly elsewhere in the Marcellus Shale region to gas export terminals that are being built or projects that are proposed, including in Nova Scotia, off the coast of NY/NJ and Cove Point in Maryland on the Chesapeake Bay.

The leadership of FERC knows that they’ve got a problem. Here is how FERC Chair Cheryl LaFleur put it at the National Press Club on Jan. 27:

“These groups are active in every FERC docket … as well as in my email inbox seven days a week, in my Twitter feed, at our open meetings demanding to be heard and literally at our door closing down First Street so FERC won’t be able to work. We’ve got a situation here.”

Last week, at a meeting of the FERC Commissioners, there was reference a number of times to the problem of “environmental activists.” This was in reference to the planned expansion of the gas industry to replace expected coal industry retrenchment in coming years.

Actually, it’s a lot more than “environmental activists” who are angry at FERC. One of the noteworthy aspects of this movement is the involvement of affected landowners, property owners, farmers, impacted communities, local elected officials and others who definitely don’t see themselves primarily as environmentalists.

Who was Chair LaFleur referring to when she talked about groups “at our open meetings demanding to be heard, and literally at our door closing down First Street so FERC won’t be able to work?” She was referring to a network of groups and individuals a little more than a half year old, Beyond Extreme Energy.

Beyond Extreme Energy (BXE) grew out of the (continuing) battle to prevent an export terminal from being built at Cove Point in Calvert County, Maryland. Ever since its first major action, a week of nonviolent direct action in November at the FERC headquarters in DC that disrupted their functioning, it has stayed active: canvassing and getting arrested in Calvert County; disrupting a meeting of financial analysts and potential Dominion investors in NYC; supporting fracktivists in Pennsylvania who were arrested chanting “Ban Fracking Now” at the inauguration of Pennsylvania Gov. Tom Wolf;  demonstrating at the inauguration of the new Maryland governor, who wants to open his state to fracking; and attending every monthly FERC commissioners meeting since November. At the January meeting Chair LaFleur, in an unprecedented move, adjourned it and cleared the room when we began speaking, one by one, about the human and environmental damage FERC’s decisions are having.

Now BXE is getting organized for another week-plus of actions in DC at FERC. From May 21-29 we will let FERC and the country know that we are not going away and that we will not stop until they become something very different than what they are right now. FERC says that its mission is to provide "safe, efficient, sustainable" energy for the country. It is failing on all counts. FERC must fulfill its mission and make decisions based on what’s best for all of us instead of the fracked-gas industry.

The issue of FERC is more than an issue for communities impacted by their decisions. It is a basic social justice issue, an issue of corruption of democracy.

It is unquestionably an issue that the climate movement has to take up and do so now. The proposed U.S. Environmental Protection Agency Clean Power Plan explicitly lists a shift from coal to natural gas as a way for states to meet the plan’s emissions reductions objective, which is ridiculous given that gas is a fossil fuel and given the extensive methane leakage associated with gas production, distribution and storage.

The BXE actions in late May are coming at the right time. Let’s seize the time!