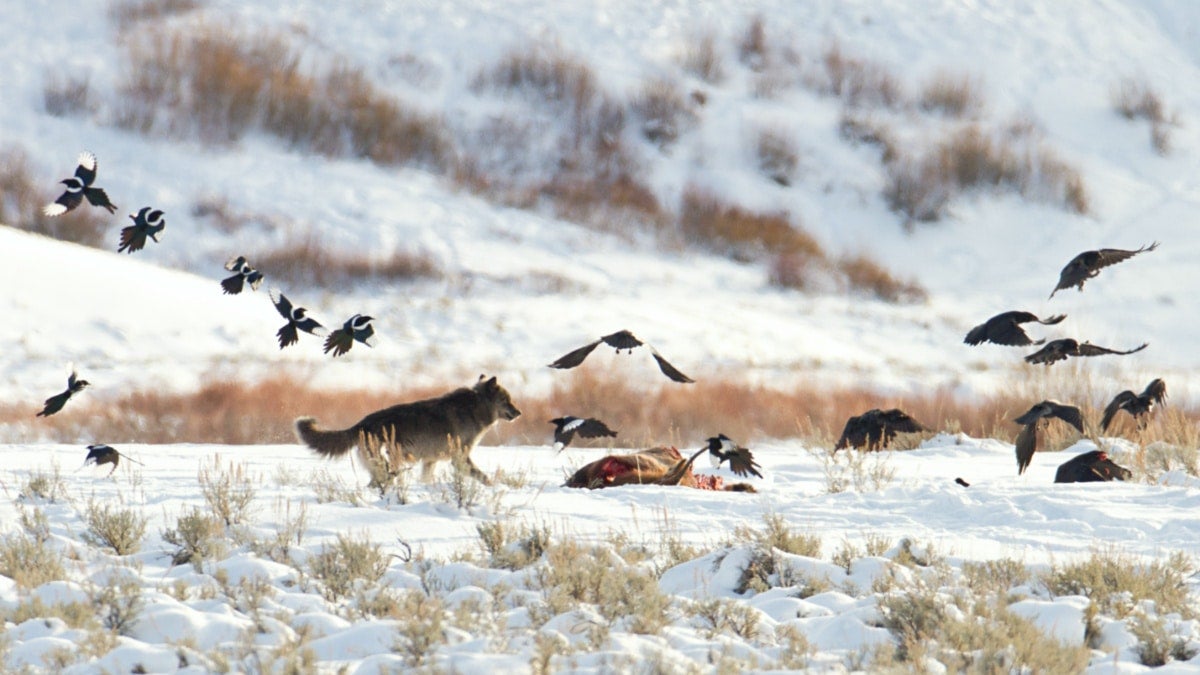 A wolf chases magpies and ravens from an elk carcass in Yellowstone National Park. Jim Peaco / NPS, CC by 4.0

By Rebecca Niemiec and Kevin Crooks

Colorado voters will decide on Nov. 3 whether the state should reintroduce gray wolves (Canis lupus) after a nearly 80-year absence. Ballot Proposition 114 would require the state to develop and oversee a science-based plan to restore wolves, focused in Western Colorado and initiated by the end of 2023.

Creating environments that allow humans and carnivores to thrive and that minimize social conflict is a global challenge. Examples include black bears and grizzly bears in North America, pumas in North and South America, wolves in Europe, lions in Africa and tigers in India.

As researchers who study the social and ecological dimensions of human-carnivore coexistence, we see the vote on Proposition 114 as a catalyst for broader discussions about carnivore conservation and management. In our view, the best way to find workable solutions is to include people representing all sides of the issue in shared decision-making.

Back by Popular Demand?

Gray wolves once roamed much of North America, but hunting, trapping and poisoning in the 19th and 20th centuries greatly reduced their numbers. Living with Wolves, CC BY-ND

For thousands of years before white settlers pushed west, gray wolves ranged throughout the area that is now Colorado, from the Western Slope and Front Range of the Rocky Mountains into the Eastern Plains. As the region was settled, government agencies started paying bounties for wolves and other predators that were seen as threats to livestock and game. By the 1940s, shooting, trapping and poisoning had systematically eradicated wolves from Colorado.

In recent decades a few lone wolves migrated to Colorado from adjacent states, but were killed or simply disappeared. Then, starting in 2019, a pack of up to six wolves and a separate lone wolf were sighted in northern Colorado. Recent media reports indicate that some of these wolves may have been shot and killed along the Wyoming-Colorado border.

Several scientific studies have concluded that Colorado can still support a self-sustaining, viable wolf population. Wolves can live successfully in many types of habitats where there is enough prey and where humans will tolerate them.

Today gray wolves are protected in Colorado as an endangered species. However, they have no legal protection in most of Wyoming, where they can be killed on sight. This makes it challenging for wolves to migrate from the Yellowstone region, where they were reintroduced in the mid-1990s, through Wyoming into Colorado.

The only other adjoining states with resident wolf populations are Arizona and New Mexico, where the endangered subspecies of Mexican gray wolf was reintroduced starting in the 1990s. But federal policy requires that wolves leaving the reintroduction zone be recaptured and returned to it. Ultimately, then, if Coloradans want to bring wolves back, having wildlife biologists reintroduce them is the most likely route.

Proposition 114 was placed on the ballot through a citizen initiative led by the Rocky Mountain Wolf Action Fund. It asserts that gray wolves are endangered in Colorado; were historically an essential part of Colorado’s wildlands, but were exterminated by humans; and will help restore ecological balance if they are reintroduced.

Wolves are predators at the top of the food chain. Studies from national parks suggest that wolves’ presence can produce ecological effects that ripple through ecosystems. But science also tells us that such impacts are difficult to predict outside of national parks, including in Colorado.

A wolf chases magpies and ravens from an elk carcass in Yellowstone National Park. NPS/Jim Peaco, CC BY

Proposition 114 has strong support in Colorado. Statewide surveys conducted by phone, by mail and online over the past two decades have found that 66% to 84% of respondents supported reintroducing wolves. This support is consistent across different regions of the state and diverse demographic groups.

In a survey of Colorado residents that we conducted in 2019, the prospect that wolves could contribute to a balanced ecosystem was the most commonly cited reason for supporting reintroduction. Other arguments included people’s cultural and emotional connections to wolves, and moral arguments that restoring a species humans had eradicated was the right thing to do.

While overall public support is strong, over half of Colorado’s 64 counties have passed resolutions against restoring wolves. Many ranching and hunting associations are actively campaigning against the ballot measure.

In our 2019 study, we found that media coverage in the state focused more strongly on perceived negative impacts associated with wolf reintroduction than on beneficial effects. Surveys show that resident concerns include threats to human safety and pets; wolf attacks on livestock; and the potential for wolves to reduce deer and elk populations, threatening hunting opportunities.

This measure is the first giving voters in the U.S. an opportunity to weigh in on bringing back a native species. Addressing the issue through a ballot measure adds a unique twist to public and media discussions about wolves.

Supporters call it a democratic way to ensure that the public’s values are recognized. They also argue that voters are deciding only whether wolves should be reintroduced, while allowing experts at the state wildlife agency to create a reintroduction plan based on the best available science.

According to a recent poll of 900 demographically representative likely voters, two-thirds supported “restoring wolves in Colorado,” echoing similar polls over the past 25 years. https://t.co/4Q8gYe0n9M

Opponents assert that wildlife management decisions should be left to state experts. As some critics note, the Colorado Parks and Wildlife Commission has decided against wolf reintroduction four times, most recently in 2016. The commission is a citizen board appointed by the governor and made up of sportspersons, agricultural producers, recreationists and nonconsumptive wildlife organizations. Opponents also point out that people who do not support reintroducing wolves, such as ranchers, will bear a disproportionate share of the costs.

These arguments reflect deeper power dynamics that influence wildlife management across the U.S. Many wildlife agencies tend to represent people and organizations who believe wildlife should be managed for human benefit, particularly hunting and other consumptive uses.

These agencies receive much of their funding from hunting and fishing license fees. And people who believe wildlife should be managed to benefit humans tend to support using lethal methods to control wolves and other carnivores. They also are more likely to oppose reintroducing them where they have been eradicated.

However, support for this view is declining. A growing share of Americans believe humans should coexist with carnivores and oppose managing them primarily for human benefit. But because agency decisions don’t always reflect these increasingly popular values, people who advocate coexisting with nature are seeking a greater say via the ballot box.

Studies suggest that ballot initiatives like 114 will become more common as public values toward wildlife change and more diverse groups seek to influence wildlife management. For us, the key question is how to recognize and incorporate these differing values as agencies make decisions.

Research drawing on insights from psychology, political science and sociology suggests that it is critical to run truly participatory processes that engage government agencies and people who have a stake in the issue in shared decision-making. Fostering dialogue between groups that value wildlife differently can build empathy and mutual understanding and foster compromise. Broadening the conversation in this way is essential for coexisting with carnivores with minimal impacts on predators and people.

Rebecca Niemiec is an Assistant Professor in the Human Dimensions of Natural Resources, Colorado State University.

Kevin Crooks is a Professor of Fish, Wildlife, and Conservation Biology and Director, Center for Human-Carnivore Coexistence, Colorado State University.

Disclosure statement: Rebecca Niemiec has received funding from the National Geographic Society, USDA National Wildlife Research Center, Turner Endangered Species Fund, Sasei Foundation, a private philanthropist, and Colorado State University to support research, public engagement, and educational outreach on the potential restoration of wolves to Colorado. She previously served on the scientific advisory board of the Rocky Mountain Wolf Project. Her outreach efforts are intended to educate the public and inform science-based policy but not to advocate for or against the ballot initiative.

Kevin Crooks has received funding from the USDA National Wildlife Research Center, Turner Endangered Species Fund, Sasei Foundation, a private philanthropist, and Colorado State University to support research, public engagement, and educational outreach on the potential restoration of wolves to Colorado. He previously served on the scientific advisory board of the Rocky Mountain Wolf Project. His outreach efforts are intended to educate the public and inform science-based policy but not to advocate for or against the ballot initiative.