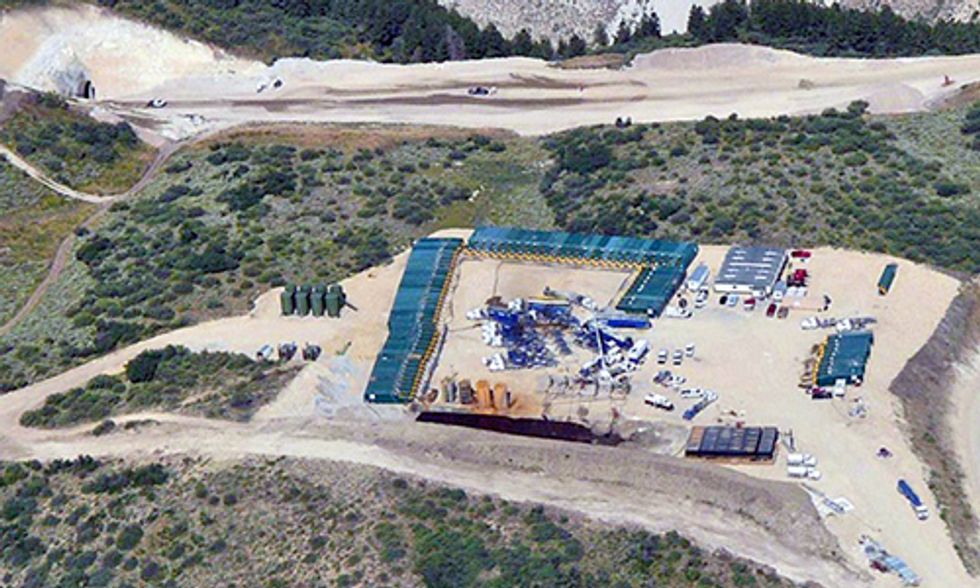 In a state wracked with clashes over its explosive expansion of fracking, residents of Lafayette, Colorado just outside Boulder, have filed a motion for a preliminary injunction to prevent the state of Colorado, Gov. John Hickenlooper and the Colorado Oil and Gas Association (COGA) from taking away the town's right to ban the practice.

Many Colorado citizens want the right to decide for themselves whether drilling sites like this one should be allowed in their communities. Photo credit: The Endocrine Disruption Exchange

Citizens in Lafayette, which is a Home Rule Community under Colorado law, voted last November to pass a Community Bill of Rights under its Home Rule Charter that banned fracking and established the right of citizens to a healthy environment. In December COGA sued the city to overturn its Bill of Rights, claiming that while citizens don't have a right to clean air and water or self-governance, COGA has a constitutional right to frack under the state's Oil and Gas Act.

The plaintiffs are part of the Colorado Community Rights Network, a group founded late last year to protect the rights of communities to make decisions locally on issues like fracking. They are represented by the Community Environmental Legal Defense Fund, a Pennsylvania-based group that provides affordable representation to communities clashing with deep-pockets corporations. CELDF executive director Thomas Linzey said of the Lafayette lawsuit:

The right to local, community self-government serves as the foundation for the American system of law. Yet the people’s right to self-governance has been routinely ignored by our elected representatives and overridden by the courts in favor of corporate rights. This class action lawsuit is merely the first of many by people across the United States whose constitutional rights to self-govern are routinely violated by state governments working in concert with the corporations that they ostensibly regulate. The people of Lafayette will not stand idly by as their rights are negotiated away by oil and gas corporations, and by their state government.

The lawsuit follows a recent deal between Gov. Hickenlooper and Colorado congressman Jared Polis to remove four contentious pro- and anti-fracking measures from this November's state ballot in favor of an 18-member commission, with both citizens and oil and gas industry representatives, to work out an agreement on the issues to submit to the legislature for approval.

Many environmentalists took a dim view of this compromise, despite the likelihood that the industry would spend tens of millions of dollars to buy itself another ballot victory.