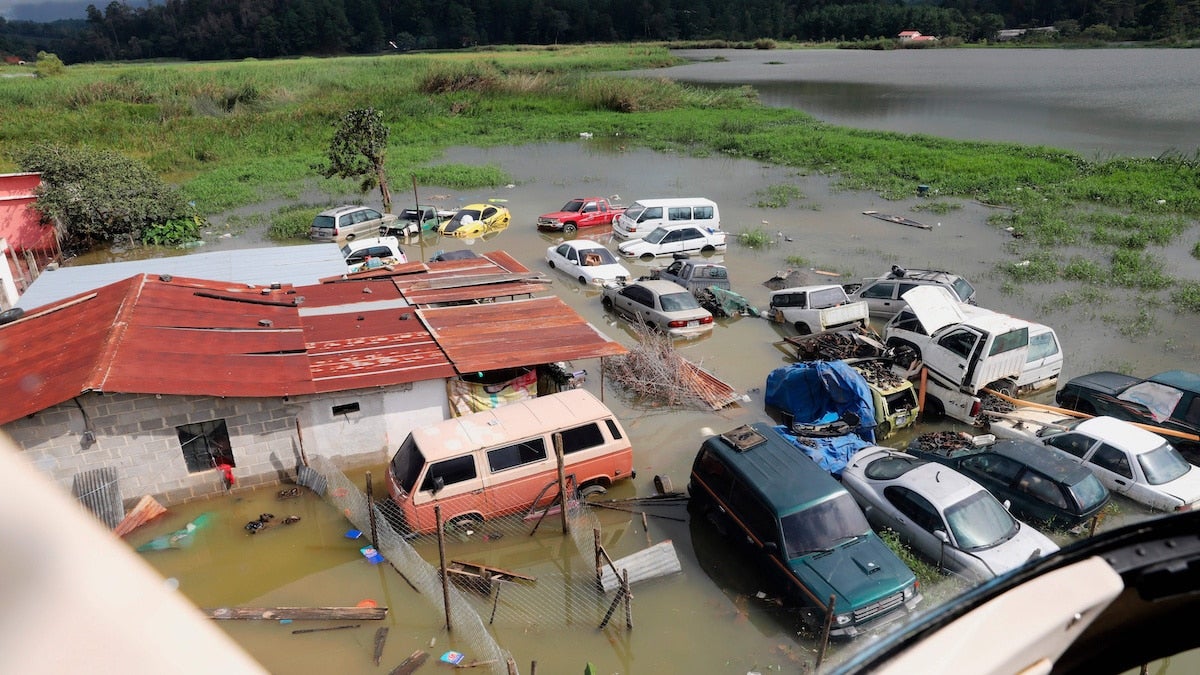 Aerial view of a flooded area in the village of Queja, in San Cristobal Verapaz, Guatemala on Nov. 7, 2020 where it is estimated that dozens of people died after a mudslide caused by the passage of Hurricane Eta. ESTEBAN BIBA / POOL / AFP via Getty Images

A large landslide caused by torrential rains during Hurricane Eta buried half a small village’s residents, leaving the other half searching for family members and neighbors in Guatemala on Tuesday, The Washington Post reported.

Officials deemed Queja, a farming community of a few hundred residents, “uninhabitable,” and ended rescue operations, calling for the survivors to abandon the area now mostly covered in tons of rock and mud. 99 people were reported missing, with 44 confirmed deaths.

Mayor Ovidio Choc, representing the San Cristobal Verapaz region, including Queja, said the evacuated village would be declared a cemetery.

The former director of Guatemala’s national disaster management agency said the country is ranked among the highest risk countries for natural disasters, based on data by the World Risk Index.

“It is a structural problem that is linked not only the threat or the probability of producing elements like Eta, but rather other factors that make us vulnerable and are directly tied to the development of the country,” Alejandro Maldonado said, The Washington Post reported.

The inability to invest in mitigation plans, and deforestation were likely to be circumstances that caused the landslide, noted Maldonado.

The residents of Queja are the latest addition of what is being called the “great climate migration.” Climate change is causing sea level rise and extreme weather conditions, such as intense heat, drought, wildfires and enlarged hurricanes and typhoons, which induce mudslides, landslides and flooding, forcing many to flee their homes, never to return.

And climate refugees are predicted to increase in number in the coming years as more natural disasters occur. According to Ecological Threat Register, a September 2020 report by the non-profit think tank Institute for Economics & Peace, one billion people live in areas were there is not enough infrastructure in place to combat ecological changes.

2020 already claims the largest number of hurricanes and wildfires ever recorded.

Hurricane Eta is expected to hit Florida’s Gulf Coast in its fourth landfall on Wednesday, as a Category 1 hurricane, bumped up from a subtropical storm with rains hitting southern Florida on Sunday and Monday. While diminished in intensity from its peak in Central America, landslides and flooding are expected.