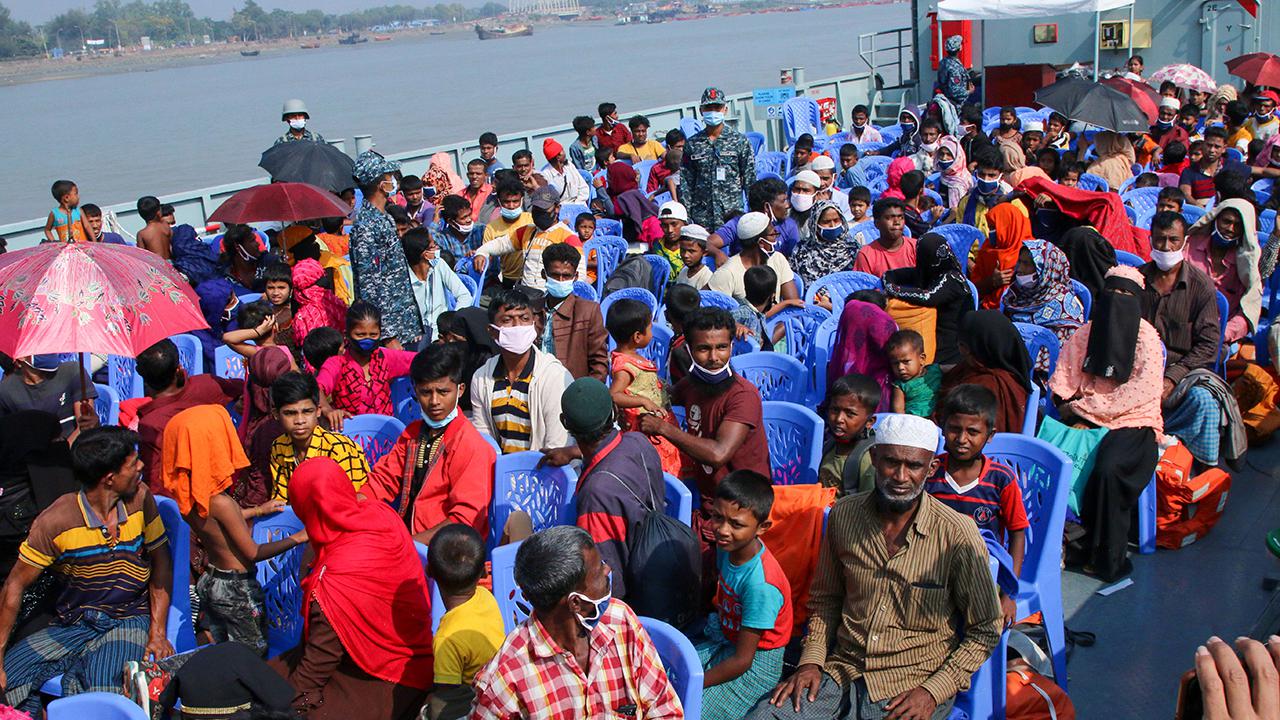 Rohingya refugees board a Bangladesh Navy ship to be transported to the island of Bhashan Char in Chittagong on December 4, 2020. AFP / Getty Images

On December 4, about 1,600 Rohingya traveled across the Bay of Bengal in seven navy boats from Chattogram to Bhasan Char. Bangladesh plans to move 100,000 families to the island.

The move poses serious concerns, both with regard to the environment and human rights.

Located about 18.6 miles (30 km) from the mainland, Bhasan Char is low-lying and prone to flooding. Therefore, it has been uninhabited. The island only formed in the past 20 years as a result of silt buildup. Bhasan Char rests at the confluence of three large rivers, the Brahmaputra, the Ganges and the Meghna River, which collectively bring rich deposits of silt to the bay.

Bhasan Char rests in the Bay of Bengal subject to frequent cyclones, at risk of intensifying as they circle in the Bay’s funnel shape. On average, three to four storms form in the basin and Bhasan Char lies in the historical path of cyclones. This year, Category 5 cyclone Amphan, one of the strongest on record, formed in the Bay of Bengal. Cyclone Amphan, as Refugees International reported, caused great devastation not far from Bhasan Char and such super cyclones are more likely in the future.

The move of Rohingya refugees also poses serious human rights concerns. The United Nations (UN) stated it “has not been involved in preparations for this movement or the identification of refugees and has limited information on the overall relocation exercise.” It added, “The United Nations takes this opportunity to highlight its longstanding position that Rohingya refugees must be able to make a free and informed decision about relocating to Bhasan Char based upon relevant, accurate and updated information.”

The government asserts that the movements to the island were and will be voluntary. However, Human Rights Watch “spoke with 12 families refugees who said their names were on the list, but that they had not willingly volunteered to relocate.”

One refugee told Human Rights Watch, “My name appeared on the list so now the CiC [Camp-in-Charge, camp authority] has threatened me, saying that since my name is there, I must go. He said, even if I die, they will take my body there [to Bhasan Char]. I don’t want to go to that island.”

Daniel Sullivan, Refugees International, told EcoWatch, “there are troubling indications that Rohingya ‘volunteers’ are being coerced or misled. When I visited the camps last year, refugees told me they believed – falsely – that they would receive money or gain Bangladeshi citizenship if they volunteered to move to Bhasan Char. Other groups have reported similar misinformation today and some people on the volunteer lists say they never agreed to be relocated.”

Another refugee told Human Rights Watch that he put his name on the list because camp leaders told him that those on the list would be given priority to repatriate to Myanmar and be paid 5,000 taka (US). But he changed his mind about relocating when he heard that those currently being detained on the island are being held in “prison-like facilities” and don’t have freedom of movement.

Freedom of movement is a key right upon which the UN insists, stating “refugees who choose to move to Bhasan Char should have basic rights and services on the island, which would include effective freedom of movement to and from the mainland, as well as access to education, health care, and livelihood opportunities.”

Being sequestered on an island without freedom of movement recalls the situation of refugees imprisoned on Nauru in the Pacific.

The UN also stated that any relocations should be preceded by comprehensive technical assessments to “review the safety, feasibility and sustainability of Bhasan Char as a place for refugees to live.” It continued, “the United Nations is prepared to proceed with the technical and protection assessments, if permitted by the Government.”

Bangladesh states that it has spent 2 million fortifying embankments to counter any future flooding, building housing, schools, roads, hospitals, mosques and shelters in case of cyclones. The island will be able to house 100,000 people.

Yet refugees interviewed by Human Rights Watch say they are denied freedom of movement and have no access to sustainable livelihoods or education.

Sullivan, Refugees International told EcoWatch, “Serious questions remain unanswered about the physical safety of the island and the ability to provide adequate food, health, and protection services without proper assessments and planning with UN agencies and NGOs. Some of the 300 refugees already on the island have already reported abuse by authorities and have been unable to reunite with family in the main camps.”

Sullivan states, “Bangladesh should allow safety and feasibility assessments by UN agencies and by human rights groups, as Refugees International, Fortify Rights, and other groups requested earlier this year. Without appropriate assessments and adequate information for refugees about the conditions on the island, the move is nothing short of a dangerous mass detention of the Rohingya people in violation of international human rights obligations.”

The refugees were sent to Bhasan Char in early December were bussed up from Cox’s Bazar in coastal Bangladesh where an estimated one million Rohingya refugees live. In August 2017 armed groups attacked military outposts in western Myanmar. Allegedly, the armed groups belonged to the Rohingya. The military of Buddhist majority Myanmar began a harsh crackdown in response. An estimated 700,000 Muslim Rohingya fled. About 300,000 had fled earlier waves of the ongoing persecution in Myanmar that started in 1978 and experienced an uptick in the 1990s.

A 1982 Citizenship Law deprives the Rohingya of citizenship. Then, in 2015, during the Obama-Biden administration, the Burmese government stripped Rohingya of temporary identification cards, leading to a forcible displacement to neighboring countries.

It remains to be seen if the new Biden Administration will work to end the violence unleashed against the Rohingya in Myanmar and work to broker peace to facilitate their safe return to their home country. Biden’s agenda acknowledges the situation and states, “the systematic discrimination and atrocities against Burma’s Rohingya Muslim minority is abhorrent and undermines peace and stability.”

On August 15, 2020, Antony Blinken tweeted: “Today marks 3 years since hundreds of thousands of Rohingya were driven from their homes in Burma. A Biden administration will work tirelessly to support justice for atrocities committed, as well as peace, security, and equal rights for the Rohingya as citizens of Burma.” Blinken is now Biden’s Secretary of State nominee.

While the move of Rohingya to Bhasan Char is troubling, the bigger Rohingya crisis also needs to be resolved. Sullivan of Refugees International states, “While the root causes and long-term solution to the Rohingya crisis lie in Myanmar and Bangladesh deserves great credit for hosting some million Rohingya refugees, the world cannot allow Bangladesh to pursue policies that unnecessarily endanger the Rohingya further.”

Tina Gerhardt is an environmental journalist. She covers international climate negotiations, energy policy, sea level rise and related direct actions. Her work has been published by Grist, The Progressive, The Nation, Sierra and the Washington Monthly.