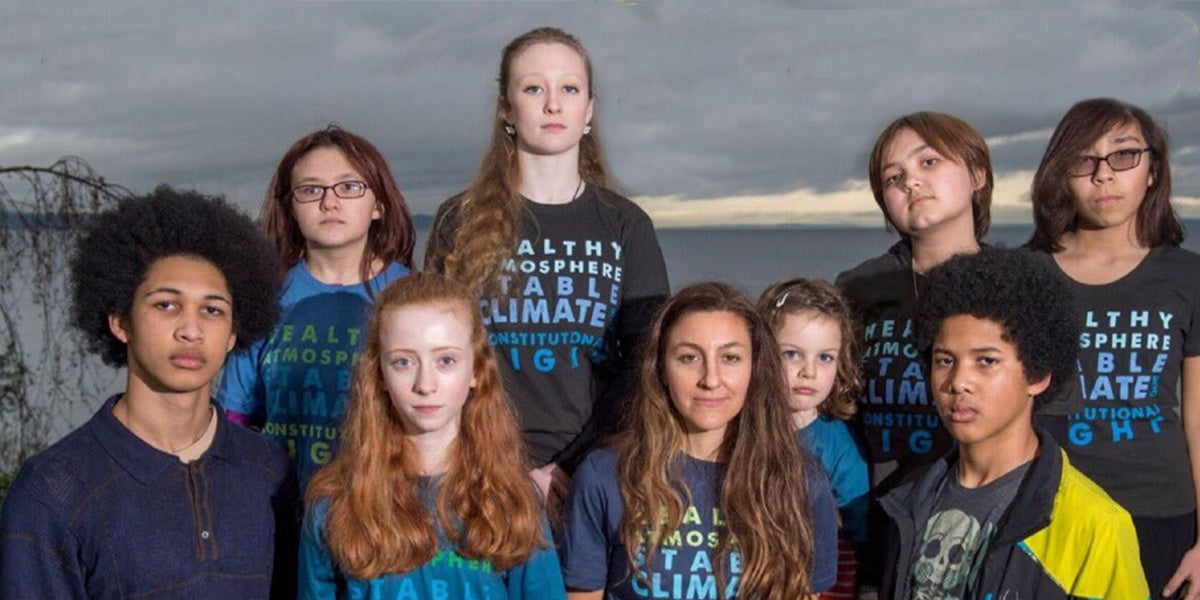 Seven of the 13 plaintiffs with their attorney, Andrea Rodgers and her daughter. Our Children's Trust / Facebook

A group of 13 youths have filed a lawsuit against the State of Washington for breaching its constitutional and Public Trust obligations.

Why? Failure to act on climate change.

In their suit (pdf), filed Friday in King County Superior Court, the plaintiffs, aged seven to 17, say the state, Gov. Jay Inslee, and several state agencies have created and propped up fossil fuel-based energy and transportation systems, thereby fueling greenhouse gas (GHG) emissions and the climate crisis. In so doing, they have created “unconstitutional conditions”—depriving the young people of their rights to a healthful and pleasant environment, and their rights to life, liberty and property.

The climate-fueling actions, the suit says, have put the young people “in a position of danger with deliberate indifference to their safety in a manner that shocks the conscience.”

The state’s current GHG reduction limits “are not consistent with what the scientific consensus says is needed to stabilize the climate system,” the suit states. Rather than take action to address climate change, the suit says the state and the agencies “have acted with shocking deliberate indifference and abdication of duty to address this crisis.” That’s despite fact that the defendants were aware of the impacts of the climate crisis “[s]ince at least the late 1980s, well before these plaintiffs were born.”

The youths were forced to bring the suit “because the fossil fuel-based energy and transportation system created, supported, and operated by the defendants, and the systematic, affirmative aggregate actions which make up and support that system, severely endangers plaintiffs and their ability to grow to adulthood safely and enjoy the rights, benefits, and privileges of past generations of Washingtonians due to the resulting climate change.”

The suit lists the specific dangers the climate crisis is causing the plaintiffs.

For 17-year-old James, for example, a member of the Quinault Indian Nation, his coastal village of Taholah has to be relocated because of sea level rise. “This critical loss of his place-based heritage, a heritage that dates back to time immemorial, is irreplaceable, and permanent,” the suit states. The traditional clamming activities he takes part in are also becoming limited because of climate change impacts including algal blooms, ocean acidification, and warming waters. Increasingly severe storms have also had an impact on his family, causing power outages. All these impacts, the suit says, are causing mental and emotional stress, and without meaningful action to address the climate crisis, the impacts are set to worsen.

A plan for state-level energy and transportation systems that support a healthy climate system is feasible, the suit says:

“A zero-CO2 energy and transportation system for Washington state can be achieved by 2050 without acquiring carbon credits from other states or countries. In other words, actual physical emissions of CO2 from fossil fuels can be eliminated with technologies that are now available or under development.

Experts have already concluded the feasibility of, and prepared a roadmap for, the transition of all of Washington’s energy use (for electricity, transportation, heating/cooling, and industry) to a 100 percent renewable energy system by 2050. In addition to the direct benefits of avoiding a destabilized climate system, this transition will reduce air pollution and save lives and costs associated with air pollution.

Seventeen-year-old plaintiff Aji Piper, for one, is optimistic.

“I feel hopeful because of this lawsuit, like grass tips emerging from thawing snow. This is my state government’s chance to rise up and take responsibility for their actions. This is also a chance for my government to use real science in the policy they create. This lawsuit gives the Washington state government a chance to take the lead and commit to the citizens it serves and the lives it must protect,” he said in a statement.

The lawsuit is being supported by the Oregon-based nonprofit Our Children’s Trust, which has other similar state-level legal actions underway as well as the landmark Juliana v. United States, in which Aji Piper is also a plaintiff.