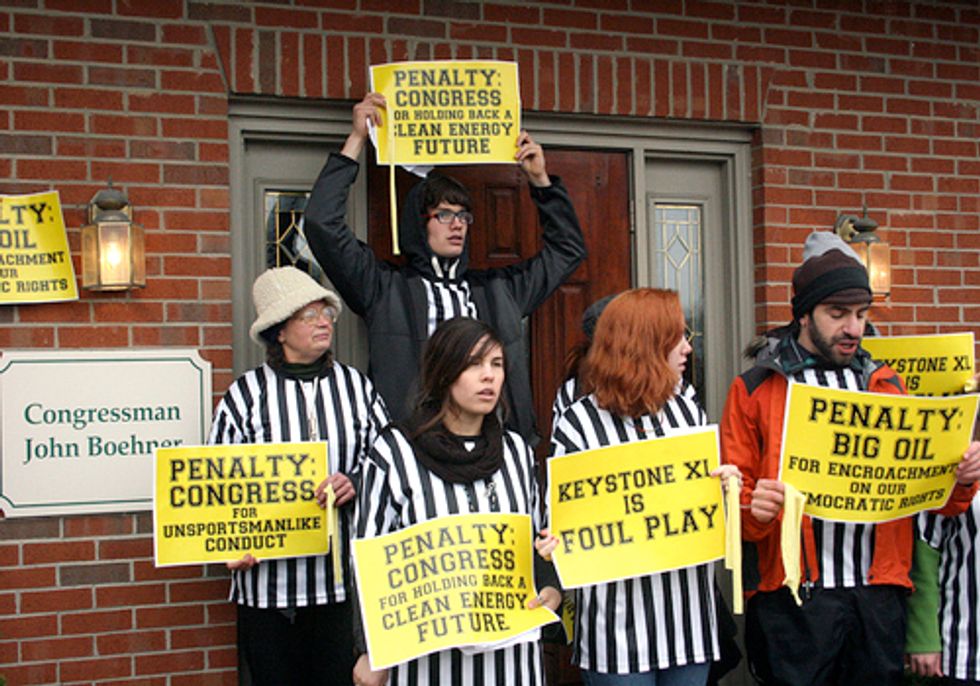 Climate activists fed up with the influence of corporate money on Congress stormed Speaker of the House John Boehner’s office in West Chester today wearing striped ref uniforms to “blow the whistle” on congressional corruption. Activists in uniform blew literal whistles and threw penalty flags to draw attention to the corruption of Congress by corporations and Big Oil, as evidenced by the ongoing campaign to force through the pipeline.

“I’m a writer, and I would never accept money from someone to bias any of my articles. That’s why I’m sick of Congress saying the millions they get from Big Oil hasn’t affected their votes on Keystone XL. Shame on John Boehner for vowing to continue his campaign to force this pipeline,” said Andrew Culp, writer and teacher.

Rep. Boehner accepted $1.1 million from the fossil fuel industry before voting to expedite the Keystone XL “Tar Sands” Pipeline in December, according to OpenSecrets.org.

“I travelled to Washington, DC to stop this pipeline. Meanwhile, Speaker Boehner has sold us out for $1.1 million. I don’t trust his agenda to force through this pipeline any more than I trust the corporations backing the project.” Said Amanda Morgan, student at University of Cincinnati.

The 234 members of Congress who voted for the pipeline have collectively taken $42 million from the fossil fuel industry, according to OpenSecrets.org. On average, each of them received 500 percent more cash from Big Oil than members who voted against the pipeline.

Bill McKibben, founder of 350.org comments: "Look, I'm a Patriots fan, but if Bill Belichick was caught paying off the refs for the Super Bowl I'd be outraged and so would everyone else. So why, really, is it okay that members of Congress take huge sums from companies and then vote on their interests?"

Today’s event was held in solidarity with a rally outside the U.S. Capitol Tuesday, where 500 people answered Bill McKibben’s call for Americans to step up as citizen referees in response to the growing influence of corporations on Congress. Congressional leaders meanwhile have vowed a continued fight against the pipeline prompting ongoing grassroots protests.

This action was made possible by the 350.org action fund: a part of 350.org. 350.org is an international grassroots climate campaign. “350” stands for 350 parts per million, the safe upper limit of carbon dioxide in the atmosphere.