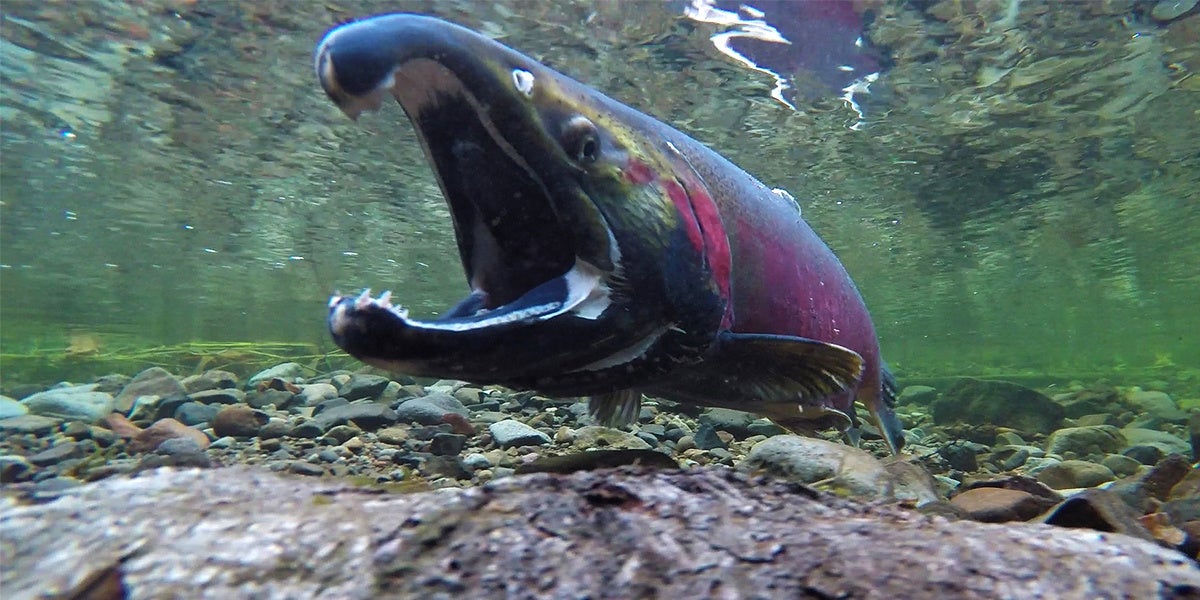 A group of three widely used agricultural pesticides jeopardizes the survival of endangered salmon, according to a National Marine Fisheries Service (NMFS) biological opinion unveiled this week. Chlorpyrifos, malathion and diazinon—all organophosphate pesticides—harm salmon and their habitat to the point that their survival and recovery are at risk, according to the report. Southern Resident Killer Whales, or orcas, are also at risk as they depend on salmon.

The NMFS crafted the report to comply with a 2014 court deadline for the agency to determine whether these pesticides threatened salmon with extinction. Upon determining that these organophosphates jeopardize salmon survival, the biological opinion offers three options for protective measures to avoid that outcome with a variety of measures including buffer zones, spray reduction technologies and pesticide stewardship programs.

“The best available science clearly shows these pesticides are a major threat to endangered salmon and to our orca whales, which need salmon to survive,” said Patti Goldman, managing attorney at Earthjustice. “These pesticides are bad for people every way they are exposed to it and toxic to salmon.”

Chlorpyrifos, widely used in citrus, nuts and orchards, is acutely toxic and associated with neurodevelopmental harms in children. The U.S. Environmental Protection Agency (EPA) refused to ban chlorpyrifos in 2017, despite overwhelming evidence that shows the pesticide harms children, workers and the environment.

Malathion is used in more than 100 food crops, and about half of total applications in the U.S. are on alfalfa, cotton, rice and wheat. A number of growth anomalies have been observed when fish were exposed to malathion, according to studies. Diazinon is used on rice, fruit trees, sugarcane, corn, potatoes and horticultural plants.

NMFS had a Dec. 31, 2017, deadline for completing the consultations for these three pesticides, and was on track to meet this milestone and issue a biological opinion. Dow AgroSciences asked the agencies last April to derail the consultation process. Late last year, the Trump administration asked the courts to give agencies a two-year delay but complied with the 2017 deadline after Earthjustice and the fishermen and conservation groups it represents pushed back.

“Salmon have been waiting four decades for relief from toxic pesticides in many of our rivers,” said Glen Spain, Northwest regional director of the Pacific Coast Federation of Fishermen’s Associations. “The agencies should do their job.”

Since then and as a result of multiple lawsuits, the EPA started the process of consulting with NMFS to determine whether EPA’s pesticide registrations impacts endangered salmon and steelhead. The Fisheries Service delayed doing its part, which led to this lawsuit and court-ordered deadlines.

Pesticides have profound effects on Northwest salmon and are a serious factor in their decline. Now that the biological opinion has been released, fishermen and conservation groups want the EPA to move expeditiously to put the protective measures in place.

“Those of us who fight to protect and restore rivers and their critical fisheries are very pleased that the biological opinions were released,” said Sharon Selvaggio, of Northwest Center for Alternatives to Pesticides. “To protect salmon, we need to respond to what the science is showing us.”

Federal government inaction puts at risk billions of dollars and thousands of jobs. As recently as the late 1980s, salmon and steelhead fishing in Oregon, Washington, Idaho and Northern California brought in $1.25 billion to the regional economy and supported more than 62,000 family wage jobs, according to independent economic studies. Government studies from Washington, Oregon and California show the economic benefits of dwindling salmon have grown exponentially since then.

Salmon runs have declined because of dams, climate change, widespread habitat loss and pesticide runoff. Scientists have found that, even at low levels, pesticides can cause the abnormal sexual development of salmon and impair their swimming ability, growth, development, behavior and reproduction.

Earthjustice is handling the case on behalf of Northwest Center for Alternatives to Pesticides, Pacific Coast Federation of Fishermen’s Associations, and Institute for Fisheries Resources.