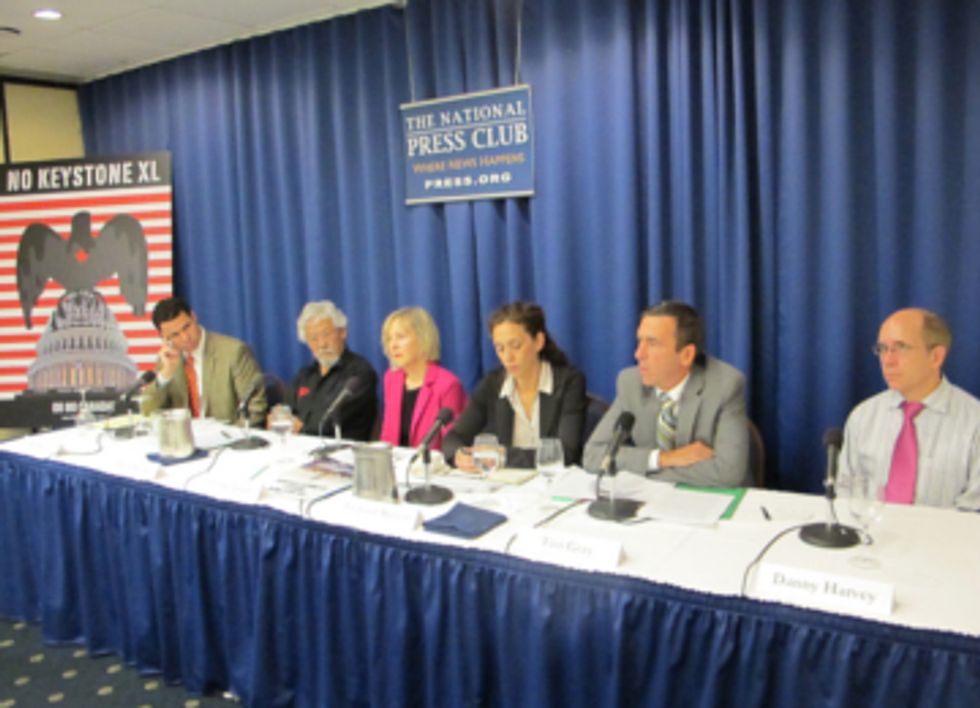 A delegation of Canadian scientists and activists participated in a briefing today at the National Press Club in Washington, DC, to set the record straight on the government’s strategy to undermine anything that might stand in the way of its goals to triple tar sands production, according to a Natural Resources Defense Council (NRDC) and Sierra Club press release.

As the Canadian government launches a $24 million pro-tar sands advertising campaign, Prime Minister Stephen Harper digs his heels in by saying he “won’t take no” for an answer on the Keystone XL pipeline.

“The Harper government will stop at nothing to ruthlessly promote tar sands expansion," said Tzeporah Berman, Canadian author and resource development activist, and panel member at today's briefing. "We have witnessed a steady erosion of rights and a concerted attack on critical environmental legislation, all as part of a plan to turn our economy towards tar sands. Democratic opposition is no longer tolerated in Stephen Harper’s Canada.”

At a breakfast briefing this morning, a delegation—featuring respected scientists, artists and activists—presented a compelling case to President Obama that Canada was unfit to make any sort of climate deal in exchange for the Keystone XL. The delegation described how the government’s tar sands obsession has cost Canada its international credibility, according to the NRDC.

“The Canadian government has failed to implement a plan to reduce carbon pollution," said Tim Gray, executive director of Environmental Defence Canada. "It is on track to miss both its own and international targets for carbon emissions reduction, yet is recklessly pursuing plans to triple tar sands production. To date, the government has shown no ability to act as a credible partner to the U.S. on climate actions.”

During the press event today, the delegation presented the following examples on how the Canadian government's concerted efforts cleared the path for reckless tar sands expansion:

“There is a systematic attack on science and democracy taking place in Canada, and the Harper government isn’t even trying to hide it," said scientist Dr. David Suzuki. "But scientists cannot and will not be silenced, not when we are facing an irreversible climate catastrophe like the tar sands.”

“Canadians’ right to free expression is being quietly eroded by a pro-oil government insistent on promoting tar sands and silencing anyone who might interfere with those plans," said panel member Franke James, a Canadian artist. "Rather than the friendly neighbor to the north, Canada has become the dirty old man.”

Plans to triple tar sands production by 2030 are incompatible with Canada and the U.S.’ shared commitment to keep global temperature changes below two degree Celsius.

“Under President Obama’s leadership, the U.S. is on track to meet our 2020 climate targets," said Bill Burton, of the League of Conservation Voters. "It would be counter-productive and counter-intuitive to implement strong climate policies at home, while giving Canada the go-ahead to develop its tar sands industry by approving Keystone XL.”