63 Dead, 631 Missing in Deadliest, Most Destructive Fire in California History 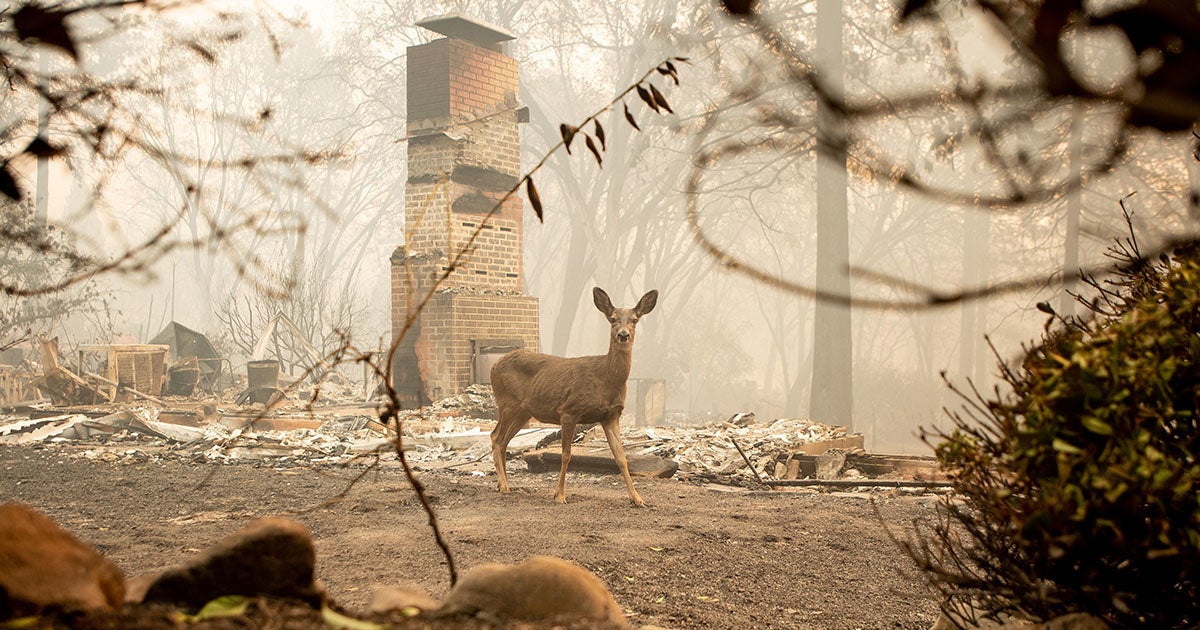 A deer stands in the remains of a home destroyed by the Camp Fire. JOSH EDELSON / AFP / Getty Images

The death toll from the catastrophic Camp Fire—by far the deadliest and most destructive fire in California history—has now risen to 63, with 631 people still unaccounted for, the Huffington Post reported Friday.

The Butte County Sheriff’s Office announced on Thursday that the death toll had risen from Wednesday’s figure of 56 after the remains of seven more people were discovered in the wreckage.

The number of missing made a big jump from the 130 people officials said were unaccounted for on Wednesday. Butte County Sheriff Kory Honea told reporters at a news briefing that the increase was a result of officials looking tirelessly through reports after Wednesday’s announcement, and many of the missing could be safely in shelters.

“The reason that that number went up is because after they went up, [emergency officials] didn’t stop working, they continued to work into the night,” Honea told reporters, according to The Huffington Post. “I’m fine with that update, because I would rather get that information out than wait too much longer to do that.”

Honea told people to check the list of those reported missing to make sure they aren’t on it.

The Camp Fire has burned more than 11,800 structures so far, including 9,700 homes. The destruction has displaced more than 52,000 people in an area already facing a housing shortage, The Sacramento Bee reported.

Here is the ⁦@ParadisePost⁩, the newspaper we can’t deliver, so we are dropping bundles off at evacuation centers. #CampFire pic.twitter.com/V8UnWNEZHG

Local officials told The Sacramento Bee that the fire could force migration comparable to what happened during the Dust Bowl during the 1930s, though on a smaller scale.

When asked if Butte County faced a humanitarian crisis, the executive director of the county’s housing office Ed Mayer said, “We’re on the edge.”

Mayer said that 6,000 to 7,000 households were likely to be permanently displaced by the fire. The county has the means to rehouse only 800 to 1,000 households permanently, and officials are overwhelmed when it comes to short-term options.

“We could make the choice to put them in temporary (shelters) to try to absorb those households for three to five years, meaning refugee camps and trying to keep our community together. That’s one choice,” Mayer said. “The other choice is we say, ‘We can’t do it, we don’t have the ability (to find shelters) and go fend for yourselves.'”

The Federal Emergency Management Agency (FEMA) said it did not yet have a plan to house the survivors of the fire, but the fact that President Donald Trump signed a major emergency declaration for the fire Monday means that federal funds can now flow towards recovery efforts.

“We don’t have a housing plan right this second,” FEMA spokeswoman Brandi Richard said Tuesday, according to The Sacramento Bee. “That’s something the state and local officials and FEMA teams are working on.”

The fire has now burned 141,000 acres and is 40 percent contained, according to the most recent Cal Fire update.

The dry, windy conditions that fanned the flames are expected to persist, though National Weather Service meteorologist Aviva Braun said there could be rain by the end of next week, the Huffington Post reported.