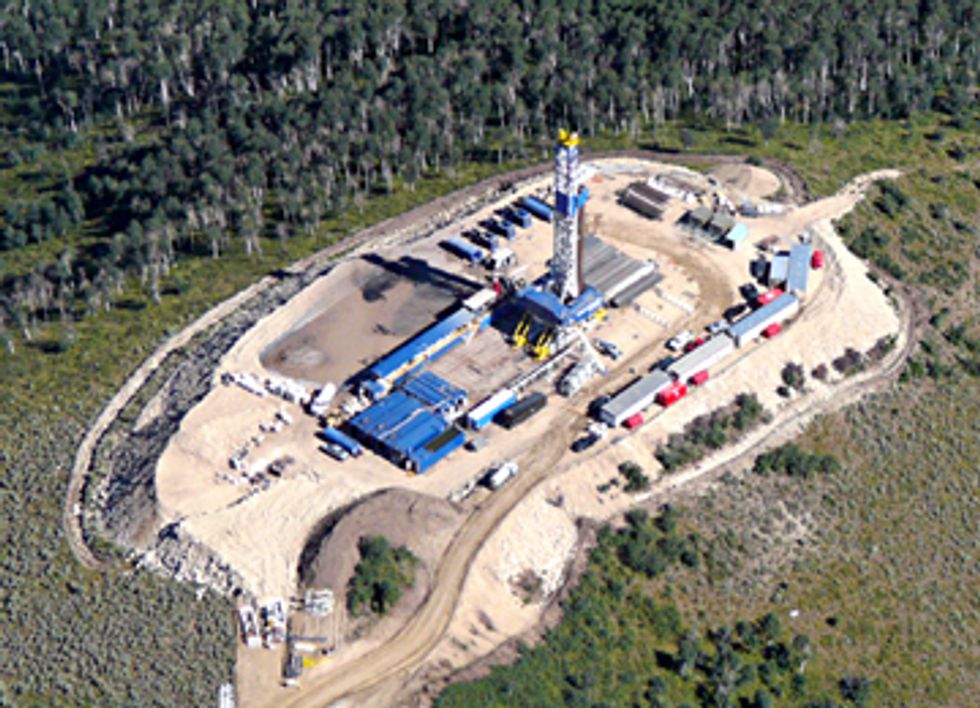 The U.S. Department of the Interior’s Bureau of Land Management (BLM) proposed an updated set of rules governing hydraulic fracturing, on public lands today. The controversial oil and gas development technique—in which drillers blast millions of gallons of chemically treated water into the earth to force oil and gas from underground deposits—has been linked to air and water pollution and public health problems.

“Comparing today’s rule governing fracking on public lands with the one proposed a year earlier, it is clear what happened: the Bureau of Land Management caved to the wealthy and powerful oil and gas industry and left the public to fend for itself," said Jessica Ennis, legislative representative at Earthjustice.

“Our public lands—and the people who live near them—deserve the highest level of protection. Today’s rule could have set the gold standard. Instead the BLM is settling for shoddy protections peddled by the oil and gas industry."

The updated proposal eliminates protections included in the version proposed last year and fails to include safeguards demanded by environmental and public health advocates.

Among the problems identified in the updated regulations:

• The proposed rules do not require an evaluation of the integrity of cement barriers in individual wells—the critical barrier between toxic fracking chemicals and groundwater—instead allowing oil and gas companies to test one well and allow those results to guide the development of other similar wells.

• The updated proposal does not require fracking companies to disclose chemicals before they are pumped into the ground—a critical measure that would give nearby communities time to test and monitor water supplies for any fracking-related water pollution.

“The Sierra Club is alarmed and disappointed by the fundamental inadequacy of the Bureau of Land Management’s new proposed fracking regulations," said Michael Brune, executive director of the Sierra Club. "After reviewing the draft rules, we believe the administration is putting the American public’s health and well-being at risk, while continuing to give polluters a free ride. The draft BLM rules ignore the recommendations of the president’s own shale gas advisory committee, which called for transparency, full public chemical disclosure, environmental safeguards, and pollution monitoring."

“Although no amount of regulation will make fracking acceptable, the proposed BLM rules fail even to take obvious steps to make it safer. This proposal does not require drillers to disclose all chemicals being used for fracking and continues to allow trade-secret exemptions for the oil and gas industry," said Brune.

Across the country, fracking has wrought widespread environmental damage—contaminating drinking water sources and turning treasured landscapes into industrial zones. And now, the oil and gas industry has designs on key areas of America’s natural heritage, including sources of drinking water for millions of Americans:

• White River National Forest–Located in Colorado, White River is the most visited national forest in the nation. Its pristine streams also provide drinking water to nearby communities, and feeds the Colorado River.

• Wayne National Forest–Part of the beautiful Hocking Hills region in Ohio, most of the acres in the forest are to be leased for drilling near the sole drinking water source for 70,000 people.

• George Washington National Forest–this area hosts streams in Virginia and West Virginia that feed the James and Potomac Rivers, which provide the drinking water for millions of people in the metro D.C. area.

• Otero Mesa–A vital part of New Mexico’s natural heritage, Otero Mesa is home to wildlife and what is perhaps the largest untapped freshwater aquifer in this parched Southwestern state.

“Today we were counting on Secretary Jewell to protect our natural heritage and environment from dirty drilling. She didn’t do it,” said John Rumpler, senior attorney for Environment America.

“Fracking is posing a staggering array of threats to our health and environment—especially to our drinking water,” Rumpler concluded. “If Secretary Jewell is not willing to confront these threats, then we urge President Obama to step in and protect our natural heritage—and our drinking water—from dirty drilling.”

Last year, tens of thousands of Americans submitted comments urging the administration to adopt a much stronger rule to curb damage from dirty drilling in or around our forest, parks and other treasured lands. Yet, the fracking rule proposed today is very limited and its provisions are exceedingly weak:

• Toxic chemicals: Instead of barring the use of toxic chemicals (including diesel), the BLM’s rule merely proposes disclosure of such chemicals, in a scheme even weaker than originally proposed last year.

• Well construction: The proposed rule falls short of even the American Petroleum Institute’s own standards for fracked wells.

"There is no requirement for baseline water testing and no setback requirements to govern how close to homes and schools drilling can happen. The new rules also continue to allow the use of toxic diesel fuel for fracking, as well as open pits for storing wastewater—two practices that we know to be environmentally hazardous," said Ennis.

“The oil and gas industry has gotten used to doing business in a dangerously irresponsible fashion for far too long. Even industry supporters say that oil and gas companies need to stop operating this way. Rather than supporting those calling for reforms, the BLM chose to bow to industry pressure and enable industry’s bad practices," said Ennis.

“If President Obama honestly wants to tackle climate change, then he must look for every opportunity to keep dirty fossil fuels in the ground and to double down on clean energy solutions like wind, solar and energy efficiency. The last thing we should be doing is opening up still more public land to drilling and fracking," said Brune.