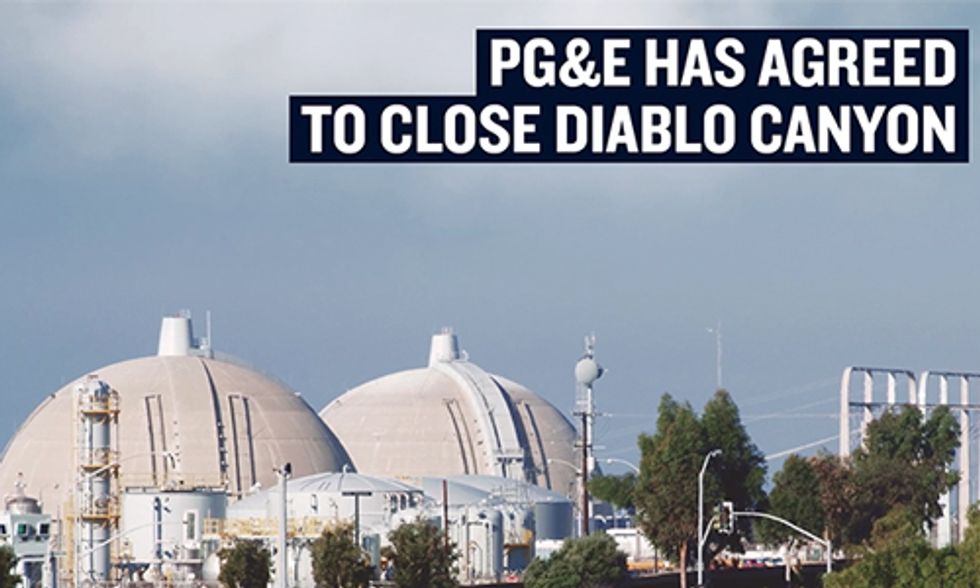 An historic agreement has been reached between Pacific Gas and Electric (PG&E), Friends of the Earth and other environmental and labor organizations to replace the Diablo Canyon nuclear reactors with greenhouse-gas-free renewable energy, efficiency and energy storage resources. Friends of the Earth says the agreement provides a clear blueprint for fighting climate change by replacing nuclear and fossil fuel energy with safe, clean, cost-competitive renewable energy.

The agreement, announced today in California, says that PG&E will renounce plans to seek renewed operating licenses for Diablo Canyon’s two reactors—the operating licenses for which expire in 2024 and 2025 respectively. In the intervening years, the parties will seek Public Utility Commission approval of the plan which will replace power from the plant with renewable energy, efficiency and energy storage resources. Base load power resources like Diablo Canyon are becoming increasingly burdensome as renewable energy resources ramp up. Flexible generation options and demand-response are the energy systems of the future.

By setting a certain end date for the reactors, the nuclear phase out plan provides for an orderly transition. In the agreement, PG&E commits to renewable energy providing 55 percent of its total retail power sales by 2031, voluntarily exceeding the California standard of 50 percent renewables by 2030.

"This is an historic agreement," Erich Pica, president of Friends of the Earth, said.

"It sets a date for the certain end of nuclear power in California and assures replacement with clean, safe, cost-competitive, renewable energy, energy efficiency and energy storage. It lays out an effective roadmap for a nuclear phase-out in the world's sixth largest economy, while assuring a green energy replacement plan to make California a global leader in fighting climate change."

A robust technical and economic report commissioned by Friends of the Earth served as a critical underpinning for the negotiations. The report, known as Plan B, provided a detailed analysis of how power from the Diablo Canyon reactors could be replaced with renewable, efficiency and energy storage resources which would be both less expensive and greenhouse gas free.

With the report in hand, Friends of the Earth’s Damon Moglen and Dave Freeman engaged in discussions with the utility about the phase-out plan for Diablo Canyon. The Natural Resources Defense Council was quickly invited to join. Subsequently, International Brotherhood of Electrical Workers Local 1245, Coalition of California Utility Employees, Environment California and Alliance for Nuclear Responsibility partnered in reaching the final agreement. The detailed phase out proposal will now go to the California Public Utility Commission for consideration. Friends of the Earth (and other NGO parties to the agreement) reserve the right to continue to monitor Diablo Canyon and, should there be safety concerns, challenge continued operation.

The agreement also contains provisions for the Diablo Canyon workforce and the community of San Luis Obispo.

“We are pleased that the parties considered the impact of this agreement on the plant employees and the nearby community,” Pica said. “The agreement provides funding necessary to ease the transition to a clean energy economy.”