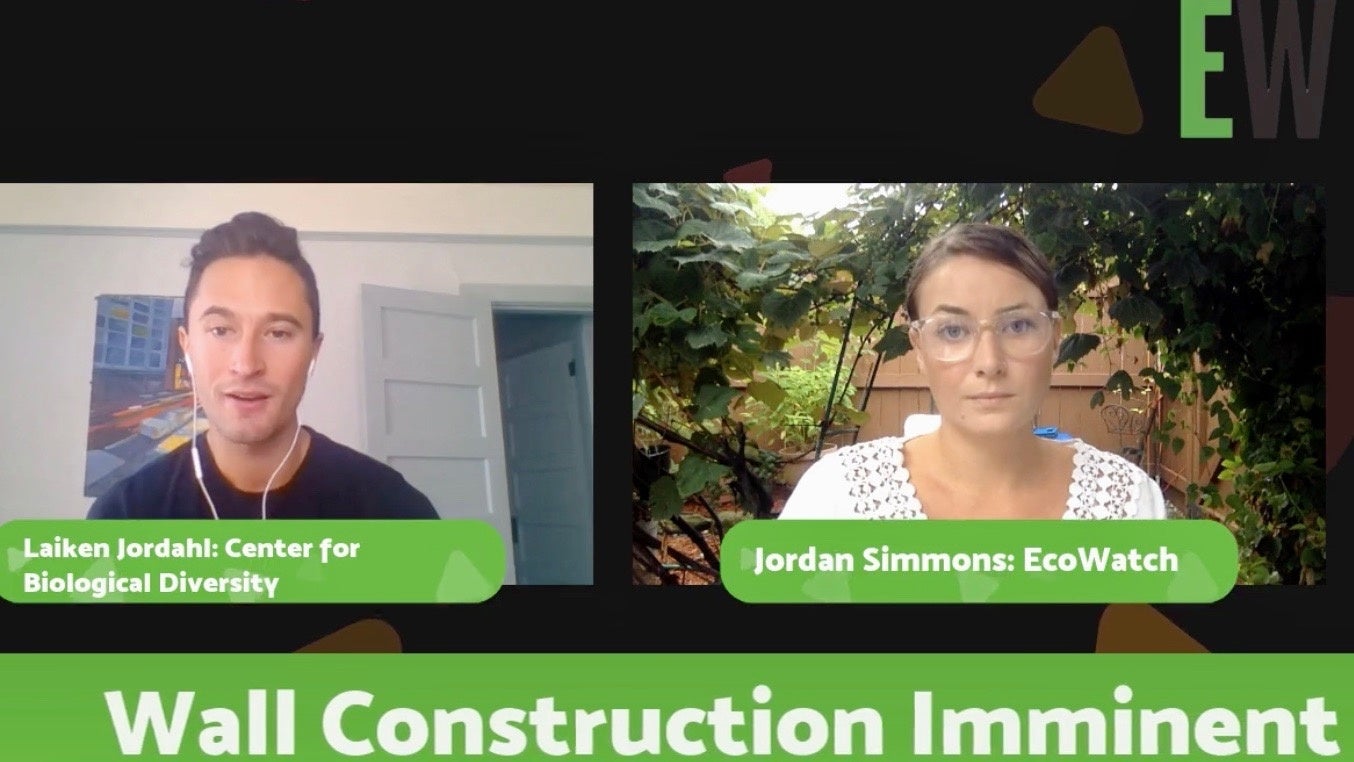 Last week we received positive news on the border wall’s imminent construction in an Arizona wildlife refuge. The Trump administration delayed construction of the wall through about 60 miles of federal wildlife preserves.

The win came shortly after the Center for Biological Diversity asked a federal judge to stop construction in 68 miles of the Arizona border via a filed injunction saying the government unlawfully ignored dozens of laws in place to protect wildlife habitat. The delay is set to last until October, leaving many environmentalists concerned this is only a temporary win. On Thursday EcoWatch teamed up with Center for Biological Diversity Borderlands Campaigner Laiken Jordahl via EcoWatch Live on Facebook to find out what we should expect to happen in the coming weeks and to gain clarity on the energy on the ground of our borderlands.

“This is an important win, but it’s so temporary and it’s important to stress that,” said Jordahl. “Bulldozers are already arriving on site in Organ Pipe Cactus National Monument on the San Pedro River in Arizona.”

To find out more about this specific monument and surrounding area, watch this video which is part of the Center for Biological Diversity series Border Views:

A temporary win means there is still a plan for bulldozers to tear through wildlife refuges in October. The department of homeland security will replace waist-high vehicle barriers currently in place with a “30 foot impenetrable wall, complete with night lighting and cameras on top,” said Jordahl. “It will have a profound impact on wildlife connectivity in ways that these vehicle barriers do not.”

Jordahl reiterated the importance of understanding the conservation aspects of vehicle barriers and how the border walls replacing them will have irreparable harm on wildlife — not only 93 endangered species at risk from the wall, but “virtually every single terrestrial animal [that will not be] able to cut across this impermeable barrier.”

[Read to find out 93 endangered species threatened by Trump’s wall.]

“We are proposing quite literally to ram a border wall through the heart of the best Sonoran Desert habitat anywhere in the world,” said Jordahl.

What can we do about it?

The Center for Biological Diversity recommends a “huge outpouring of support and advocacy,” and that EcoWatchers reach out to Congress stating that we want “legislative protection for these nature areas.”

According to Jordahl Republicans want to approve billion more for border walls which would wall off the rest of the U.S. Mexico border. Whether you are a Democrat or a Republican, please call Congress.

Border wall construction is already happening and underway in Organ Pipe. Currently the Center for Biological Diversity has a pending lawsuit, awaiting a decision by Sept. 4. If they lose and Trump is allowed to waive any and all environmental protections to rush wall construction, they expect ground to be broken in almost 60 miles: through the entirety of Organ Pipe Cactus National Monument, Cabeza Prieta National Wildlife Refuge and across San Pedro River which is the last free flowing river in the American Southwest.

Jordahl says the most important things anyone can do are to raise awareness, to share videos like this interview and to help the Center Biological Diversity to reframe the argument and discussion around the border.

“If politicians in DC and most of the American public knew the reality of the land here, the beauty of the land and how fragile these ecosystems are, there’s no way we’d be talking about ramming a medieval wall through some of these expansive and beautiful nature areas,” said Jordahl.

Another thing EcoWatchers can do, if able, is take a trip to the border to see the borderlands for themselves. Some places Jordahl recommends visiting are Organ Pipe in Arizona and Big Bend in Texas. Jordahl’s view of the borderlands is one with flourishing national treasures, diverse wildlife habitat where black bears and jaguars dwell in the same place, rugged spectacular landscapes and seven different units of the national parks service.