Black Sea’s Stunning Plankton Bloom Can Be Seen From Space 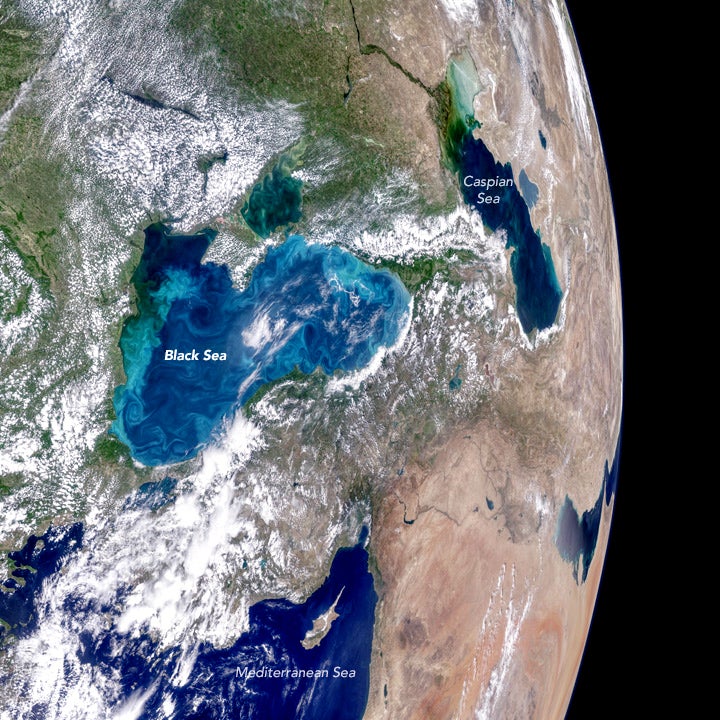 MODIS on NASA's Aqua satellite captured the data for this image of an ongoing phytoplankton bloom in the Black Sea. NASA/Jeff Schmaltz, LANCE/EOSDIS Rapid Response

The turquoise swirls of the Black Sea’s phytoplankton bloom can be seen all the way from space in a new image released by the Moderate Resolution Imaging Spectroradiometer (MODIS) on NASA‘s Aqua satellite.

“The May ramp-up in reflectivity in the Black Sea, with peak brightness in June, seems consistent with results from other years,” said NASA’s Goddard Space Flight Center ocean scientist Norman Kuring.

The May 29 image shown above is a mosaic comprised of multiple satellite passes over the region.

Kuring, who does not study this area, noted that this year’s bloom is one of the brightest since 2012.

According to NASA, the bright, milky swirls are caused by coccolithophores, a phytoplankton commonly found in the Black Sea. These microscopic plankton are plated with white calcium carbonate, and when aggregated in large numbers, these reflective plates are easily spotted from space.

These signature swirls are more commonly seen in the summer, but as Kuring explained, climate change could be altering the timing of phytoplankton blooms around the world.

Phytoplankton are microscopic marine organisms and an important food source for a wide range of sea creatures such as whales, shrimp, snails and jellyfish.

Phytoplankton make their own food from sunlight and dissolved nutrients but if too many nutrients are available, they can grow out of control and form harmful algal blooms. These blooms can lead to eutrophication—or dead zones—where low oxygen is lethal to marine life.