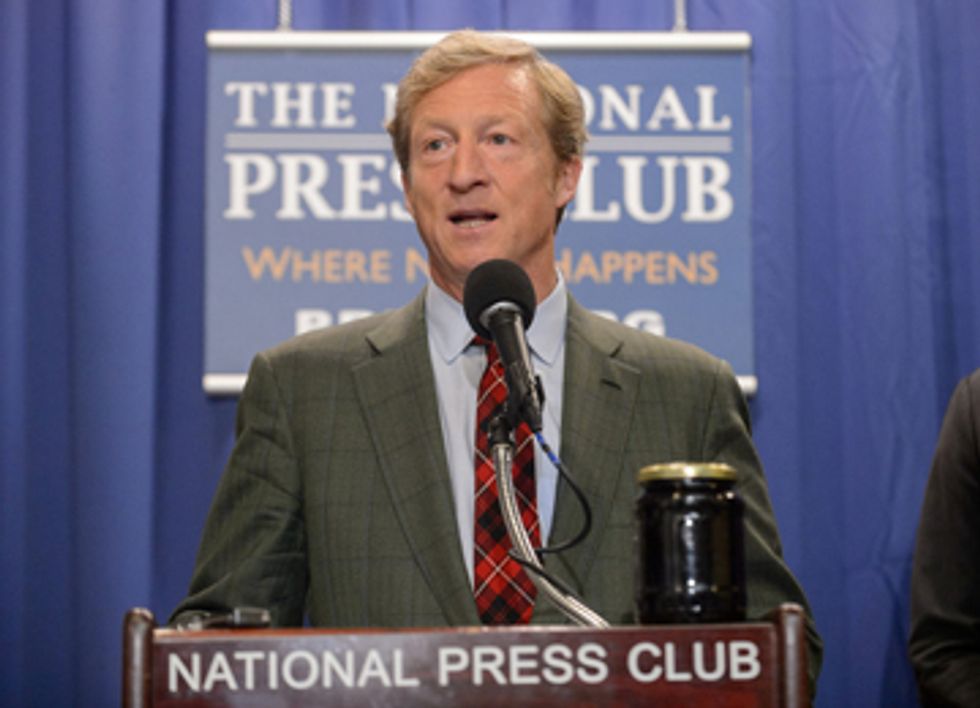 We Love Our Land

Tom Steyer announces the We Love Our Land campaign at the National Press Club in Washington, DC. A jar of tar sands oil sits on the podium. Photo credit: Samuel Hurd.

“President Obama is very smart. He understands our energy and climate crisis,” said Steyer. “The arguments for Keystone were a house of cards, and that house collapsed weeks ago when local Canadian government officials withdrew their support for a Keystone alternative coming across their lands. We want voters to know the pipeline doesn’t stand up against serious scrutiny. We’re betting that they can help the President make the right decision and reject Keystone.”

The digital campaign, which will run through next Labor Day, will use online petitions, videos and coordinated days of online action led by progressive bloggers who will be joining this effort, to rally the President’s core supporters across Facebook and Twitter.

To demonstrate the dangers of the Keystone pipeline to American communities along its proposed route, Steyer commissioned the first-ever chemical analysis of tar sands oil collected from the March 2013 spill in Mayflower, AR. An independent laboratory analysis conducted by Environmental Working Group found seven highly toxic substances: benzene, toluene, ethylbenzene, 1,2,4-trimethylbenzene, xylene, chromium and lead. Rev. Ron Stief of the United Church of Christ poured out a sample of the oil to give attendees an idea of what it might be like to have the thick, sticky noxious-smelling substance spilled in their community.

Rev. Ron Stief of the United Church of Christ pours out a sample of tar sands oil for press conference attendees. Photo courtesy of
Sierra Club.

Steyer also premiered a video featuring testimonials from the Mayflower community to highlight the health and environmental damage that spilled tar sands oil has caused to their community.

“We need to let Americans know how much damage pipelines like Keystone can have on our communities, on people’s health and our kids’ future,” said 28-year Mayflower resident Genevieve Long, who originally planned to participate in the event, but had to change plans due to ongoing medical appointments following the March oil spill. “The oil ran right through the middle of Mayflower, past the school and the senior center. It was thick, you could see the chunks of tar sands and it smelled awful. Who’s going to want to buy a contaminated property in our town now?”