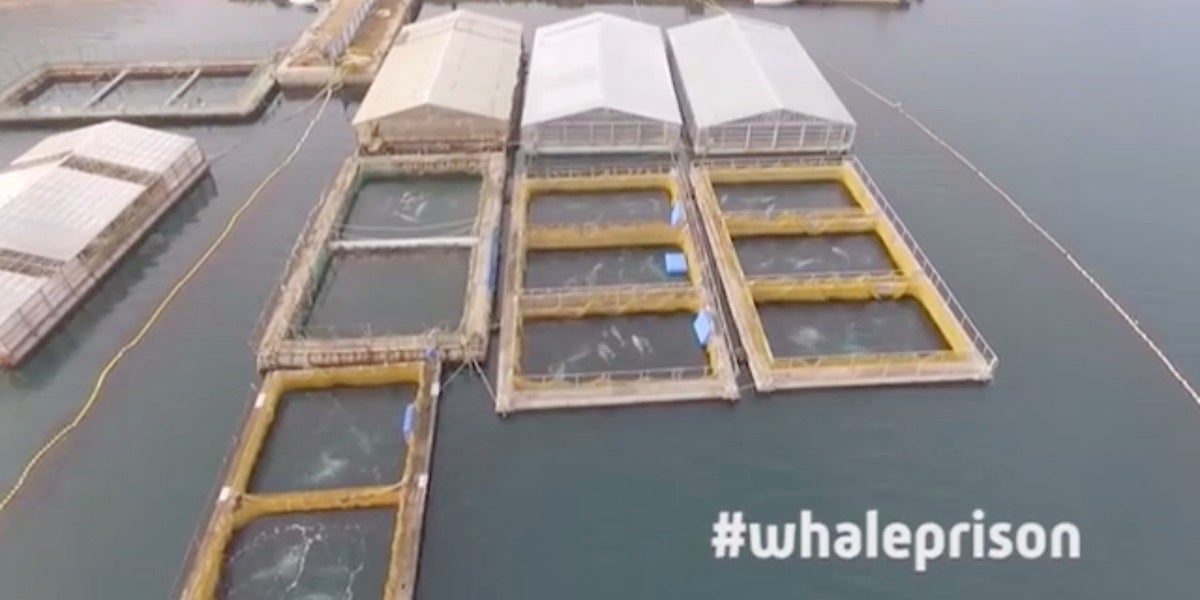 Ninety
belugas and 11 orcas are being held in tiny enclosures described by media reports as “whale jails” off Russia’s Pacific east coast.

An investigation has been launched at the site near city of Nakhodka, where some of the
whales have been contained since July, CBS News reported.

In the video below, a crane lifts a whale into an onshore tank in preparation for transport to an unknown destination.

It’s believed that the cetaceans will be sold to Chinese aquariums, despite the fact that it is illegal to capture wild whales except for scientific and educational purposes. Commercial whale hunting has been banned worldwide since 1982.

Killer whales can reportedly fetch up to $6 million at marine parks in China.

Citing Russian newspaper
Novaya Gazetta, The Telegraph reported that the four companies that are renting the enclosures exported 13 orcas to China between 2013 and 2016. The companies allegedly involved were given permission to capture 13 orcas in the wild.

A prosecutor is investigating whether the orcas and belugas were actually captured for scientific or educational purposes. The conditions of their confinement as well as the legality of their holding pens are also being examined, The Telegraph said.

“The holding pens … are not very large—I’d say no more than 30 to 40 feet on a side, and probably only about 10 to 20 feet deep,” Naomi Rose, a marine mammal scientist at the
Animal Welfare Institute, told The Dodo. “If they stay there through the winter, ice can form on the top of the water and they have to break through to breathe.”

Greenpeace Russia described the conditions as “torture” and said that capturing the marine mammals could threaten the species’ survival.

“Catching them at this tempo, we risk losing our entire orca population,” Greenpeace Russia research coordinator Oganes Targulyan said to The Telegraph. “The capture quota now is 13 animals a year, but no one is taking into account that at least one orca is killed for every one that is caught.”

The orca population in the nearby Kamchatka region has decreased so drastically that they were listed as
endangered this year.

“The trauma and distress these animals experience during captures is not opinion or emotion—it is fact,” Rose added to The Dodo. “They suffer intense stress-related reactions and their mortality risk spikes sharply soon after capture and then again after transport—they don’t get accustomed to the process. The decimated pods may experience similar stress and trauma—their offspring are being taken from them.”

With only 74 individuals remaining in the wild, time is running out to save Southern Resident orcas, but last week the Canadian government announced a slew of measures to help save the critically endangered species. Learn more, via @EcoWatch: https://t.co/ja65h7CLt6