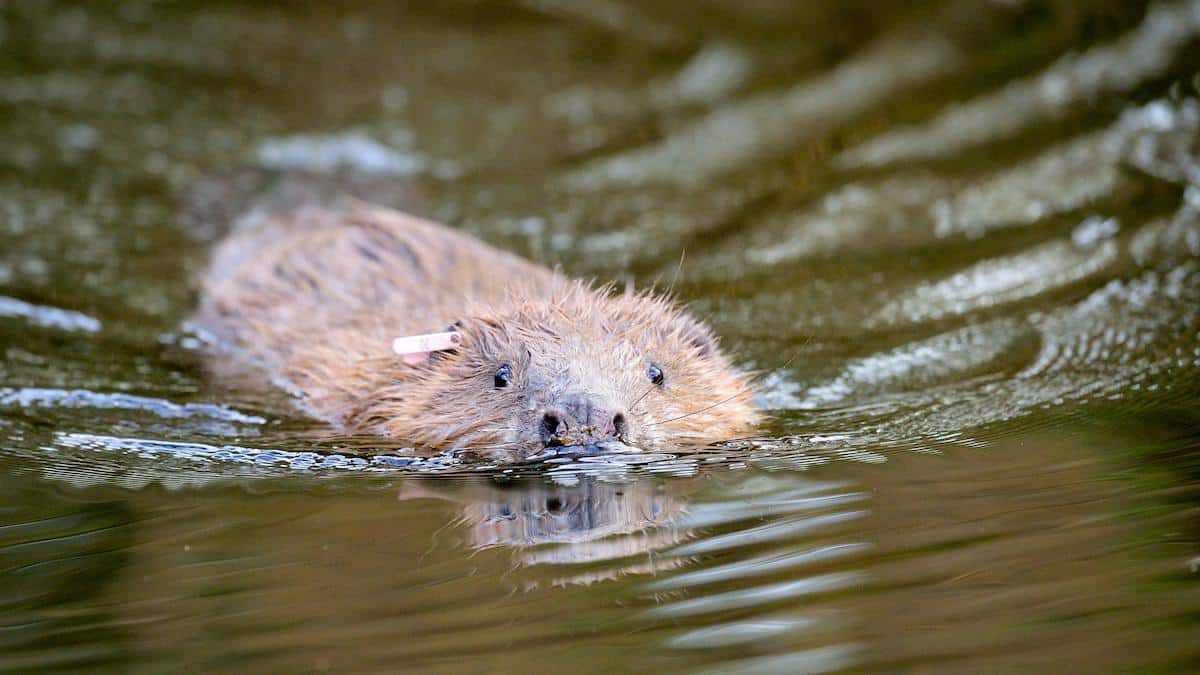 One of the beavers released into England's Somerset county this January, which has now helped build the area's first dam in more than 400 years. Ben Birchall / PA Images via Getty Images

The dam is the work of Eurasion beavers who were reintroduced to the National Trust‘s Holnicote Estate in Exmoor National Park at the start of 2020, The Independent reported Monday. The beavers began to build the small structure in October, and video cameras caught them gnawing on trees and gathering vegetation for the dam.

“It might look modest, but this beaver dam is incredibly special – it’s the first to appear on Exmoor for almost half a millennium and marks a step change in how we manage the landscape,” National Trust project manager Ben Eardley told BBC News. “What’s amazing is that it’s only been here a few weeks but has created an instant wetland.”

The beavers weren’t just re-released for the cute factor. These river-dwelling rodents are also a natural solution to the twin crises of climate change and biodiversity loss.

Beaver dams both hold water during droughts and help prevent flooding by slowing its flow downstream during wet periods, the National Trust explained. They also create pools that provide a habitat for other animals.

“We’ve already spotted kingfishers at the site, and over time, as the beavers extend their network of dams and pools, we should see increased opportunities for other wildlife, including amphibians, insects, bats and birds,” Eardley said in a National Trust update. “The recent rain we’ve had is a reminder of the significant role beavers can play in engineering the landscape. As we face the effects of climate change and more frequent extreme weather events, natural interventions like this need to be part of the solution.”

Rewilding Britain has also argued that beavers can provide habitat and wildlife corridors for animals forced to migrate as their range changes because of the climate crisis, The Guardian explained.

Beavers have also been touted as a climate solution outside the UK. Jen Vanderhoof of Washington State’s King County Department of Natural Resources and Parks has argued that beaver dams could help mitigate the climate-driven cycle of drought and flooding in the Pacific Northwest of the U.S., as well as help slow wildfires by acting as natural fire breaks.

However, the UK faces a special challenge in working with beavers, because the animals were hunted to extinction in the country in the sixteenth century, BBC News explained. They were sought after for their meat, water-resistant pelts and a substance called castoreum that they excrete, which was used in food, perfume and medicine.

Beavers have begun to be reintroduced into Britain beginning in the 2000s. The Exmoor beavers were brought over from wild populations along the River Tay in Scotland. Their introduction marks the first time in the National Trust’s 125-year history that it has reintroduced beavers to a river ecosystem. They were originally introduced into a 2.7 acre enclosure on the Holnicote Estate, according to The Guardian.

The beavers’ introduction is part of the National Trust’s £13 million project to restore the health of rivers and streams.

“Although we’re introducing a species that used to live here in the wild, this project is all around creating our landscapes of the future, helping us respond to the challenges the landscape and communities now face,” Eardley told the National Trust.

In a separate project, the UK government has completed a five-year trial of reintroducing beavers to the River Otter in Devon and is considering developing a national plan to reintroduce the animals, The Independent explained.