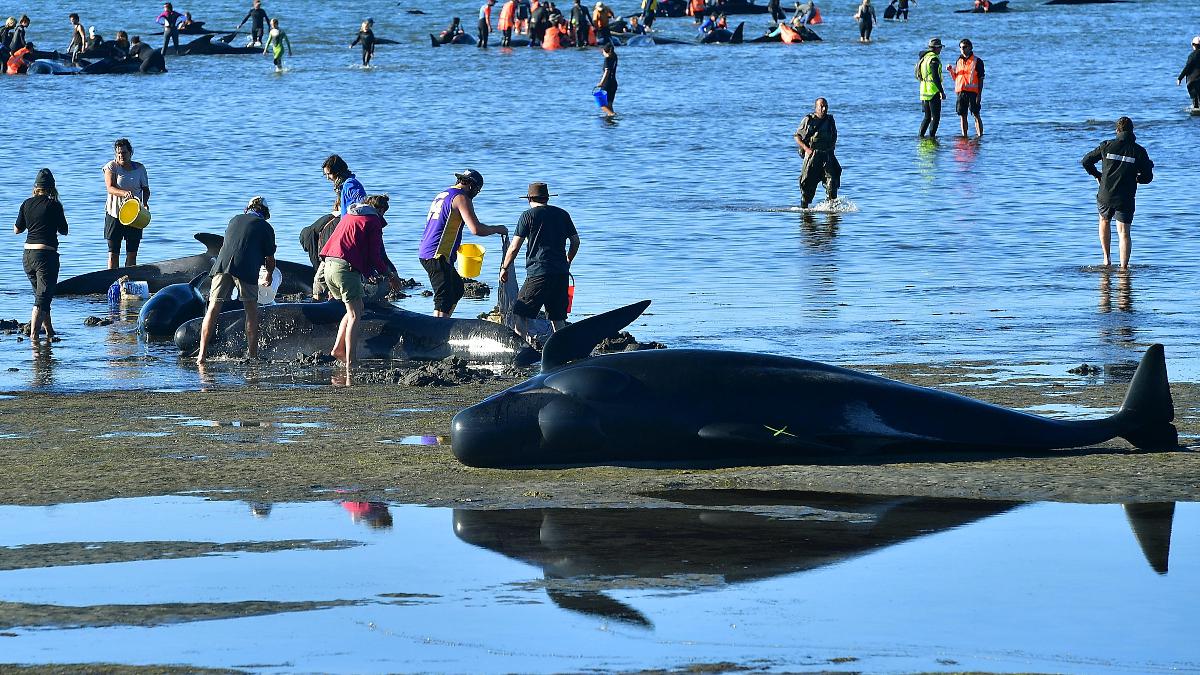 In a tireless, two-day effort, volunteers in New Zealand joined together to successfully refloat a pod of long-finned pilot whales stranded on the beach.

On Monday, the pod of 49 long-finned pilot whales was found stranded on Farewell Spit, a remote beach on the South Island, AP reported. In response, rangers from New Zealand’s Department of Conservation, volunteers from Project Jonah, a whale rescue group and local residents joined efforts to keep the whales alive and in deep waters, AP reported.

When first sighted, nine whales were already dead, but volunteers drenched the animals still alive with buckets of water and ensured the animals kept the pressure off of their fins throughout the day, Louisa Hawkes, a spokesperson for Project Jonah said, according to AP.

By late Monday, when the tide had risen, 150 people, most of them volunteers, formed a human chain and guided the whales back into deeper waters, Stuff reported.

Darren Foxwell, the Department of Conservation whale stranding operations manager, said the purpose of the human chain was so the whales could “re-orientate” and so the volunteers could “keep them together, otherwise there’s a risk of re-stranding if they take off on their own,” according to Stuff.

Once the whales were in deep enough water, boats moved back and forth to prevent the whales from swimming back to shore, AP reported. Yet despite these efforts, the whales still had not swum deep enough into the ocean for safety by the end of the day.

“It’s always fantastic to see whales out in deeper water where they should be,” Hawkes told AP. But the volunteers worried their efforts may not save the pod. “Everyone is very hopeful but also very realistic,” Hawkes added.

On Tuesday morning, the pod of whales was found stranded once again, Stuff reported. This time, only about 28 whales were alive and their chances at survival looked slim.

By that point the whales had become languid and were making little effort to swim away, a local Department of Conservation ranger, Andrew Lamason, told RNZ. With another dry tide on the horizon, volunteers were rocking the whales and attempting to direct them into the deep water.

By early Tuesday afternoon, the Department of Conservation reported that the pod had successfully swum offshore, following the formation of another human chain that pushed the animals deeper into the water, Stuff reported.

“Volunteers have been pulled out of the water now, because the whales are swimming below the low tide zone and heading out to sea,” Lamason told Stuff. “That’s really good news; such good news that I’m going home.”

This is not the first time New Zealand’s Farewell Spit has experienced whale strandings. Each year, about 300 whales and dolphins are stranded at the top of New Zealand’s South Island, BBC reported. In 2017, more than 400 pilot whales were stranded on the beach’s three-mile-long stretch.

This is partly due to the region’s unique geographical shape, creating a “natural trap” for long-finned pilot whales, BBC noted. Shaped like a hook, the spit’s geography causes a whale’s echolocation signal to bounce back, disorienting the animal into shallower and unsafe waters.

While scientists do not have a definite answer as to why whales and other animals consistently find themselves stranded on these shores, they do suspect it may also have something to do with changes in feeding patterns and altered ocean temperatures, especially in January and February, BBC reported.

The whale pod is now swimming offshore – their success credited to the efforts of volunteers and whale advocates alike, now relieved and heading home.

“I’m just doing what I can, it’s not something I’ve done before and it’s not how I hoped to see whales. I just hope we can help them live and survive,” one volunteer at Farewell Spit said, according to Stuff. “But as sad as it is, this kind of thing also brings people together,” another commented.

If you are able to support our rescue efforts with a one off donation, we'd really appreciate it. As a really small charity, last minute expenses take a big toll. You can donate using the link below: https://t.co/62eFHkdBwu pic.twitter.com/n47LI0iEkb