Why Do Whales and Dolphins Strand? 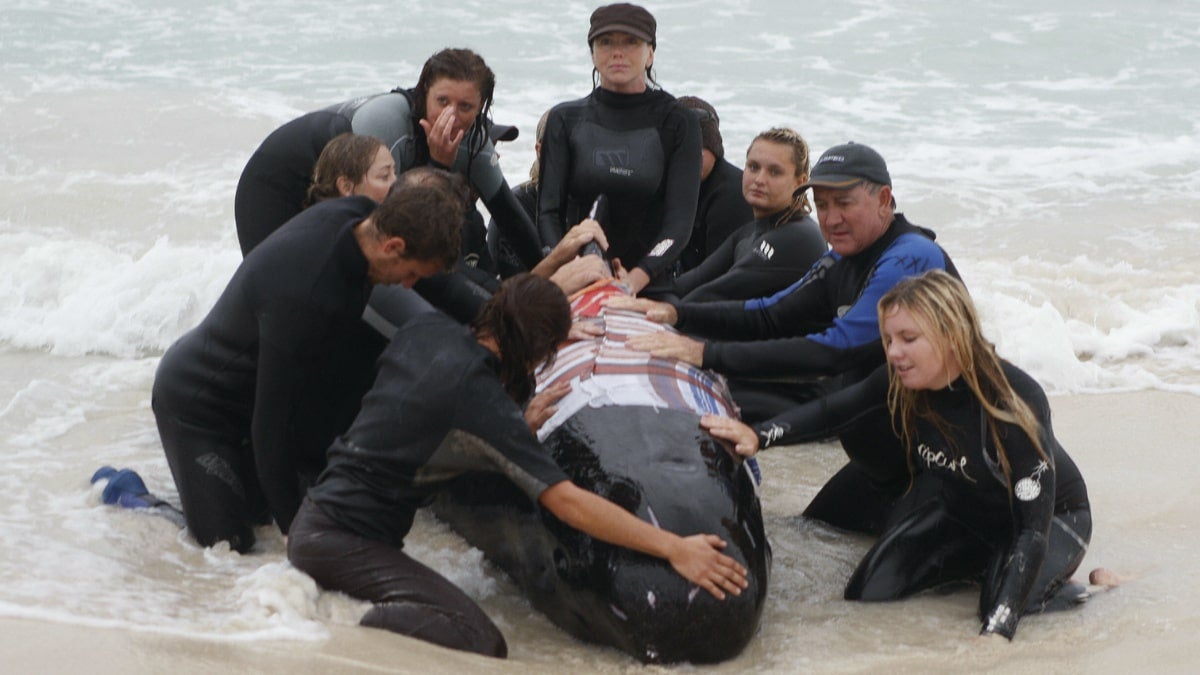 Pilot whales, sperm whales, beaked whales and deep-sea dolphins are the marine mammals most commonly involved in mass strandings. Baleen whales, on the other hand, a group to which all big whales except the sperm whale belong, strand very rarely.

If these mammals become stranded, they can dry out, overheat, suffocate or suffer severe inner injuries because of their enormous dead weight.

How Do Whales and Dolphins Navigate?

Like migratory birds, some whale species travel great distances every year. In winter, whales migrate from the cold northern seas to warmer waters in the south, and whales from southern waters move to the north in the same season. Months later, they then begin to travel back home.

The smaller toothed whales, such as dolphins, have a powerful underwater sonar. They orient themselves on their journeys by emitting sound waves in the form of clicking noises. When these sound waves collide with an object, they are reflected back as echoes to the animals’ ears, which in the case of whales are shielded from the skull in foam-filled chambers inside the body to enable spatial hearing. The faster the sound returns, the closer the prey, an obstacle or the coast.

However, in the case of the large baleen whales, which have horn plates (baleen) instead of teeth in their upper jaws for filtering krill, animal plankton and small fish from the water, this underwater sonar is not very highly developed.

This echolocation works very well as a rule. However, sound reflection does not function reliably in certain circumstances, particularly when there are shallow or semicircular bays, sandy underwater embankments or silt banks. These types of coasts and obstacles do not produce an unambiguous echo from any particular direction, so the warning system fails.

What Influence Does the Earth’s Magnetic Field Have?

Magnetite crystals have been found in the skulls of these animals. The whales could be confused by disturbances of the geomagnetic field near the coast. Magnetic fields running perpendicular to the mainland are also thought to play a role in mass strandings of whales in certain coastal regions.

Every few years, solar storms and sunspots that occur amid heightened activity on the sun’s surface also cause fairly large changes in the Earth’s magnetic field. It is at such times that sperm whales, for example, which also use geomagnetism as a natural navigation system, get lost and become stranded in the North Sea.

Why Do Whales and Dolphins Become Stranded?

Navigational errors are thus believed to be the main cause of whale strandings, but all the reasons have not yet been conclusively investigated.

One of them is certainly the social behavior of many whale species, which travel in groups, so-called pods, and are guided by a leader. For example, in the case of sperm whales, a male leads the way from the Arctic Ocean back into warmer waters. By contrast, when orcas are on their travels, a mother or grandmother leads the group.

If leaders lose their orientation, perhaps because they are confused or because parasites have attacked their ears, rendering them incapable of hearing the echoes of the clicking sounds that have been sent, the accompanying animals will follow them in the wrong direction. If a leader is stuck in shallow waters, the rest of the group stays with it, even if this means their certain doom.

Sometimes, as has been observed, for example, with orcas on the South African coast, this group cohesion can go so far that whales who have already been saved after a mass stranding return to the beach if another stranded whale calls for help.

But strandings can also have other natural causes. Sometimes, smaller dolphins become beached because they have taken refuge from orcas and other predators in shallower waters or because they have ventured too far into shallow areas when hunting shoals of fish.

Occasionally, individual animals are also washed ashore dead after being previously injured by collisions with ships, fishing nets or shark attacks or becoming ill from infections or parasite infestation.

Which Human Influences Exacerbate the Situation?

In addition to natural factors, man-made underwater noise from ships, icebreakers, drilling platforms or military sonar equipment can also massively impair the orientation and communication of marine mammals. They flee the strong sound waves in a state of confusion. And since the density of water is much higher than that of air, sound propagates underwater about five times faster than in the air.

Military sonar operations employing very loud sounds have particularly drastic effects. After NATO maneuvers, for example, beaked whales have washed up dead on the coasts of Cyprus, the Canary Islands and the Bahamas. The sonars, which are louder than 200 decibels, triggered the formation of gas bubbles in the blood vessels and organs of marine mammals (as happens with diving sickness), obstructing the blood supply and leading to their death.

How Can You Help Stranded Whales and Dolphins?

When a whale stranding is discovered, there is usually not much time left. Teams of helpers can do little more than try to cool the stranded animals, keep them moist and combine forces to get the heavy animals back into the sea as quickly and gently as possible.

In some countries, hotlines have been set up so that as many helpers as possible can be mobilized quickly. For many exhausted animals, however, even these immediate measures often come too late.