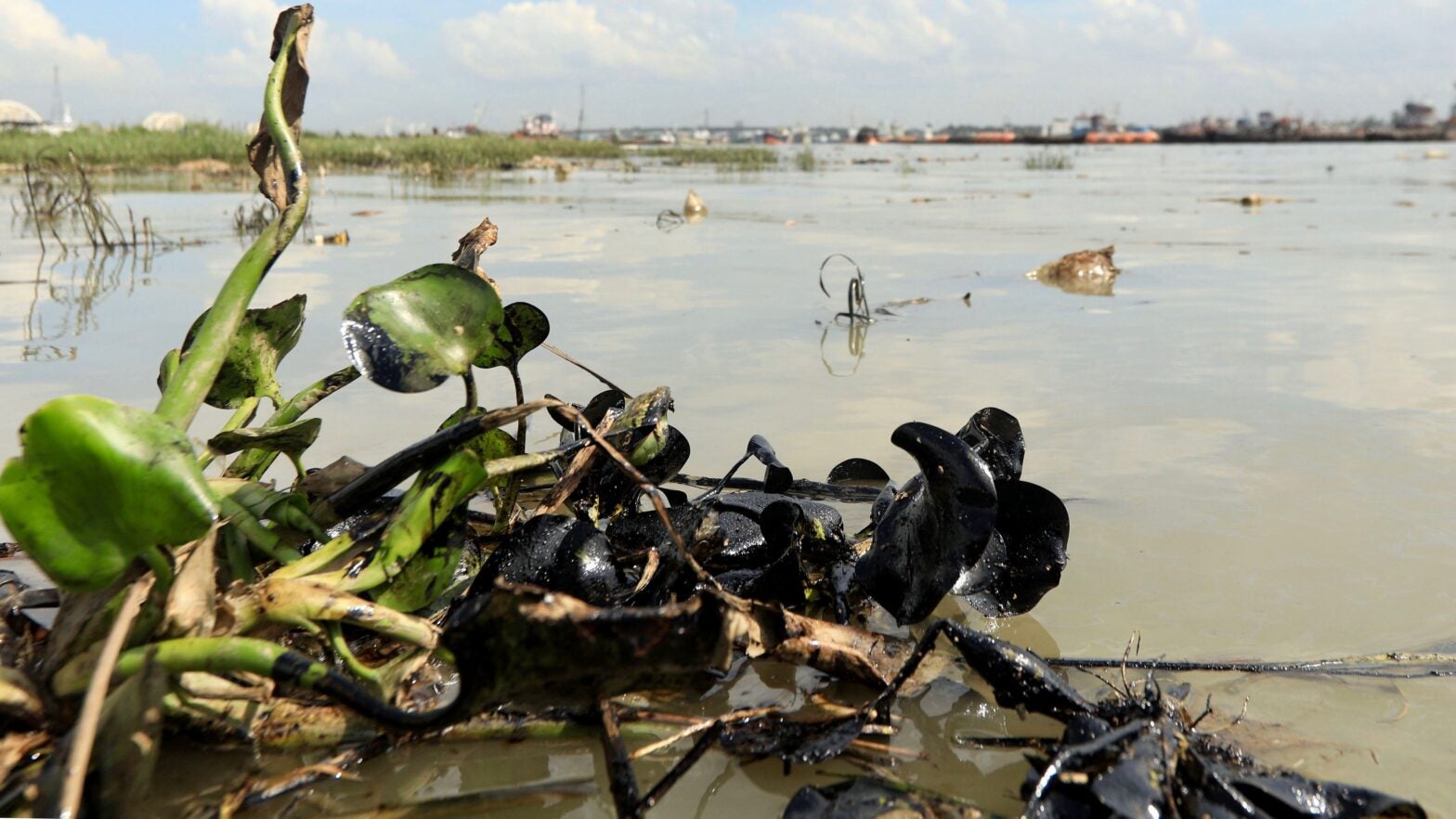 In this photo taken Oct. 26 vegetation is covered in oil after diesel spilled into the Karnaphuli River following a collision of two tankers at Padma jetty in Chittagong. The oil spread about 16 kilometers during high tides and low tides in the river, posing serious threat to the local biodiversity, especially the Ganges river dolphins breeding ground. STR / AFP / Getty Images

Ganges River dolphins are in crisis after a tanker carrying 1,200 tonnes of diesel collided with another ship on the Karnaphuli river near Chittagong port, #Bangladesh Friday and spilled tonnes of fuel. https://t.co/DMMmaIN8ii

A tanker carrying 1,200 tonnes of diesel collided with another ship in the Karnaphuli river near Chittagong port last week, spreading 10 tonnes of diesel across 16 kilometers, port authority spokesman Omar Faruk told the publication. The Department of Energy issued a fine for polluting the environment, reported local media agency Dhaka Tribune. The Marine Bulletin reports that as of Oct. 26 about eight tonnes have been collected.

Around 60 Ganges river dolphins (Platanista gangetica gangetica) use the area as a breeding ground and could inhale toxic petroleum vapors when surfacing to breathe. At least 20 dolphins in the last four years have died of unnatural causes including pollution in the river and in the adjacent Halda river, reports AFP.

The Ganges river dolphin is one of just three freshwater dolphins in the world and is unique to two river systems in India, Nepal and Bangladesh. A 2014 study found that their population has dwindled dramatically since their 4,000 to 5,000 population in the 1980s. Today, the total population is around 2,000 individuals, according to the International Union for Conservation of Nature. Declared by the government of India as a National Aquatic Animal in 2009, the World Wildlife Fund notes that the species is a key indication of ecosystem health but are largely endangered due to human activities.

Ganges river dolphin habitat is one of the most densely populated areas in the world and is used for fishing. Individuals are often caught as bycatch after becoming tangled in fishing nets used for shrimp and fish. They are also hunted for meat and oil, which is both used medicinally and to attract catfish for fisheries.

One of the biggest threats to the Ganges river dolphin is pollution. The WWF reports that the essentially blind cetaceans have likely lost a majority of their eyesight due to pollution in their home waters.

“Pollution levels are a problem, and are expected to increase with the development of intensive modern industrial practices in the region,” wrote the organization. “Compounds such as organochlorine and butyltin found in the tissues of Ganges River dolphins are a cause for concern about their potential effects on the subspecies.”

In addition to oil spills, industrial and agricultural runoff seeps into their marine ecosystem with an annual input of more than 8,000 tonnes of pesticides and nearly 5.4 million tonnes of fertilizers that are used in their region, according to WWF. A 2016 report outlined the threat from “unabated dumping of toxic industrial and household waste,” reported the Dhaka Tribune at the time.