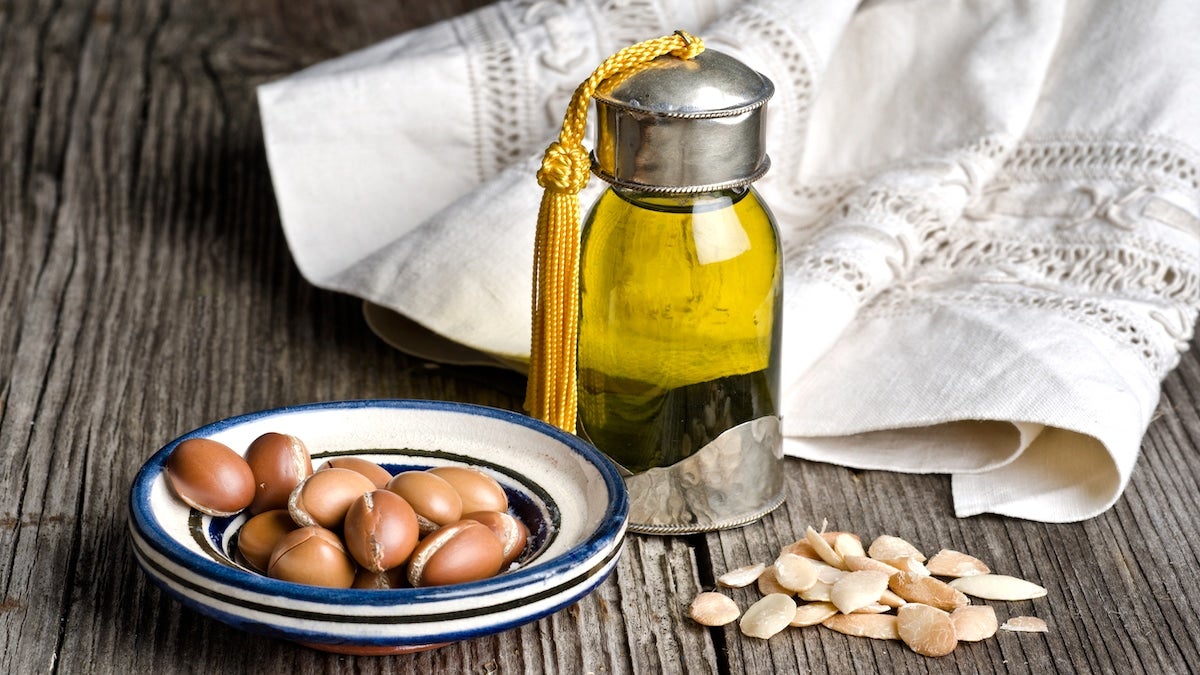 Argan oil has a wide variety of uses. luisapuccini / iStock / Getty Images Plus

Argan oil is a plant oil produced from the fruit of the argan tree (Argania spinosa L.) that originates in Morocco. The oil has been used around the world for cosmetic, culinary and medicinal applications for centuries. Favored for its nutty and subtle flavor, you’ll also be impressed by these five health benefits.

The phenolic compounds found in argan oil include tocopherol (vitamin E) and other antioxidant agents like plant sterols, melatonin and coenzyme Q10 (CoQ10). These compounds work to reduce the damage caused by free radical and oxidative stress. Free radicals are unstable molecules the body makes in response to harmful environmental factors like radiation or tobacco smoke. Over time, free radicals can cause damage to the body and lead to chronic conditions such as cardiovascular disease.

One study demonstrated a significant decrease in inflammatory markers in mice that were fed argan oil before exposure to a liver toxin, compared to the control group. Researchers noted that argan oil could protect against acute liver injury. The study was published in the International Journal of Molecular Science in 2017.

A 2020 study noted that sustained consumption of argan oil could reduce the burden of degenerative diseases linked with “higher inflammatory status,” though it was not considered pharmacological in efficacy. The study was published in the International Journal of Food Sciences and Nutrition.

Argan oil is an excellent source of monounsaturated fat in the form of oleic acid, known for its cardioprotective effects. Oleic acid is also present in other healthy fat oils like olive oil and avocado oil.

Interestingly, a few small studies conducted on human participants showed beneficial effects related to cholesterol and heart disease risk. For example, an older interventional study included 60 young male participants who followed a controlled diet for two weeks and then received 25 grams of butter daily. The group was later randomized into two group periods of three weeks each. Researchers found that argan oil containing antioxidants and monounsaturated and polyunsaturated fats could play a beneficial role in cardiovascular prevention, according to the study published in Nutrition, Metabolism & Cardiovascular Diseases.

A 2011 study analyzed heart disease risk in 40 healthy people who took 15 grams of argan oil daily for 30 days. Participants had a 16% reduction in LDL levels and 20% in triglyceride levels, according to the research published in the British Journal of Nutrition.

A 2019 study published in Nutrition investigated the effects of argan oil and fish oil on a few risk factors for cardiovascular disease in rats, such as dyslipidemia, oxidative stress and platelet aggregation. Supplementing with both oils yielded reduced platelet hyperactivity encouraged by a high-fat diet. Argan oil presented more of an antioxidant effect in the tissues and platelets than fish oil.

Argan oil could slow the growth and reproduction rate of some cancer cells, though the research is still in preliminary stages.

An older test-tube study used argan oil extract on prostate cancer cells. The extract inhibited the growth of cancer cells by 50% when compared to the control group, according to an older study published in Cancer Detection and Prevention.

Another test-tube study took a pharmaceutical-grade mixture of argan oil and vitamin E and applied it to breast and colon cancer cells. The study found the mixture increased the rate of cell death in these cancer cells. The results were published in the Journal of Biomedical Nanotechnology in 2012.

Argan oil is a popular ingredient in many cosmetic and medicinal skin and hair care products. A 2018 review published in the International Journal of Molecular Science found that:

Researchers found that these results are possible due to argan oil’s antioxidative activities, anti-inflammatory properties and anti-microbial properties. Furthermore, argan oil may slow the aging process by reducing inflammation and oxidative stress.

Plant oils like argan oil have the potential to externally and internally benefit certain health concerns, especially accounting for its phenolic compounds and beneficial fat content.