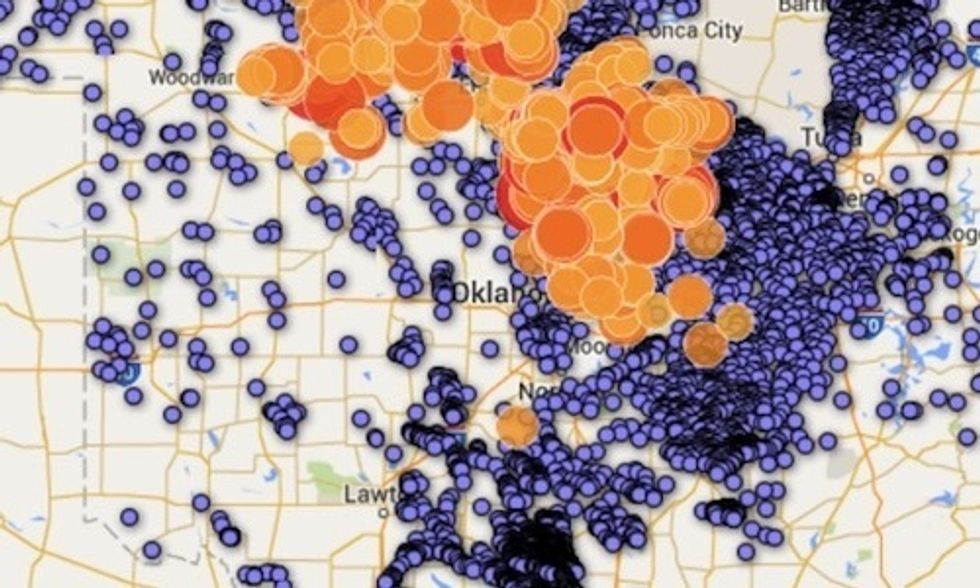 Officials in frack-happy Oklahoma are continuing to express concern over the state's alarming earthquake boom. If a strong one strikes the northwestern city of Cushing—one of the largest crude oil storage facilities in North America, if not the world—it could disrupt the U.S. energy market and become a national security threat, NPR reports.

Mike Moeller, senior director of mid-continent assets for Unbridle Energy, explained to NPR that, so far, the state's uptick in tremors have not affected company operations.

However, Moeller noted that the company's 18 tanks, which hold between 350,000 to 575,000 of oil, are not built to withstand serious earthquakes, especially since earthquakes used to be so rare in Oklahoma.

As EcoWatch reported in September, before 2009 Oklahoma had two earthquakes a year, but now there are two per day. Oklahoma has more earthquakes than anywhere else in the world, a spokesperson from the Oklahoma Corporation Commission said earlier this month.

The possibility of a Big One striking Cushing, which holds an estimated 54 million barrels of oil, could be a national security issue.

"I have had conversations with Homeland Security. They're concerned about the tanks mostly," Daniel McNamara, a U.S. Geological Survey Research geophysicist, told NPR. He added that the faults underneath Cushing could be prime for more shaking.

Scientists have linked the Sooner State’s spike in seismic activity to the country’s oil and gas boom. It's believed that the injection of wastewater byproducts into deep underground disposal wells from fracking operations are putting pressure on faults and triggering the earthquakes.

In response, the Oklahoma Corporation Commission (which oversees the state's oil and gas industry) has been prompted to make changes to hundreds of disposal wells around the state, including the shutdown of several wells near Cushing.

However, NPR noted that the seismic activity near the oil hub resumed when the wells came back online. Oklahoma has about 4,500 disposal wells with about 3,500 still in operation, suggesting that the near-daily earthquakes are far from over unless some major changes are made.

Incidentally, a 4.7 magnitude earthquake was felt in the city of Medford this morning at 3:49 a.m.

The 4.5 magnitude quake felt in Medford was the largest felt in Oklahoma this week.
Photo credit: Earthquaketrack.com

According to Tusla World, Monday's temblor was the state's strongest since a 4.7 magnitude earthquake struck northern Oklahoma just two weeks ago. That quake was the strongest earthquake since 2011 and was felt in seven other states.

Oklahoma residents and even residents from neighboring states took to Twitter to share how this morning's Medford earthquake has rattled both their homes and their nerves.

Got a report on Facebook of the quake being felt all the way to St. Joseph, Missouri! #okquake
— Jon Haverfield (@Jon Haverfield)1448879514.0