And the World's Greenest Car Is ... 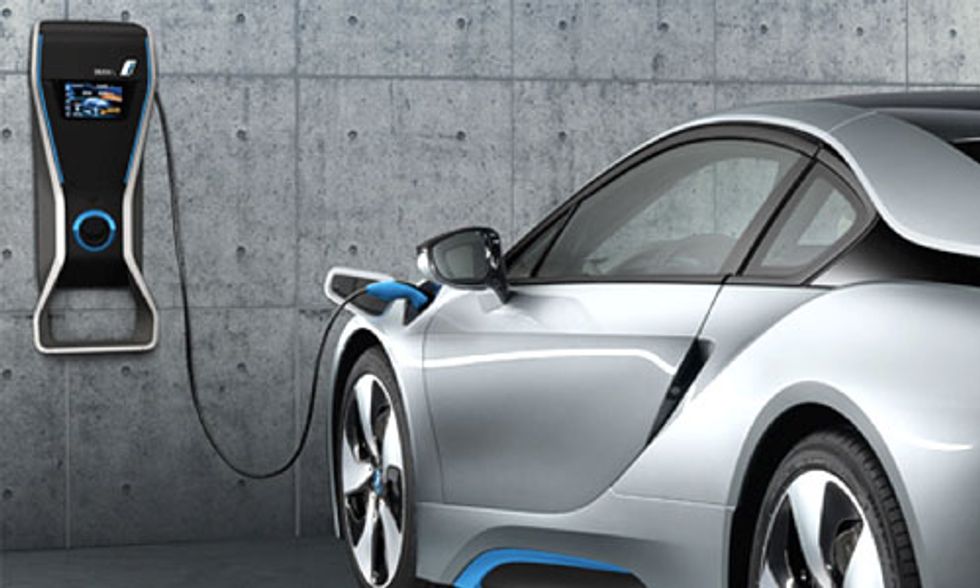 There's a reason why this plug-in hybrid is described as "the most progressive sports car." The BMW i8 was presented with the 2015 World Green Car Award at the New York International Auto Show, repeating the automaker's win last year with their purely electric BMW i3.

The BMW i8 has been presented with this year's World Green Car Award. The futuristic sports car is the first plug-in hybrid vehicle manufactured by the German automaker. Photo Credit: BMW

The international jury recognized the car for its plug-in hybrid drive technology, its lightweight construction as well as its avant-garde design.

With its scissor doors, low ground clearance and (optional) laser headlights, the i8 is every bit the futuristic Hot Wheel. The car claims to go from 0 to 60 in about 4.5 seconds, achieves more than 56 mpg for everyday commuting when the battery is fully charged and has an overall fuel consumption that's about 50 percent better than conventionally powered sports cars.

At a starting price of $135,700, the luxury vehicle is not for everyone. To satisfy the eco-minded driver, the i8's battery can be charged at a conventional power outlet, at a charging station or while driving.

The car has three different driving modes: its default setting will determine the most efficient balance between fuel and electric power; sport mode combines fuel and power for the best performance; and its eDrive mode goes on electric power alone for up to 22 miles. Chris Knapman of the UK's Telegraph Cars noted in a review that when driving the car with battery power exclusively, the i8 releases 49g/km (about 0.17lbs/m) in CO2 emissions. "Despite all of its technology, the i8 is as user-friendly as a Toyota Prius," Knapman noted.

The i8 can be charged with a BMW i Wallbox Pure or Pro, which can be mounted on the house or garage wall. With the Wallbox Pro, the BMW i8 can be charged to 80 percent of its full capacity in less than two hours. Photo Credit: BMW

According to a press release, to qualify for the World Green Car Award, the vehicle had to be all-new or substantially revised and at least 10 units had to be sold or leased in a major market between Jan. 1, 2014 and May 31, 2015. Also taken into consideration were tailpipe emissions, fuel consumption and use of a major advanced power plant technology aimed specifically at increasing the vehicle's environmental responsibility.

Because of the complex nature of "green" technologies, five experts from around the world were tasked with extensively reviewing all documentation and specs with each green car award candidate. Seventy-five World Car Awards jurors then voted for the best green car based on the experts' recommendations.

"The BMW i8 gasoline hybrid looks so cool, it should be the icon for all 'green' cars," one of the experts said of the machine. "The i8 adds so much enjoyment to a sensible lifestyle that it needs to be recognized as a great green car."

The BMW i8 was chosen from an initial entry list of 10 new vehicles from all over the world. A short list of this year's finalists also included the Mercedes-Benz S 500 Plug-In Hybrid and the Volkswagen Golf GTE.

“I am delighted to accept this award on behalf of the team in Munich," said Dr. Ian Robertson, head of Sales and Marketing and member of the Board of Management at BMW. “The BMW i8 represents the future with its unique lightweight construction and unrivaled connectivity. To win this award for the second year in a row shows that our BMW products are truly leading the world.”

Check out how this modern yet sustainable sports car moves: