An Island Divided: What We Must Learn From the Tragedy of Hispaniola 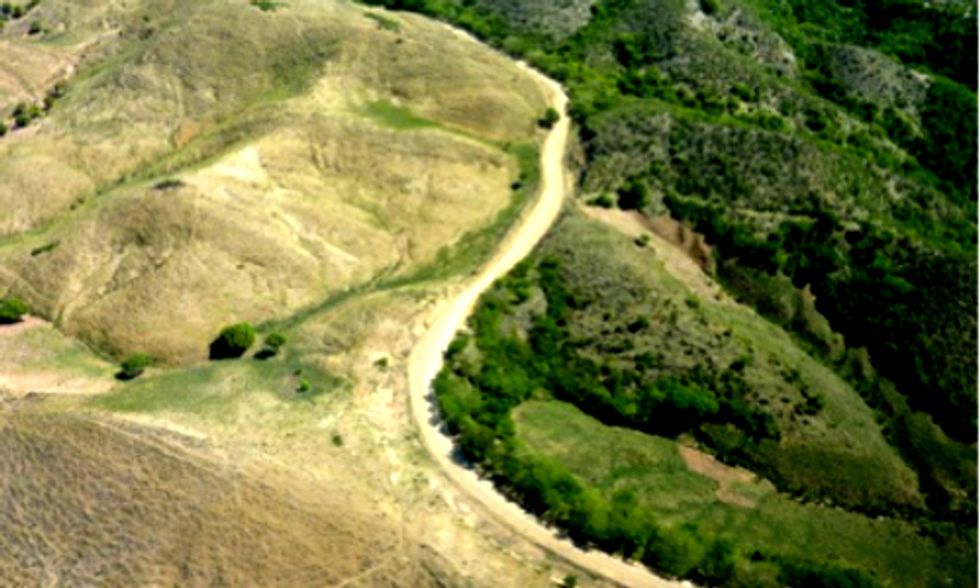 My last image of Haiti: a faded guard tower standing amidst a dry and desolate landscape, blocking the way to green mountains beyond.

Traveling over roads that were nothing more than rutted ditches and dried creek beds, we were heading for the Haitian border. Our plans to fly out of Port-au-Prince that morning had been derailed by news that Aristide, Haiti’s former ruler, had decided to return from exile. Hoping to avoid election turmoil and possible violence in the Haitian capital, we decided to attempt a dusty, daring escape out through the Dominican Republic (DR) instead.

I had witnessed desperation in Haiti: arid soils, food scarcity, disease, malnutrition and polluted drinking water. However, driving into the forested mountains of the DR, I finally realized what Haiti had truly lost. It had lost its green: the green of life, the green that meant water and food and hope.

Satellite image of the Haitian/Dominican border.

In the late 1600s, France took over the western part of the island of Hispaniola from Spain, dividing the island into what is now Haiti and the DR. Like a science experiment gone wrong, the border now demarks not only linguistic differences, but also an entirely different quality of life. In 1960, both countries experienced essentially the same rainfall patterns and enjoyed the same geography, availability of natural resources and land productivity. The countries had nearly the same per capita real GDP.

However, by 2005, the DR’s per capita real GDP had increased threefold, while Haiti’s had plummeted. Now, the average person in the DR can expect to live a full 10 years longer than their neighbor in Haiti. The percentage of the population below the minimum level of dietary energy consumption is 44.5 percent in Haiti, compared to 15.4 percent in the DR. The probability of dying under the age of 5 per 1,000 births in Haiti is 76, while in DR, the number is less than half of that. The DR has become a magnet for tourism, while Haiti has become a social, political and economic tragedy. What happened?

In 1950, forest clearing for plantations and wood exports in Haiti had largely ended, but wood harvesting for charcoal continued. A mere 30 years later, forest cover had diminished from 25 percent of the total land area to a meager 10 percent. It decreased again to 4 percent of the land by 1994.

Across the border, the DR initially suffered from deforestation as well. Tree cover plummeted from 75 percent of the land in 1922 to 12 percent by the 1980s. However, massive reforestation programs and a conscious shift to alternative energy sources (besides charcoal) allowed the trees to rebound. The nation established 13 national parks and restricted access to important forest reserves. Today, forest covers 28 percent of the country.

So what was the connection between the dying children I held in my arms in Hinche, Haiti and dusty landscape that they lived in? What was the relationship between the tropical forest and the avocados in the fruit markets of the DR? Why would I leave one country in tears, and the other with memories of bachata music and Corona beer? The answer is simple: trees bring life.

Forests prevent soil erosion. Sturdy trunks slow winds. Roots hold the soil in place and improve soil permeability. They allow water to percolate into underground aquifers, decreasing surface water runoff. Leaves lessen the impact of heavy rains and reduce flooding. Dead trees, leaves and bark add organic matter to the topsoil, completing nutrient cycles and replenishing the land. Forests act as natural buffers as well, slowing floodwaters and shielding the coast from hurricane surges. In 2004, Hurricane Jeanne killed more than 3,000 people in Haiti, while the DR lost 19. While other factors undoubtedly contributed to these numbers, the ability of forested coasts and watershed areas to mitigate hurricane damage is undeniable.

The United Nations estimates that “50% of the (Haitian) topsoil has been washed away into the ocean” and that damaged lands have become “irreclaimable for farming purposes." Although nearly 60 percent of the Haitian people work in the agricultural sector, the country still must import nearly half of its food. Even so, nearly 30 percent of Haitian children endure chronic malnutrition.

While Haiti has also suffered from serious political strife since 1960, environmental degradation remains one of its greatest challenges. We cannot continue to view environmental policies as counter to economic growth and human happiness, but as necessary to achieve them. Climate change and an ever-increasing population mean that decisions have to be made now. And the time to think sustainably has come.

We Can Reforest the Earth

What Version of the Hunger Games Will Become Our Reality?