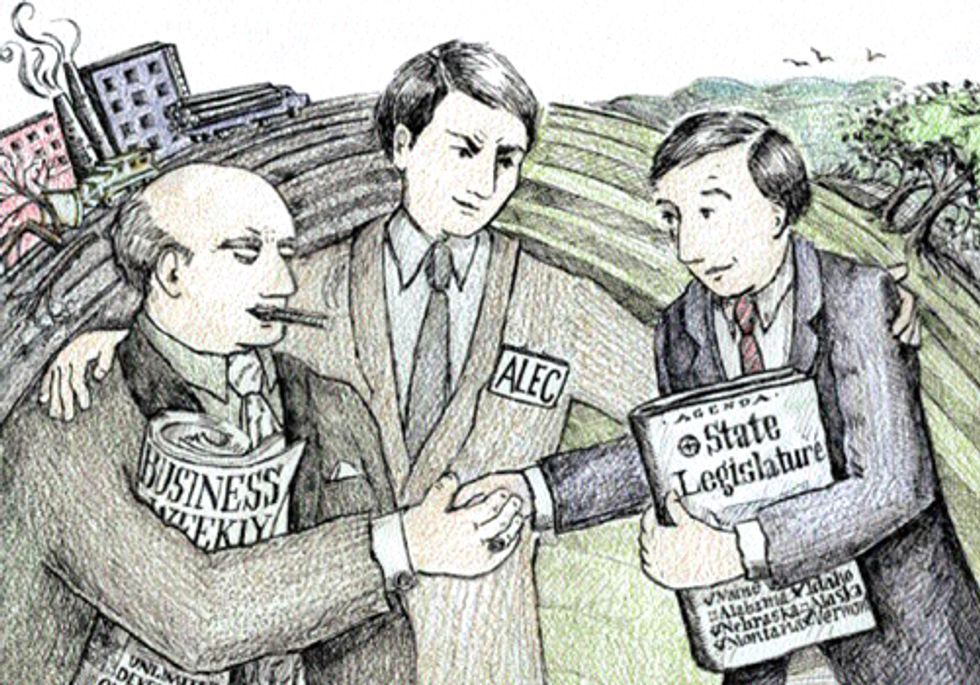 Wake up and smell the frack fluid. But don’t ask what’s in it, at least not in Ohio, cause it’s still not your right to know.

Ohio is in the final stages of making an Exxon trojan horse on hydrofracking into state law, and it appears that the American Legislative Exchange Council (ALEC) connected Exxon’s lawyers with co-sponsors of Ohio Senate Bill 315: at least 33 of the 45 Ohio legislators who co-sponsored SB 315 are ALEC members, and language from portions of the state Senate bill is similar to ALEC’s “Disclosure of Hydraulic Fracturing Fluid Composition Act.”

…disclosure of fracking fluids? On behalf of ExxonMobil?


Frack fluids include unknown chemicals that gas drillers mix with sand and large amounts of water. The mixture is pumped underground at high pressure in order to retrieve gas and oil by fracturing shale formations. These are the chemicals that have caused widespread concern among residents near gas fracking operations, concerns echoed by doctors who don’t know how to treat patients harmed by exposure to chemicals that oil companies keep secret. Oil companies like XTO Energy, a subsidiary of ExxonMobil, the first company lined up to drill in Ohio’s Utica shale.

Concern over unconventional energy like gas fracking may be the reason by Ohio SB 315 also addresses clean energy standards and drilling regulations. While the new law will allow doctors to obtain disclosure of fracking chemicals, it places a gag order on them…meaning some chemicals aren’t disclosed to the public at all (Cleveland Plain Dealer). Instead, chemicals that subsidiaries of Big Oil use during fracking can remain exempt from public disclosure as “trade secrets,” mirroring language of ALEC’s model law.

What’s most suspicious is that seven of the ten Ohio Senators co-sponsoring SB 315 are ALEC members, as are 26 of the 35 co-sponsoring Representatives.*

Four of the co-sponsors of SB 315 attended ALEC’s meeting in Scottsdale, Ariz., although it is unclear which (if any) of them may have been inside the EEA task force meeting the day that the fracking chemical loophole bill was discussed and approved:***

Some co-sponsors became ALEC members in the lead up to ALEC’s late 2011 meeting in Scottsdale, where the fracking disclosure loophole model bill was finalized by ALEC’s Energy, Environmental and Agriculture task force. Emails between representatives of ALEC, an Ohio state legislative aid and Time Warner Cable’s Ed Kozelek show that last-minute recruitment of new ALEC members before the Scottsdale meeting brought in three state legislators who ended out co-sponsoring SB 315 (PDF pp. 71-76): Rep. Lou Terhar, Rep. Brian Hill and Sen. Bob Peterson (who was appointed to the Ohio Senate in 2012).

While more than 50 state legislators have cut ties with ALEC due to its widespread controversies, no Ohio lawmakers have responded in such a fashion. ALEC remains particularly influential in Ohio.

Beyond their involvement in these ALEC task force meetings, Exxon and API were involved in the creation of a similar fracking bill through the Council of State Governments before the ALEC model even existed. As if being a private empire isn’t enough…

ALEC isn’t the only group that peddles corporate-written state laws, as DeSmogBlog’s Steve Horn pointed out in a blog on state fracking bills and the “Council of State Governments.” With direct financial support from Exxon, API, TransCanada and others, the Council of State Governments (CSG) drafted a similar fracking chemical “disclosure” bill two months before ALEC’s was internally approved, although they both appear to be modeled off of a Texas law.

While one of the co-sponsoring Senators of Ohio SB 315, Troy Balderson, is a member of CSG Midwest’s Energy Committee, Ohio politicians aren’t part of the Suggested State Legislature (SSL) committee that vetted the Council’s version of the fracking bill. Because of that disconnect and the overwhelming influence of ALEC politicians sponsoring SB 315, ALEC appears to be the keeper of Exxon’s fracking secrets in Ohio.

Regardless of the varying influence of groups like ALEC and CSG forging Big Business state laws, ExxonMobil is getting what it wants. According to Don’t Frack Ohio!–a project of 350:

Ohio Gov. John Kasich has numerous ties to ALEC and was “involved with ALEC in its formative years,” but he called for SB 315 to include full disclosure of chemicals used in hydraulic fracturing. Senators replaced true disclosure requirements with Exxon’s loopholes and ALEC Representatives decided to leave them.

ALEC legislators have found ways to make their moves harder to track in light of repeated exposure of ALEC’s pollution of democracy in the U.S. over the last year, and sometimes existing state laws don’t help. Ohio’s financial disclosure forms for legislators specifically mention that expenses or reimbursements from ALEC conferences do not need to be publicly disclosed. In Ohio and other states, ALEC dodges lobbying laws through corporate-funded “scholarship” programs that are thoroughly documented by the Center for Media and Democracy through open records requests.

People for the American Way and Progress Ohio report that sponsors of ALEC’s scholarship fund in Ohio got donations from the American Petroleum Institute, Duke Energy, Reynolds Tobacco and other major corporations interested in buying the loyalty of Ohio lawmakers.

I’m sure you’d understand if you were in the same position. Sometimes steak and cigars are more important than energy that doesn’t poison us.

*Cross-referenced between a list of ALEC legislators listed in an Aug. 9, 2011 email from the legislative aid of ALEC’s Ohio State Chairman, Rep. John Adams, obtained through a public records request (see PDF pp. 82-84 and PFAW p.12).

**ALEC documents published by Common Cause show that Sen. Balderson was a member of ALEC’s EEA task force throughout 2011, although Sen. Balderson did not attend the ALEC task force meeting last December in Phoenix, AZ, according to a staffer at his office over the phone, nor is he listed in emails obtained through a public records request as attending the previous meetings in New Orleans (Aug. 2011) or Cincinnati (Apr. 2011). Ohio Senate President Tom Niehaus was a consistent member of ALEC’s [anti]environment task force from August 2010-August 2011, the time period for which ALEC’s EEA task force rosters are available. SB 315 co-sponsoring Representatives Carey, Damschroder and Derickson were all listed as members of ALEC’s EEA task force as of August, 2011.