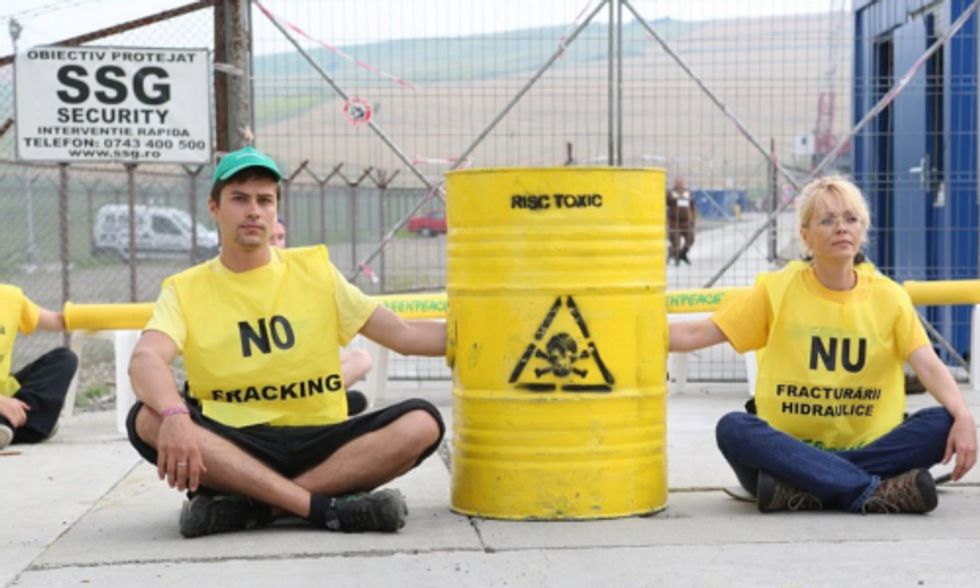 Twenty-five activists from across seven countries, chained themselves to the gates of a Chevron shale gas exploration well in Eastern Romania yesterday, and are calling on the government to ban fracking in the country.

Chevron began work on the exploration well in Pungesti, northeast of Bucharest, in December last year having postponed operations several times due to local opposition.

The protests in the village attracted widespread attention and media coverage last year as villagers, framers, protesters and the community’s religious leaders came together to block the fracking site and halt Chevron’s plans.

For more than two months, the village became the front line of a nationwide battle to stop fracking.

Yet, despite the local council of Pungesti having unanimously voted to ban fracking, the protesters were eventually forcibly removed, amongst accusations of police aggression.

According to figures from the U.S. Energy Information Administration, Romania could potentially hold 51 trillion cubic feet of shale gas. That’s enough to cover the country’s domestic demand for more than a century.

However, rapidly scaling up fracking operations in any country ignores the potential health impacts, water contamination, methane leakage and the threat of earthquakes as a result of the controversial process.

Chevron is the first company to begin exploring for shale gas in Romania and aims to drill more wells in the area. It has repeatedly said it does not plan to use fracking under its five-year exploration program.

But yesterday’s protest aims to highlight the potentially devastating impact on the local community if fracking was allow to go ahead in the region.

The protesters argue that the Romania government has failed to protect the local environment and its citizens by allowing Chevron to explore the area for shale gas and are calling on it to end it support for dirty fracking.