A Year of Resistance—and Why I’m Hopeful for 2018 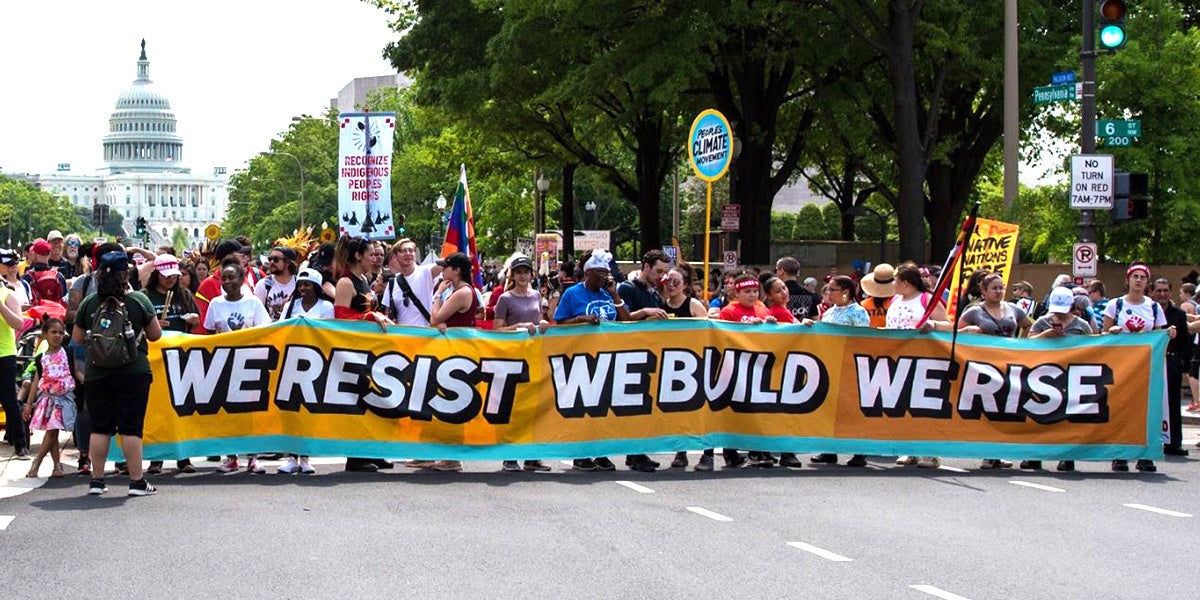 What a year it’s been. The destructive antics of the Trump administration and Congress and a political discourse increasingly polluted by “alternative facts” have frequently made many of us angry, sad and sometimes just plain crazy.

Through it all, it’s been inspiring to see a resistance movement gather strength and show its muscle. I’ve been awed by the work of racial justice activists, scientists, grassroots groups, immigrant rights groups, youth groups and many many others. Here’s a snapshot of what a year in the resistance looked like for me.

The Women’s March (one of the largest protest marches ever, coordinated across the nation and globally), held a day after President’s Trump’s inauguration (with its less-than-record attendance), showed where the true power of the people lies.

Like many of you, I joined the march with my family. Watching my kids (in their pink hats, of course) experience the crowds, point out their favorite signs, raise their voices in call-and-response chants—all of it gave me a thrill to think that a new generation was beginning to understand the power of peaceful protest in a democracy.

And we called out a dangerous new form of climate denial taking hold in the administration, especially with the nomination of Scott Pruitt as U.S. Environmental Protection Agency (EPA) administrator.

In courts across the nation, including in Hawaii, Washington, Virginia, New York, Massachusetts, Minnesota and Maryland, there were immediate challenges filed to President Trump’s terrible “Muslim Ban” executive order issued at the end of January.

As an immigrant myself, it was especially moving to join a large and diverse crowd of people marching in protest in Boston, and to see similar protests nationwide. At many major airports teams of lawyers also flocked in to offer pro bono assistance to travelers affected by the ban. (The Supreme Court has since allowed a modified version of the ban to go ahead but this is by no means the last word since it is still being litigated).

We called out Scott Pruitt’s lies on climate change, held the administration accountable on its rollback of protective health standards including an all-out attack on climate policies, and we urged Congress to resist harmful cuts to the EPA budget (and succeeded in fending off some of the most damaging cuts).

The March for Science March and the Peoples Climate March were the highlights of April. It was magnificent to join the throngs of people marching for climate, jobs and justice on that sweltering hot day in Washington DC. More importantly, we are building a movement that is about more than just that one day.

President Trump’s destructive first budget proposal was shown up to be all bark and no bite since Congress actually controls the purse strings. We campaigned against the many awful elements of the Trump budget proposal, including cuts that would harm our nation’s ability to prepare for climate and extreme weather disasters and cuts that would gut the EPA. (Harmful budget cuts are an ongoing threat. It’s critical for constituents to continue to urge their policymakers to resist deep cuts to agency budgets that jeopardize the health and well-being of Americans).

“We are still in!” declared states, cities, counties, tribes, businesses, investors, faith groups, colleges and universities, in prompt response to President Trump’s shameful announcement that he intended to withdraw the U.S. from the Paris agreement.

Unfortunately, June also brought terrible heatwaves and wildfires, further evidence that the impacts of climate change are here and now, despite the climate denialism rampant in this administration.

One of the most satisfying ways to resist the madness wrought by this administration is to just carry on doing good science. In July, my colleagues and I released a new report, When Rising Seas Hit Home: Hard Choices Ahead for Hundreds of U.S. Coastal Communities. The report highlights the threat of chronic coastal inundation exacerbated by sea level rise, and is accompanied by a fantastic online mapping tool.

Its findings challenge us to work toward solutions at the national, state and local level. Frontline communities facing these risks need help—and this should not be a partisan issue.

My colleagues and I wrote about the flood threats in Houston, especially the risks from toxic pollution and the need to keep environmental justice front and center in the recovery process. We also laid out the science of hurricanes and climate change, and called on Congress to take action to help devastated communities.

And, yes, we also pointed out the irony of the Trump administration’s rollback of the federal flood risk management standard just a week before Harvey hit. And the how damaging the administration’s proposed budget cuts to FEMA and HUD, key agencies for our nation’s disaster response, would be.

Market trends, state policies and federal tax incentives continued to drive a historic transition away from coal to cleaner forms of energy, despite the EPA’s announcement that it would repeal the Clean Power Plan, the nation’s first-ever limits on power plant carbon emissions. We called out Administrator Pruitt’s cynical move to pander to fossil fuel interests while blatantly ignoring the EPA’s mission to protect human health and the environment.

Terrible wildfires raged across Northern California, killing 44 people and causing billions of dollars of damage. Sadly, another example of how climate change is exacerbating risks to people and property.

I was in Bonn, Germany for COP23, the annual UN climate talks, where the Trump administration was rendered largely irrelevant and isolated in its stance on the Paris agreement. Every other nation is steadfastly committed to the agreement, and the “We Are Still In” coalition of U.S. sub-national actors was there in full force to reiterate that the nation’s clean energy and carbon-cutting progress will continue despite the retrograde actions of the Trump administration.

As we close out the year with the passage of a deeply unjust and harmful tax reform bill and a sober reckoning of this year’s record-breaking disasters, including wildfires and hurricanes, there are lots of reasons to be very concerned.

Yet, there are some bits of good news too. The terribly destructive Thomas Fire in California is finally under control, for one. I also see signs all around that the resistance is alive and well–and gathering steam.

What gives me hope for 2018 is that Americans from all walks of life are now awake to the threats this administration poses to our democracy, our health, our climate and basic human rights—and we’re fighting back! Our movement is strongest when we work together, connecting our work to people’s daily lives and concerns, and specifically aiming for solutions that are just.

The wins may not come easily and there’s a lot of work ahead. This administration’s attacks on science and our core values will very likely continue. But they are helping to forge our resistance and build its power. (Not to mention inspiring reams of incredibly biting, funny, incisive political satire–humor is sometimes the only way to handle the farcical extremes we’ve experienced this year!)

I hope you’ll share your moments of resistance in the comments section. A peaceful new year to all.

Rachel Cleetus is the lead economist and climate policy manager with the Climate and Energy program at the Union of Concerned Scientists.