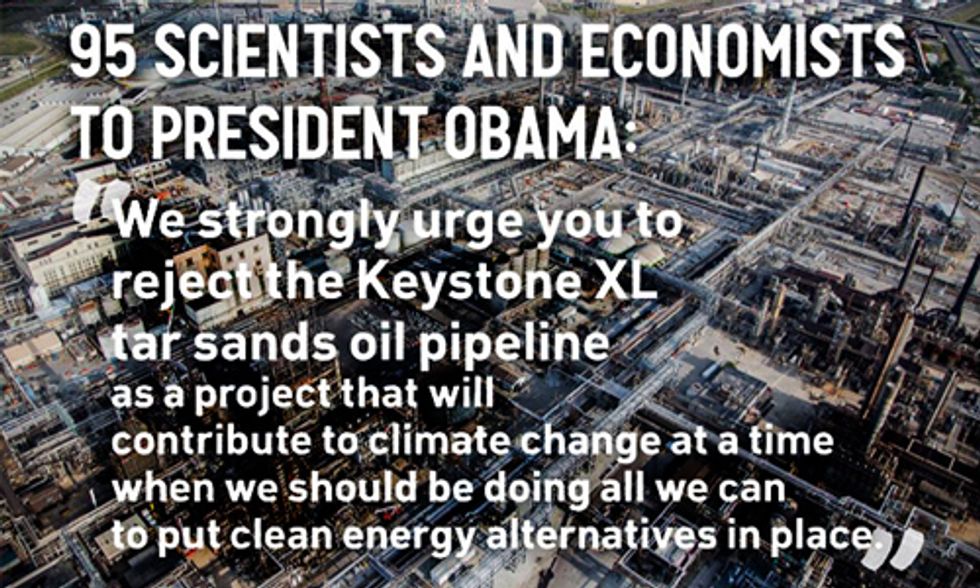 Yesterday, 95 scientists and economists released a letter urging President Obama and Secretary Kerry to reject the Keystone XL tar sands pipeline, calling it a "step in the wrong direction" if the Obama administration is serious about addressing climate change. The letter draws upon comments President Obama made at Georgetown University in June 2013 when he stated, "allowing the Keystone pipeline to be built requires a finding that doing so would be in our nation's interest. And our national interest will be served only if this project does not significantly exacerbate the problem of carbon pollution." As the scientists and economists confirm in the letter, "...now more than ever, evidence shows that Keystone XL will significantly contribute to climate change."

As the letter explains:

"[T]he [pipeline's] potential incremental annual emissions of 27.4 MMTCO 2e is more than the emissions that seven coal-fired power plants emit in one year. And over the 50-year expected lifespan of the pipeline, the total emissions from Keystone XL could amount to as much as 8.4 billion metric tons CO2e. These are emissions that can and should be avoided with a transition to clean energy."

The letter released yesterday follows up from an April 2014 letter from scientists and economists that also articulated Keystone XL's detrimental impact on climate change mitigation. That letter, like this one, called on Obama and Kerry to reject the project. Since last April, the case for rejection has only strengthened.

In January, the Nebraska Supreme Court's decision confirmed the pipeline's planned route, which re-initiated the State Department's National Interest Determination process. In this process, the State Department, in consultation with eight other agencies, considers factors like environmental concerns, foreign policy, and cultural impacts to determine whether the proposed project is in the national interest. In its comments to the State Department released last week, the Environmental Protection Agency (EPA) wrote that tar sands is far more fossil fuel intensive than conventional oil and that, given low oil prices, there would likely be no economically viable alternative means for transporting tar sands to the U.S. Once the State Department makes its determination, Secretary Kerry will recommend his decision to President Obama. Obama will then make the final decision on whether Keystone XL should be rejected or approved.

In addition, since the April letter, oil prices have plummeted, making Keystone XL's potential impact on climate change even more pronounced. As the EPA noted in its commentary, the transportation of tar sands by rail is not an inevitable, or possibly not even a feasible, alternative to a pipeline. As the State Department concluded in its Final Environmental Impact Statement (FEIS), were oil prices to fall to between $65 and $75 a barrel, the fact that rail transport is more expensive "could have a substantial impact on oil sands production levels—possibly in excess of the capacity of the proposed project."Currently oil prices are between $50 and $60 per barrel.

Nevertheless, even were oil prices to rebound, the signatories of today's letter state, Keystone XL would still have a substantial negative impact on global climate change.

The slew of prominent scientists and economists from across the U.S. and Canada who stress Keystone XL's implications for climate change include Nobel laureates, fellows of the American Academy of Arts and Sciences (AAAS), fellows of the Royal Society of Canada, and, yes, Bill Nye. The following is a small sample of the signatories:

This letter further confirms the growing evidence that the Keystone XL tar sands pipeline would be an environmental catastrophe. If President Obama and Secretary Kerry are serious about addressing climate change, they should take the letter's warnings to heart and lay the issue of Keystone XL to rest by rejecting the project.