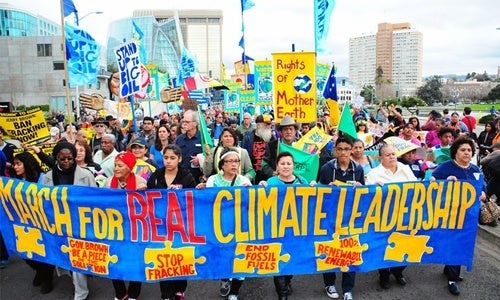 One year ago, we did something pretty dang incredible. Over the course of a few months, we coordinated a massive march and rally to highlight that fracking is not only insane and dangerous, but that our water, our climate and our communities in California are in danger from fossil fuel extraction and suffering as a result. More than 8,000 people converged in Oakland for the largest-ever mobilization against fracking in U.S. history. 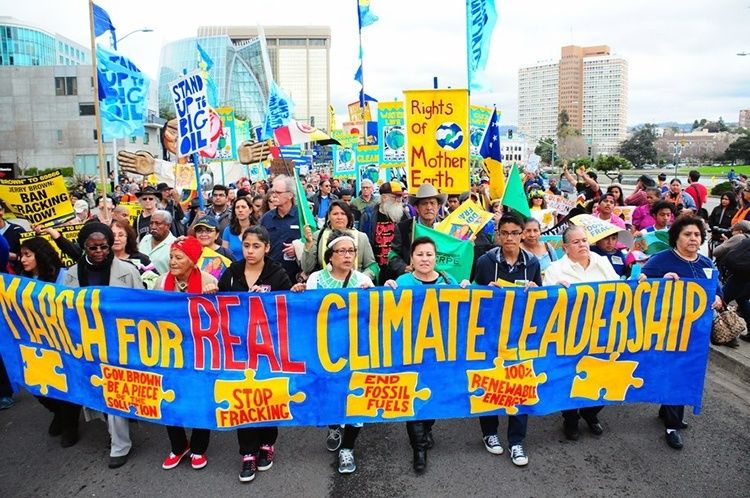 8,000 people marched in Oakland, California on Feb. 7, 2015 for the largest-ever mobilization against fracking in U.S. history.

I spent the weekend reflecting on this action, the lawsuits, marches, hearings, rallies and press—and taking stock of our progress to move the governor of California to take a stand against oil and gas and to ban fracking.

We’ve built a strong movement and made some important progress, but we still haven’t reached our ultimate goal. I’m still scratching my head to figure this out, but part of me believes that we have an overwhelming problem and that maybe people still don’t know how bad it really is.

The governor of California, Jerry Brown, loves to talk a big game about climate change. We applaud him for that. Unfortunately, his half measures are in fact the most any governor has done on climate in the U.S. But just because we’re getting something, doesn’t mean we shouldn’t hold him accountable for his poor decisions on fracking, urban drilling and regulatory oversight.

The reality is, we’re not in a good situation in California. I’ve been told I’m not fun at parties anymore and that the quickness that I can drop the mood from happy to “Why are you telling us this,” is roughly 5 seconds. I’ll attempt to do that here to give you a sense of where things are and why I’m more motivated than ever to double down on the campaign to ban fracking California.

The Internet loves a list and so do I, so here it goes:

We are irrigating our crops with benzene and arsenic laden wastewater left over from oil extraction. Wait what!? Yep, you heard me. California feeds the nation and right now we are feeding them poison. Here are some articles on it: NY Times, CCTV. Spoiler alert: those easy-to-peel mandarins you love to eat? Many aren’t grown using freshwater, but rather wastewater from the industry. And they’re not the only foods getting the oil wastewater treatment … read more here.

2. No Area is Off Limits

A father in Kern County has sued Gov. Brown for putting his daughters in harm’s way by allowing fracking at their public schools (more details of the case can be found here). The short version is that the governor and head of the Division of Oil, Gas & Geothermal Resources are using Latino children as the test subjects for fracking and other drilling technologies. Students go to school next to fracking wells. They live next to fracking wells. Communities with some of the worst air quality in the country are playing on playgrounds right next to oil wells. And there is no legal limit on how close industry can drill from where people live, work and play. Kern county is home to about 99 percent of fracking in the state and is also the fruit basket for the rest of the country supplying a quarter of the nation’s foods and 1/3 of all agricultural land in the U.S.