7 Arrested in Solidarity With the People of Porter Ranch 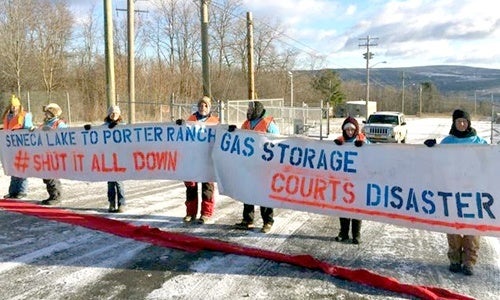 In his famous Letter from a Birmingham Jail, the Reverend Martin Luther King, Jr., wrote, “Injustice anywhere is a threat to justice everywhere.”

In that spirit, and as part of the ongoing civil disobedience campaign against gas storage called We Are Seneca Lake—of which I am part—seven protesters from six different New York counties declared their support for the residents of Porter Ranch, California, where a massive leak from an underground gas storage facility has sickened and displaced thousands of families and shows no sign of abating. 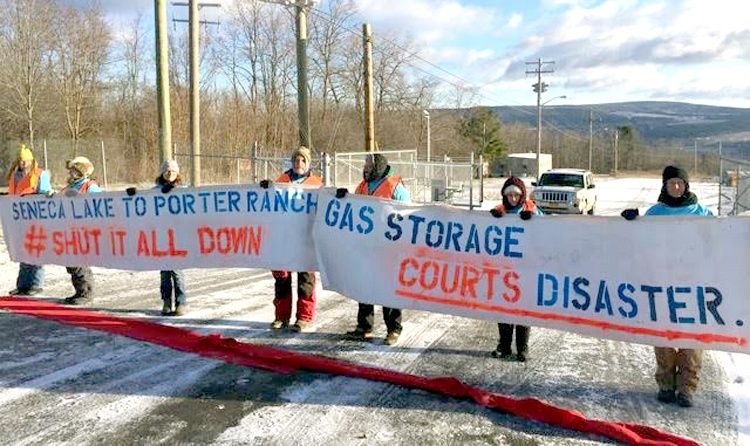 The seven formed a human chain across the north entrance of Crestwood Midstream on Route 14 at8:45 a.m. Monday morning. While blocking all traffic entering and leaving the facility, the group offered a statement of solidarity with the people of Porter Ranch before their arrest by Schuyler County deputies at 9:15 a.m.

The blockaders held banners that said, “Seneca Lake to Porter Ranch: Shut It All Down” and “Gas Storage Courts Disaster.”

All those arrested were transported to the Schuyler County Sheriff’s department, charged with disorderly conduct, and released. The total number of arrests in the sixteen-month-old civil disobedience campaign now stands at 467.

The uncontrolled gas leak at the Aliso Canyon gas storage facility—the single largest in the U.S.—was discovered on Oct. 23, 2015. California Gov. Brown declared a state of emergency on Jan. 6. Thus far, more than 2,500 families have fled their homes and more than 1,000 children have been relocated to other schools. Health officials now acknowledge they initially underestimated the scope of the gas leak and the possible attendant health risks. Self-reported health complaints include nausea, dizziness, vomiting, shortness of breath and headaches.

As We Are Seneca Lake protesters noted in their declaration of support, the massive gas leak at Porter Ranch is a problem with no end in sight and no obvious solution: “People of Porter Ranch, we know your lives were upended because no one replaced a safety valve at the bottom of the well. We don’t believe we have bottom safety valves here either … What affects you directly today could affect us directly tomorrow.”

Elizabeth Peet, 48, of the Town of Hector in Schuyler County, said, “Today as we celebrate the birthday of Dr. Martin Luther King, Jr., I am reminded that my civic responsibility includes civil disobedience while my elected officials continue to fail to protect our lake and surrounding communities from dangerous gas storage expansion.”

Michael Black, 63, of Lakemont in Yates County, said, “I was born in Schuyler County and have lived on the shores of Seneca Lake for nearly a half century. I now live seven miles from Crestwood. What happens here happens to me as well. If the gas storage facility here were to leak—as is happening in southern California—I could be in danger. If it explodes I would likely be killed.”

The We Are Seneca Lake movement opposes Crestwood’s plans for methane and LPG storage in lakeside salt caverns and has been ongoing since October 2014.

Below is the full text of the message that I delivered to the people of Porter Ranch on behalf of We Are Seneca Lake. And you can watch my statement via video here:

Seneca Lake Stands with Porter Ranch: Shut It All Down!

In his famous Letter from a Birmingham Jail, Martin Luther King, Jr. declared, “Injustice anywhere is a threat to justice everywhere. We are caught in an inescapable network of mutuality, tied in a single garment of destiny. Whatever affects one directly, affects all indirectly.”

Today, on the national holiday celebrating the birth of Dr. King, we gather near the shoreline of Seneca Lake in New York State, on a simple driveway to make our own declaration.

This is not just any driveway. It’s contested ground. In the last 16 months, there have been 460 arrests on this strip of pavement for civil disobedience in objection to the expansion of underground gas storage in old salt mines on the banks of our beautiful lake. Some of us have gone to jail.

Today, we affirm our network of mutuality with people who live three time zones away in a California community called Porter Ranch.

The wind chill on this hillside is minus one degree, and we are cold. But we know that people of Porter Ranch are suffering magnitudes more. The leak from Aliso Canyon underground gas storage facility near Porter Ranch has been pouring 1,000 tons of climate-killing methane into the air every hour for the past three months. We all share the same atmosphere.

We know that the fumes from this single leak have sickened people and dropped birds, dead, from the sky. We know that the risk of a massive fire is so great that planes cannot fly over the site and cellphones and watches are forbidden on the site.

Meanwhile, seven different efforts to plug the faulty well that is the source of the leak, has only further destabilized the situation, expanding a crater around the wellhead that threatens the possibility of a full blow-out. And the attempts by Southern California Gas to drill a relief well will take at least six more weeks—and may not work either. These are hard truths to hear. But we hear them.

And we watched closely last Friday when people gathered in front of the Environmental Protection Agency offices and urged the EPA to entirely shut down the Aliso Canyon gas storage facility, which is not a specially engineered tank but simply a big hole in the ground left over from drilling and extracting oil. The people said, “Shut it all down!”

So, we want you to know that we are listening. And we, who stand right now, right here, on top of decrepit salt caverns that are slated to serve as storage vessels for massive amounts of pressurized gas echo your words back to you. Like your depleted oil field, our salt caverns were never engineered to hold natural gas either.

People of Porter Ranch, we know your lives were upended because no one replaced a safety valve at the bottom of the well. We don’t believe we have bottom safety valves here either.

Seneca Lake and Porter Ranch are tied in a single garment of destiny. What affects you directly today could affect us directly tomorrow. We look at the myriad injustices that you are now compelled to endure, and we see our own future.

Martin Luther King urged us to confront injustice and bend the arc of history in another direction. And he gave us some tactics to use in our efforts. One of them is non-violent civil disobedience. That’s what we are doing today. We do it to amplify your own message. And we do it in the fervent hope that we can change our story, that there will be no Porter Ranch at Seneca Lake.

We Are Seneca Lake and we join you in saying, “Shut it all down!”